The relationship between me, music and Apple is ... complicated. Music has sustained and excited me since I was a kid. I still listen to it every day and I still regularly pay money to hear it. With a single early exception, every computer I've ever used has been an Apple product. I cannot imagine working on something else. In the past week I've used five different Apple devices.

And yet, I hate the iTunes Store. I'll try anything to avoid purchasing from that dull, barren place and I'm offended by its refusal to sell me lossless files. I can live with the iTunes application itself, although I know it's a different matter for those who must endure it on Windows. It has some major flaws – how could they get something as important as search so wrong? – but no alternatives I've played with have moved me to switch.

So it was always likely that I'd have mixed feelings about Apple's long-awaited launch of a streaming service in the form of Apple Music this week. And I really do.

For starters, Apple has pretty much laid a turd with its three-month free trial for Apple Music. The trial period will be free to users, which is sensible – but it will also earn zero dollars for artists and labels. Who would release an important record in the three months from the Apple Music launch on June 30, in the knowledge that it will not only earn them nothing on Apple Music, but will suck a lot of revenue out of both the iTunes Store and Spotify?

Really, Apple's cash reserves are almost exactly the same as New Zealand's annual GDP. You'd think it could take the hit on this one.

Actually, it's probably the case that the three major record companies have reached an agreement with Apple over this, and it's just the indies out in the cold. One industry publication is saying that it's still possible that Apple Music could launch without important independent labels like XL, Matador and Cooking Vinyl. So, no Adele, Arctic Monkeys or The Prodigy.

But one story it seems safe to discount is that Apple will pay out a markedly lower share of streaming revenue than the 70% Spotify says it redistributes. Digital Music News has backed down on its story to that effect, and granted that Apple Music may even pay out a larger revenue share than Spotify.

In the cause of a fairly messy onstage launch, Apple ushered on Drake to pump up Apple Music and, more particularly, Apple Music Connect, the service that will let artists share things directly with fans – demos, exclusive recordings, pictures, videos and news. Apple's MySpace, if you will. In his five minutes on stage, Drake said this:

Connecting with an audience has never been closer and more reachable than right now. See now, we encourage you to spend the time on your body of work, spend the time on your craft, assemble the right body of work – and instead of having to post your stuff on all these different and sometimes confusing places, it all lies in one very simple, very easy place. And that is Connect.

Apple is pitching young artists the idea of only being present in one place, reaching one audience, as if it's actually a desirable thing. Meanwhile, out in the real world, you can upload your stuff to Soundcloud, Bandcamp or YouTube yourself and all those sites have embeddable players that will let it be present in your own blog, or someone else's, or on your Tumblr or Facebook. You can set up and start selling on Bandcamp all on your own. Telling a kid that this is "sometimes confusing" and Daddy Apple will keep everything make it all better for you is very patronising.

It's not just me choosing to bang on about artist discovery and bedroom producers. In the Apple Music promotional film, Trent Reznor  talks about "combining a catalogue of the world's music with music that's not in that catalogue yet, direct from the artist to you" and making it for "not just the top-tier artists but the kids in their bedrooms too".

Not really, and here's why. You can't upload directly to Apple Connect – or, rather, you can once you're in the door. But to get in the door, you need a label or an aggregator from the fairly short list published by Apple.

There is one listed aggregator in New Zealand, DRM, and they're good people (another business in the same group operates this blog's sponsor, The Audience). Or you could go to one of the international aggregators, like CD Baby or Tunecore, but whatever you do, there are fees involved. And if you've knocked out a Drake cover in your room (ie, exactly how Eddie Johnston/Lontalius made his name on Soundcloud), there's publishing too.

I do appreciate that Apple's onboard music advisors, Jimmy Iovine and Reznor have recognised the importance of direct and informal contact between artists and audiences, but Apple is a mediated and formal space. That's why its social game sucks. The only way it makes sense to have all your stuff in one place is if you're able to share it out to everywhere else.

But while fans will be able to share to Facebook, Twitter and email,  it doesn't seem there will be tools that will let artists use Connect as a sharing hub the way they might use Tumblr. Or any embed code. Or the kind of API access that lets third-party apps run in Spotify (or – shudder – Spotify to be intergrated into DJ applications). As an artist, you're invited to assume that you'll achieve everything you need to inside Apple Music. You won't.

The irony of Apple's "oh-so-simple" pitch is that Apple Music is largely a cobbling together of existing products with the streaming service added on. Connect is another try at Ping, the iTunes social feature that flopped mightily. Apparently, Apple Music, which allows playback of not only a big musical catalogue in the cloud but songs from your own library that you upload to the cloud (say, streaming holdouts like The Beatles or Metallica), doesn't duplicate iTunes Match, which does the same thing. And the iTunes store is still the iTunes Store. It's a little confusing.

And Beats1 is just a better iTunes Radio. Actually it's way better. It will be available in places like New Zealand, for a start. It will be free to listen to (no word on whether there'll be ads). And it boasts a pretty impressive lineup of on-air talent, including New Zealander and former BBC Radio One star Zane Lowe. I'll certainly give that a listen. I think the element of of human curation embodied in Beats1 and across the other services will work well. I'd find that more appealing that yet another algorithim.

It seems notable that Iovine indicated to the Guardian that Apple Music is taking on not only Spotify, but radio itself:

“What’s happened to the music industry, from my perspective, is a lot of great music is behind the wall that can’t get through, and therefore a lot of artists are getting discouraged. And we hope that this ecosystem really helps revive that.”

Despite the criticisms above, I think Apple Music will do well. Apple has a financial relationship with hundreds of millions of people. Given Apple's push into China, it's probably going to get to a billion before too long. These are people who largely already spend money with Apple. The people who have made the iTunes Store the overwhelmingly dominant retailer of digital music. That's quite a different position to be in than Spotify trying to convert its free listeners to paid.

I also think a shift in the subscription streaming market from advertising-supported to paid will be good for music. The ad-supported model is never going to sustain the music industry.

Moreover, I will be an Apple Music customer. I pay for Spotify now, but my loyalty to Spotify is zero. I hate its user interface. I'll cancel my Spotify account on day one and enjoy three free months, probably on Apple's attractively-priced family deal ($18.99 a month vs $12.99 for a solo account).

But it won't be all I need.

It's a shame that Real Groovy Records will have to move by January because its landmark building has been sold – the more so because, as Chris Bourke points out in a nice blog post, the musical heritage of the site is so rich.

But I shopped at Real Groovy before it was in its current home and I'll do so wherever it goes next. K Road would seem to fit.

Actually, it's K Road I'm worried about. The very soul of the strip, St Kevin's Arcade, has been bought by a new owner and it looks like they're going to turn it into Ponsonby.

Well, that's the worry, and for all his fine words to the Herald, Paul Reid, the face of the new owners, hasn't exactly got off on the right foot with the arcade's current community by, I'm told, making an appearance as a drunk do-you-know-who-I-am dick at Whammy Bar recently.

But the building won't, and can't, be demolished. It's just that phrases like "the new Ponsonby Central" make the locals feel unwell.

Reid was formerly the frontman of the band Rubicon and played the wayward Marshall Heywood on Shortland Street. Alex Casey at The Spinoff has done what needed doing and studied Marshall's character for clues as to his plans for the arcade.

UPDATE: I'm told Paul Reid has said he definitely doesn't want to turn the arcade into Ponsonby Central, just to refurbish and restore it, and more particularly he has no plans to do anything to Wine Cellar/Whammy. Benefit of the doubt, I reckon.

Speaking of Real Groovy, I'm spinning a few discs there on Saturday June 27, as part of their Saturday DJ thing. I'm on at the store from 11am till 1pm – and then that evening, from 7-11pm, I'm playing a bunch more tunes at Golden Dawn. This is very exciting and you all have to come.

The singular Dudley Benson is crowdfunding to complete his third album, Zealandia. There's a Stuff story on the project, and Dudley explains it himself in this video:

The Newmatics have been back making music together – and they have an album launch show next week: 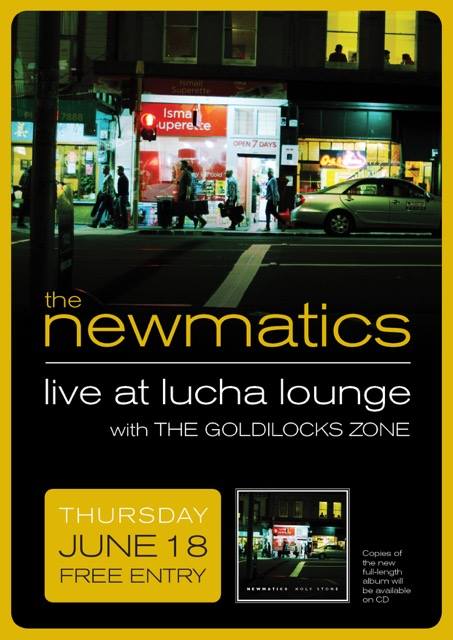 Gareth Shute has done a Top 10 New Zealand Political Songs for Audioculture. Oddly, he mentions Shihad but makes no mention of their highly political most recent album FVEY.

The sophisticated Auckland gentlemen of Leisure have dropped another tune. It's smooth, naturally:

Basement Tapes is back and he has a new EP, Loving Me, due for release soon on New York label Ralenteer Records. Here's the first single:

Also, this moody, graceful thing from Idio, who recently had the odd distinction of having their last single, 'Sway', covered on X-Factor (click through for a free download):

And finally, last Saturday night I went to a great gig at Neck of the Woods in memory of Daisy Ram. It was an eclectic bill in what now seems to be the Auckland style – from the blazing rock 'n' roll of Rackets to a hugely enjoyable funky fresh set from Tyra Hammond, with the tireless Jeremy Toy on gadgets.

Tyra goes one better in Wellington tomorrow night, playing the Matterhorn with a full band, including the redoubtable Chip Matthews on the bass guitar. I'd go if I were you, Wellington, I really would.

Meanwhile, here's her soulful, surprising cover of UMO's 'So Good at being in Trouble':

That's from the new Tyra Hammond EP, which you can pick up for a mere $8 on Bandcamp.

Oh wait ... one more thing. Bandleader James Last left us this week, at the age of 86. His records filled the radiograms of our parents. Here he is with the orchestra covering Hawkwind's 'Silver Machine'. Fuck yeah.