Jed Town has been through a few musical guises: Beatlesque punk rocker with The Features, and then everything from confronting experimentalist to electronic raver as Fetus Productions. But through it all there's been a continuous thread of melody.

And that thread has never been as evident as it is in his current band, Ghost Town. This video for 'Make it', from the album Sky Is Falling – shot on Super 8 film! – provides a moody, grainy accompaniment to what is a remarkably sweet song.

Now that I have my tickets (after paying a wtf $10.78 in booking fees) I guess I can safely tell you about Nadia Reid's show at the Hollywood Cinema on June 16. The evening will also feature songs from Anthonie Tonnon, poetry by Courtney Sina Meredith drinks by Garage Project and food by Lord of the Fries and trailers and curiosities on 35mm film by John Lily.

It's Nadia's last show before she heads off to Europe for a while. Her second album, Preservation, continues to reveal more of itself the more I listen to it and I'm really looking forward to hearing the songs played live. Here's the most recent video from the album, 'Richard'.

The 19 year-old South London rapper Dave didn't choose his name for easy googling, but I saw him perform this song, 'PictureMe', on a recent Later With Jools Holland and was quite struck by it. It's a dense, flowing meditation on life choices, beautifully captured here here as a video by Lx. He has a new album out soon.

If you live in Wellington and go out a bit, you probably know about DJ Bill E's Atomic and 24 Hour Party people nights at the San Francisco Bath House. He has a special one coming up next Saturday the 27th: 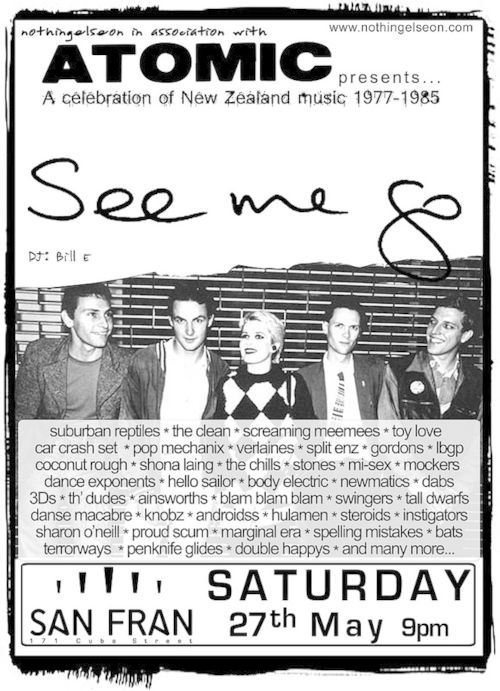 And guess what? I have three double passes to give away to Public Address readers (it's only $10 on the door anyway, but that's like a whole extra drink at the bar, right?). Just click the email link at the bottom of this post and mail me with "See me Go" in the subject line.

Followers of the way and the truth in rock 'n' roll may care to know that a documentary about Australia's legendary Radio Birdman is nearing completion – details here from a newspaper in Birdman's spiritual home, Detroit. There's even a  trailer:

Meanwhile, just because it's awesome, this guy cut together a video Birdman's immortal 'Aloha Steve and Danno' from actual episodes of Hawaii  Five-O.

The 95bFM Top 10 is pretty fly right now. Number one this week is 'My Smile Is Extinct' by Kane Strang. It's from the forthcoming album Two Hearts and No Brain. Kane's currently touring Europe.

Number two is '030' by Suren Unka on the Japanese label dos . ing. He's been playing there this month. Note that this is a free download:

And number three is Dirty Pixels' 'Spacesuit', the first song from a forthcoming EP. They're the band of Ethan Moore, the son of Phil Moore of Goblin Mix fame. And I think you can tell he was raised on the right records ...

And finally, I've long loved Daughter's 'Youth', more so in the remix. This popped up in my Apple Music yesterday – a cover by Haux, about whom I know nothing. But I like this ...