We often fill the music we love with dreams and memories; it's one of the purposes of music. On In Colour, the debut solo album by Jamie Xx, it's as if it's been done for us – the whole record sounds like a dream or a memory of some things.

The opening track, 'Gosh', is a reverie patched together with exclamations from 90s British rave tapes, opening a theme that weaves in and out of the album. 'SeeSaw' and 'Loud Places', voiced by Romy, his bandmate in The Xx, are full of longing and the Burial-like 'Sleep Sound' is something on the edge of consciousness. (The Pitchfork review tells you where the samples come from; I shan't pretend to know.)

I've been playing the album a lot in the past two weeks, but it seemed most affecting alone at night in the city: once, driving home at 1am, another time under the lights of a railway platform. It's an album with a mood rather than a narrative, one that seems to make its idiosyncracies (so many steel drums) seem natural and I think it's my favourite long-player of the year.

If you can't get to an actual record store, allow me to recommend Bleep.com as an online store.  Because you want this stuff lossless.

Speaking of record stores, I'm playing various vinyl tomorrow, from 11am to 1pm at Real Groovy Records in Auckland.

And then tomorrow evening, I'm playing all kinds of stuff from 7pm to 11pm at Golden Dawn in Ponsonby. Come along!

Also, a word for The Sherwood in Queenstown, where I did some DJing last Thursday night. It was a quiet night, but a very pleasant one, and if the staff at the Sherwood could be any nicer, I'm damned if I know how. Nice place, nice people.

On the basis that the trailer below is there now, I'm expecting that the reportedly brilliant and unflinching Nina Simone documentaryWhat Happened, Miss Simone? will turn up on Netflix NZ within the next day or so. (If it doesn't, you probably know what to do.)

A rather promising snippet from the newly-announced New Order album, Music Complete, due in September. No, they still haven't sorted things out with Hooky.

From John Dix's wild memory of Bruno Lawrence, published this week on Audioculture:

Bruno loved the psychedelic drugs and he never subscribed to the hippie ethos that they were just stepping stones on life’s spiritual journey. He got as far as acid and stayed with it.

We tripped at concerts, the golf course, the movies (I can’t watch Glenda Jackson to this day without flashing back to the Lido in Wellington, where the usherette told us to be quiet, it was nota comedy). I don’t recall tripping at the racetrack but we did go to the Whanganui greyhounds, where I was convinced that a tumbling dog had been hit by a flying bottle (Bruno persuaded me not to report it). I accompanied him to an awards ceremony where everybody was so pissed no one noticed our increasingly aberrant behaviour. Bruno’s attempt to gee up the Members Stand at the Basin Reserve with a haka was a highlight; Bruno giving a bunch of rugger buggers in Lancaster Park a halftime discourse on the game was not – “Imagine the ball as a lump of shit and the players as flies.”

It turns out that I wasn't the only kid who remembers Bruno's BLERTA roadshow coming to a country town. For me, it was looking up in the playground at Grey Main school some time in the early 70s and seeing the BLERTA bus roll past and getting really excited, to the bemusement of my friends. For Sandra Bell, as told to Syd Newman in her new profile on Audioculture, it was seeing them play in the domain at Taupo and knowing "I was one of them". 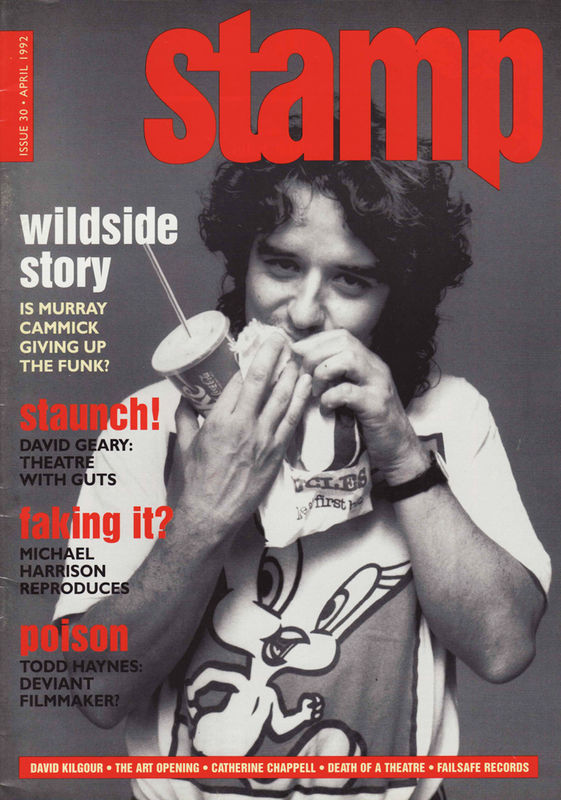 In radio-style content, Mark James Williams (aka MC Slave) interviews Ladi6 about her life and work –– including the memorable story of playing in a Brazilian favela – with her own music as accompaniment. Nice.

And from the Radio New Zealand Music team, Zac Arnold talks to Boycrush, aka Alistair Deverick, about being a man in New Zealand.

Bic Runga has dropped sixties references into her recordings before, but maybe never as lavishly as she does amid the California dreaming of her new single, written and produced with Kody Nielson. It's like the Fifth Dimension had a pretty baby:

Yeah, there have been a million remixes of Destiny's Child's 'Say My Name' ... but this little two-step number is just a beauty. The Golden Dawn crowd will definitely be hearing this tomorrow night (click through for the download link):

Red Bull Music Academy named its Class of 2015 this week: 61 artists from 37 countries whole converege on this year's base in Paris(!) to listen, learn, collaborate and produce. There are two New Zealanders in the class. You'll have heard plenty hear about Eddie Johnston (aka Lontalius, aka Race Banyon), but the other has been flying much further under the radar. k2k is a young woman called Katherine, from Wellington. Here she references Bryan Adams' 'Heaven' (no, really):

Meanwhile, Red Bull Studios in Auckland is running a competition to remix Chelsea Jade's 'Night Swimmer', and the results are quite brilliant. You can find all the entries on Soundcloud via the #CHELSEAJADEREMIX hashtag. These two are taking my fancy.

Laura Lee, formerly of Auckland shoegaze band O'Lovely, has struck out in quite a different direction with her debut solo single. Some deets from Martyn Pepperell here.

The extremely reliable RocknRolla Soundsystem have another rework. This very fat blues groove was recorded by the Allman Brothers' slide guitarist Derek Trucks from the Buddy Guy original. (Hit the shopping cart icon on the player to buy it from Bandcamp.)

If you've ever turned over your copy of the New Order 'Blue Monday' 12", you'll know that it's an instrumental dub of the A-side called 'The Beach'. Huddersfield's finest, Jamie "Fatneck" Low, has posted his nice rework of the tune and it's available as a remastered WAV file (just click through to see the download link):

Another free download: a dub of a track from the new Seun Kuti remix EP.

And from another place entirely, this bright, sprightly summer-in-the-winter pop track from Auckland's Rasela. Insanely catchy (click through for a download):

And finally, the Orb released a new album this week! According to Alex Patterson, Moon Building 2703 AD "is inspired by this place called Earth and the idea that in the future mankind discovers its root element in the ancient rocks on solar moon, which are based on musical harmonies, that despite being imprinted a billion lights years ago, are set to the same tempo as the Orb." Righto then. You can get the album in multiple formats at Bleep.com (including a vinyl version that contains a bonus track in tribute to J Dilla) and in the meantime, here's a downloadable hour-long mix they just did for the Data Transmission podcast.