I was standing watching Beach House's spellbinding performance at Laneway on Monday when I thought about how remarkable it is that this annual new music festival has become so much about women. Beach House's Victoria Le Grand was commanding the stage. We'd just come over from Grimes' wild pop show, and before that, Courtney Barnett leading her rock n' roll band. We would move on to QT playing her crazy beats in the Thunderdome, then stroll past Lauren Mayberry leading Churches before a rapturous crowd.

How great, I thought, that all the young women in the crowd could see themselves reflected in the headliners, and dance and sing back the words they heard.

I carried on thinking like that until yesterday when I saw the fallout from TV3 reporter Kim Vinnell's live cross, when two yobs gatecrashed yelling "Fuck her right in the pussy" (it's a particularly sad and unfunny meme that began as a hoax). She was shocked, understandably – the first response of a reporter in that situation is that they've exposed their employer to trouble – and somewhat intimidated.

But she was able to identify the young men and yesterday tracked them down to ask what the hell they were thinking. Spoiler alert: they weren't thinking much. "After a 12-box of Billy Mavericks, those sort of things aren't being processed properly through my head," explained one of them.

You may not have ever encountered it, but Billy Maverick Bourbon and Cola, described in marketing material as a "no nonsense drink", is a 7% alcohol premix made by Lion Nathan. The company used to ship this particular alcopop at a staggering 9%, but reduced its strength a couple of years ago as part of an industry attempt to fend off stricter regulation. These men and their friends had preloaded.

When Vinnell pointed out that, alcohol or no, this kind of behaviour was threatening to women, the slightly taller dullard said this:

"Yeah, but next time have a male presenter if you're going to a Laneway festival, because shit like that gets pretty hectic."

Staggeringly, whoever was at the editing controls at Stuff thought this view was worthy of a reader poll in this story (thanks to Jessica McAllen for the screenshot): 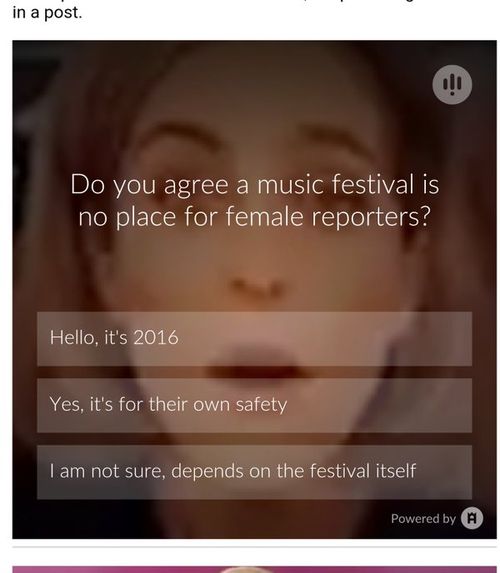 I'm deeply disappointed that someone who is allegedly a journalist would even have considered publishing that, let alone actually done it. Someone with judgement apparently became aware of it and the poll was eventually removed from the story.

I was still thinking about it this morning when I saw this comment by my friend Jean Hughes about what happened to her on Monday at Laneway. Jean is an older woman. She's also a music fan – to an extent that sometimes puts me, the music blogger, to shame – which is why I asked her to write up her Laneway tips for Friday's music post. She was so up for Monday, and then her day was ruined:

By then it was time to get a good position for Courtney and in doing so were close to Hermitude who I did like more than I thought I would.
Then it all got a bit messy and my day was kinda spoiled.

A young arrogant out of it man and his female sidekicks thought it would be fun to bully a couple of older women – me especially. Not content to trying to grab me about my person, calling me Grandma, he tried to simulate sexual goings on with me and asked the young equally out of it lads around us who wanted to “fuck Grandma” Not nice when you are all so close to each other. He stopped when my friend, turned and punched him in the stomach, totally surprised a ‘Grandma’ could do such a thing, after nicely asking him to cease. And his gal mates laughed and giggled along with the play – female solidarity obviously unheard of.

We moved away and almost immediately another young, out of it idiot set his sights on us – heckling, poking, pointing and coming up really close – no amount of ignoring him would get him to stop. Again he had the backing of his mates, male and female and they just went on and on. By then Courtney was on and we did really want to listen and enjoy and happily she was not their cup of tea or they found someone even older or more female to bully and off they went, not before pointing two fingers at me and saying ’"we will be back"- bullies to the end.

After this, even though Courtney had done her best, I felt old, tired and slightly emotional and went and sat down. Never in all the events I have been to (and there have been quite a few) have I been treated so meanly and unnecessarily so.

To say I'm angry about this is an understatement. But sadly, it's not unique. I've heard via Genny Stevens on Twitter about this happening at Rhythm & Vines. Same pattern: an older woman victim, drunk, out-of-it young men, the women with them not intervening. She in turn had heard about a separate incident – again, the sexual harassment of an older woman – on Monday.

I understand and applaud the protests against the Return of Kings "pro-rape" creeps, but for me, there's a more pervasive, much more mainstreamed problem here than those self-mythologising freaks.

I don't blame the promoters. It's hard to screen for pre-loading, drinking water was freely available everywhere and the onsite bars seemed properly run and suitably priced (they were almost idle by 7pm anyway). The group that harassed Jean and her friend evidently had other drugs too, but it's impossible to aggressively body-search for those at the gate and, for a number of reasons, not even a good idea.

It's also very difficult for venue security or police to see these things and intervene when they happen deep in the crowd. You rely on the decency of the crowd – which, for most of us, was well in evidence on Monday. Jean agreed that the vibe was generally very nice ("I enjoy seeing people enjoy themselves"). Even people relatively nearby in the crowd wouldn't have been aware of what was happening, she said. But, she added:

I was astounded that they would pick on older women in such a sexual way – we even asked them if they treated their mother and grandmother this way – and I am sorry to say they didn’t look that ashamed. I think they are a product of a political leadership that puts down women and cracks cheap bullying comments at will.

The young men who harassed Kim Vinnell were, when confronted after the fact, suitably contrite (well, one was – the other had by that point fled the camera). I suspect Jean's bullies would meekly do the same in the cold light of day. But that's not good enough.

It's not good enough for women to feel at risk because of their age or gender. I understand that's a fact not just at annual music festivals. But there's a nasty undertone of exclusion when it happens in this kind of environment – which can only function on trust. When women who love the music these events are supposed to be about can't trust that they can safely enjoy it. It's already happened to some extent at Rhythm & Vines. What that appalling Stuff poll really said was that we should countenance some cultural events being no-go areas for women.

Fix up, young men. It's no good apologising afterwards for something you knew was wrong, or blaming the booze no one made you drink. And until you can fix up, kindly stay the fuck out of my and Jean's music festival.