Last week, major newspapers carried a full-page ad as part of the campaign for a "No" vote to the referendum question about supporting the Cannabis Legalisation and Control Bill. The ad was authorised by the SAM NZ Coalition, which takes its name from a controversial American anti-cannabis group and includes members of two Scientology front organisations.

I took a photo of the ad in the Herald that morning. 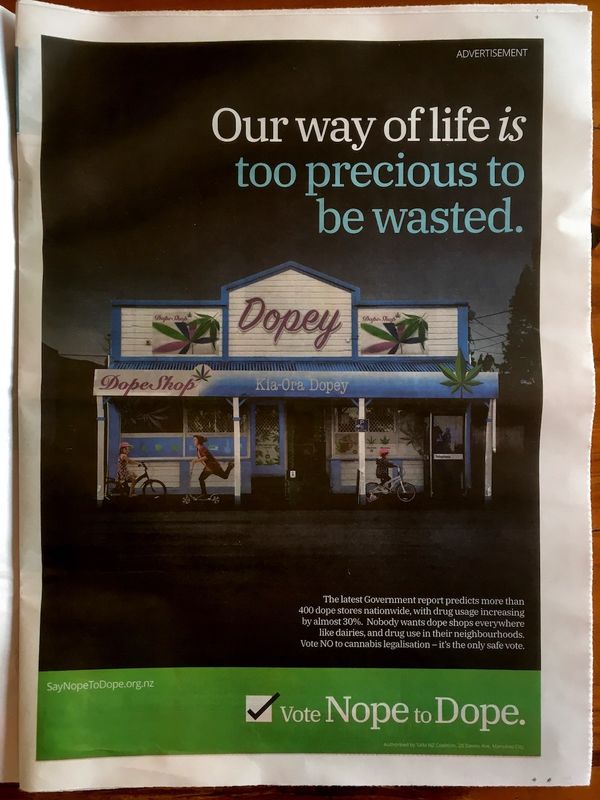 It would be fair to say I was furious about it – my immediate reaction on social media included the words "lying liars". I wasn't alone.

The most obviously misleading elements of the ad are:

- The signs. These would never be permitted under Section 157 of the Cannabis Legalisaton and Control Bill, which prohibits advertising both generally and specifically, including any notice or sign "outside of the place of business of a person who offers cannabis products for sale". A retailer who breached the advertising ban would be fined up to $240,000. The advertising ban has been fundamental to the proposed reform since the original Cabinet paper.

– Licensed cannabis retail outlets would not be "everywhere, like dairies". The bill requires the new Cannabis Regulatory Authority to take into account the proximity of "kindergartens, early childhood centres, schools, tertiary institutions, places of worship, parks, sports facilities, swimming pools, playgrounds, and other community facilities" in drawing up local licensing plans, and to further consult with local residents and businesses and consider "whether the amenity and good order of the territory would be likely to be reduced" by the presence of a licensed premises. Practically speaking, there would not be licensed premises with open doors raced past by kids on bikes and scooters.

– The more-than-400 cannabis outlets comes from an estimate by the economic consultancy BERL in its speculation of a likely regulated market, and relates to the least restricted licensing option – albeit the one BERL favoured as offering the best prospect of supplanting the existing criminal market. (The actual figure is 420, so someone was perhaps having a quiet joke.) But there are ten times that many dairies and convenience stores, so licensed outlets will not be "everywhere like dairies" in that respect either. Or, for that matter, like liquor outlets– there are at least 14,000 of those.

So the depiction of a dairy – which is a manipulated image of a real-life dairy whose local customers aren't happpy about its use – is wholly misleading. But there are other, more subtly misleading elements to the ad. The claim about "drug usage increasing by almost 30%"  relates to the other BERL paper, which does not predict a sustained increase in cannabis consumption. The figure equates to BERL's guess of an initial "short-term spike" as people try out the novel experience of buying cannabis legally, and what effect that might have on the Regulatory Authority's cap on annual cannabis production:

But that could be argued, and the 30-odd complainants to the Advertising Standards Authority regarding the ad presumably looked forward to just such an argument. As it turns out, the argument will not be had.

In an extraordinary decision, ASA chair Raewyn Anderson has blocked the complaints from reaching the ASA's Complaints Board, on the basis that there are "no grounds to proceed". It appears the advertiser was not asked to respond to any of the complaints, so that response will not be relayed to complainants, as might usualy happen. Instead, Anderson has chosen to devise a defence on her own (it's a more able one than the Say Nope to Dope spokesman was able to summon himself when challenged).

The defence on the signage issue effectively amounts to "what do words mean anyway?".

The Chair said the scenario depicted in the advertisement is a subjective interpretation of what a possible future could look like if the Cannabis Legalisation and Control Bill becomes law, and therefore comes under the category of opinion.

The Chair noted that while certain provisions are currently in the Bill, many changes could potentially be made during the Select Committee process, and it is not possible to predict with any accuracy what the final outcome might be. The Chair noted that while the signage on the shop in the advertisement might not comply with the provisions in the Bill, it assisted with conveying the Advertiser’s view of what cannabis retail outlets may look like and how the New Zealand way of life might change if the Bill is passed.

The bill might well be amended in the legislative process, although as constitutional law professor Andrew Geddis has observed, the moral imperative to pass it essentially as voted on would be considerable. But to declare that it is "not possible to predict with any accuracy" whether a central facet of the bill, the advertising ban, becomes law is a hell of a call to make.

And apart from anything else, this is the bill we're voting on. If we can't discuss its text as meaningful, to use it as a point of reference, what's the point of a discussion? By the logic of this decision, SAM NZ could depict 14 year-olds lining up to buy weed at the school tuck shop as its "interpretation" of what could happen if the "Yes" vote carried.

On the "short-term spike" issue, Anderson acknowledges that the ad presents a 30% increase in consumption without noting that on the same basis as it expects the spike (the experience of other jurisdictions) and in the very next sentence, BERL expects a fall to the long-term average. But:

The Chair said while the Advertiser has chosen to refer to the first statement from this quote, and not the second, this is allowable in the context of advocacy advertising.

Anderson also addresses the presence of children in the ad, and observes that premises would be strictly R20:

The Chair said that if cannabis is available for purchase at shops children will be able to walk, scooter and bike past these shops, as shown in the advertisement, and this is not misleading.

There is at least a significant discussion to be had about whether these licensed outlets would actually even look like shops "as shown in the advertisement", given that shopfronts would be effectively banned.

Anderson responds to complaints that the ad was "scaremongering, sensationalist and exaggerated", by writing that:

... while the advertisement did have shock value, which is likely to have been deliberate, it did not reach the threshold to cause serious or widespread offence or cause fear without justification. The Advertiser is using provocative imagery to draw attention to the debate about an important social issue.

Is the advertiser really "drawing attention to the debate", or simply misrepresenting what's being debated? It seems notable that Anderson hasn't included even a cautionary word for referendum advertisers to be mindful of the facts. It's all just fine.

If the complaints board, with its representatives from the public and from the advertising industry, had been given the opportunity to discuss the complaints and declined to uphold them, that would have been something. Complainants and commentators would have grumbled and perhaps opted to take the decision to the review board. But there was no discussion permitted.

It's proper and a matter of practicality that the Chair should have the power to weed out complaints in this way – otherwise the board would be bogged down in trivia.

But this isn't trivia. Misinformation about cannabis reform is clearly as much part of the debate as the bill itself. Last November, Justice minister Andrew Little expressed concern about a likely barrage of misinformation about the referendum, appealed to the public to call it out and specifically underlined the role of the Advertising Standards Authority. The complaints board chair's decision that the board should not even discuss it seems extraordinary, the more so when you look at many of the complaints to board has been allowed to discuss.

In a way, this does speak to the different purposes and philosophies of the the "Yes" and "No" campaigns. The "Yes" people – and I am one – are generally, sometimes painfully, focused on making a good-faith evidential case for reform. Say Nope to Dope/SAM-NZ's role is to raise fear, uncertainty and doubt about that reform.

This isn't necessarily the end of the road – the ASA has a separately-constituted appeals board – but having been dismissed in this way, the complainants may simply lose faith in the authority. The advertisers in this case will doubtless be considerably emboldened.