It’s been a wee while, and by way of apology I will be giving away some frankly excellent kiwi music t-shirts below, so keep reading. Actually it’s not by way of apology at all, I’ve been meaning to give these t-shirts away for a few weeks, and the only reason is that I care about youse fullas, and like to thank you for putting up with me. As the kids say, :)

What with the day job in politics telly, and my spot as the new drinking columnist for Metro – a refreshingly wide brief, where I’m (thankfully) not expected for the most part to review bars – I have been more occupied than many in considering the government’s new proposed drinking laws. I’ve made my thoughts on the maximum 4am closing time proposal here before, and in a slightly more considered way in the latest Metro (the one with the mayors in drag on the cover).

It might seem like an odd battle to fight, but with a history of managing some of our later late night establishments, and having also set up NZ's first DJ management agency, it’s an issue I care about. And while I no longer manage clubs or DJs, and very seldom find myself indulging in either, I’d like to think those still young enough to enjoy it will have the option. What Justice Minister Simon Power saw that morning on his way to TVNZ to make him hold the view he does – the drunken dregs outside Dispensary Bar, presumably – is not representative of what happens at 5am. But it’s an easy hit for Power in what we now see is a fairly watered-down attempt to solve our nation’s drinking issue.

And now both Banks and Brown are in line with Power too. Somewhere along the line John Banks went from wanting us to live in an "international city" (his words), to not. Shame. I'll be at the Metro Mayoral Super Quiz on Sunday (Sale St, if you're around) and hope to raise it with the candidates then. Although it's probably not a great week to talk to Mr Banks about the merits of liberal drinking laws.

I had the privilege to interview Professor David Nutt a couple of weeks ago for Public Address Radio. If his name rings a bell it's because he’s the former advisor to the UK’s former Labour government, an internationally renowned expert who was chucked for daring to suggest they base drug policy on the actual harm caused to people, and therefore consider alcohol and tobacco to be more dangerous than drugs like marijuana and ecstasy. Heresy. His thinking is not surprisingly in line with other experts, including Wellington-based Australasian expert Dr Paul Quigley (who I’ve also interviewed on this), who had a lot of input into the Law Commission’s reports into alcohol and drugs (the final version of which is yet to be released but has already been dismissed by the government).

Ironically, this week’s news that the tobacco excise tax increase has been remarkably effective in reducing demand, exceeding all expectations in fact, will only put more pressure on the government to do the same with alchohol. The experts say that just like tobacco, price is the most effective instrument of changing behaviour when it comes to alcohol. The government argues that unlike tobacco, which effectively kills people when taken as directed, many people enjoy alcohol responsibly so why should they be penalised.

Well, the answer is, we live in a society. And if we accept that we as a society have an issue with alcohol, which most people do, then we should look at effective solutions. The government has no problem lumping everyone aged between 18 and 20 into the same basket and penalising them all equally. Just as they’ve no issue saying that everyone in a bar after 4am is causing harm to themselves and others. If harm reduction is the goal, and price is the most effective instrument of reducing harm to those who need it most, then why shouldn’t everyone suck it up? Not particularly libertarian of me, sure, but we’re working within a framework which is a helluva long way from being laissez faire, let’s not pretend that an increase on the existing tax is the only thing between us and some sort of Randian paradise.

On a more positive note, spring. F**k yeah. Scallop season opened yesterday, I’ll definitely be past my privates in the still freezing waters of the Manukau harbour this weekend looking for a feed. Wish me luck.

Muy amigo Dave Gibson of closet.co.nz has kindly offered a few t-shirts to give away. As the bFM slogan goes, you Lucky Little Buggers. The t-shirts come from a new range available from closet.co.nz, a range called Wordsby. Because they’re "words by" New Zealand songwriters, given new life in t-shirt form by a range of designers. Names like Kelvin Soh and Simon Chesterman, leaders in their field, and the likes of Dick Frizzell, an up-and-comer but definitely one to watch. Styley t-shirts they are too, high quality, and yes, everyone including the songwriters gets paid. 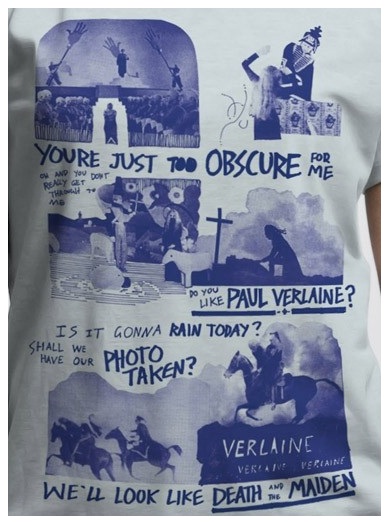 If you’d like to participate, feel free to do so in the discussion below, or send me mail directly through the feedback button (or email me at my firstname.lastname at gmail dot com – just make sure you spell damiAn properly). I want your favourite New Zealand song lyrics, and which artist or designer you’d like to re-interpret them. Or, if you’re really keen (and want a better chance of winning), have a crack yourself on the photoshopz – email me the images and I’ll post them next week. Choice.

(Since you're asking, my favourite NZ lyrics? - Shihad, "it's been a day of tiny triumphs..." which always makes me think of matchbox cars (as I've said here before... and Voom's heartbreaking, "When you went to Australia... I promised I would come over..." from the song Beth.)