When two bloggers meet, a cone of silence descends in order to facilitate the mutually assured non-destruction-of-privacy pact. Also so that we can hear each other over the children.

Busytown was subject to a warm Southerly front on a recent weekend. And although it was wildly convivial and very productive, we totally neglected to record it for podcasterity. Our bad. You’ll have to rely on David’s memory, since I don’t have one these days.

I am at liberty to tell you that someone finally did tie Dr Haywood to a chair and got a book out of him. It wasn’t me, and it wasn’t the fetching and brilliant Jen, whose job is merely to beat him with a stick until he posts something to the blog.

No, he cunningly auto-bondaged himself to the deskchair-printing-press-o-matic. It looks a bit like this: 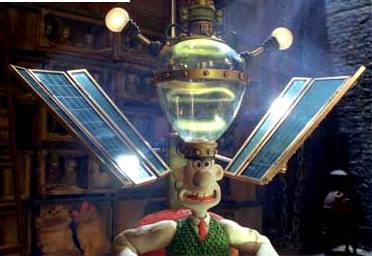 And the results - I’ve had a preview -- are seriously exquisite. A collection of essays you will be proud to own, and to purchase for your friends and relations.

I was persuaded to take an experimental spin in the same chair, and all I can say is, “Do it to Julia!” Sorry, make that, “Thank you, David,” and “Watch this space, readers.”

But I know what you’re really looking for here. Dirt on the kid. I’m sorry; professional courtesy (the same moral code that prevents sharks from attacking lawyers) forbids me from pimping out Bob. That is David’s paternal prerogative. But I can tell you that Bob’s reputation for badness? Has been greatly exaggerated.

As my older son asked, after the visitors had departed, “Did they put a spell on him before they arrived or something?”

Not that it was a contest, but I'm proud to say my younger kid totally kicked Bob’s nappy-padded arse in the badness stakes. Here is the vanquished one, shortly before being stretchered onto the troop train back to Manhattan: 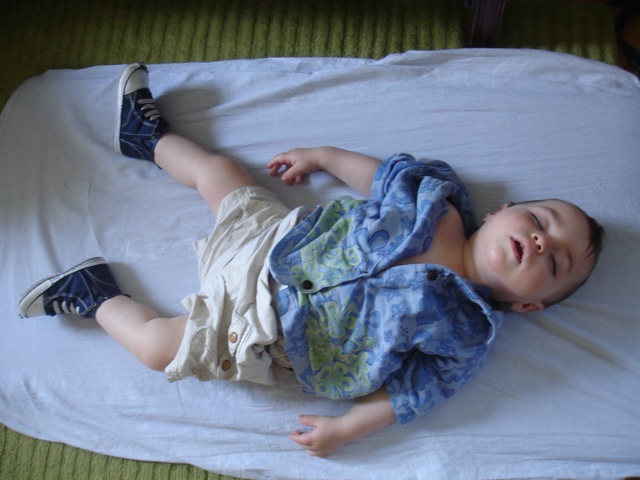 It wasn’t a fair fight. In a rainy day cage-match between bad baby and bad toddler, put your money on the welterweight with a toy in each fist, every time. Bring it, one year olds! If you think you're hard enough! 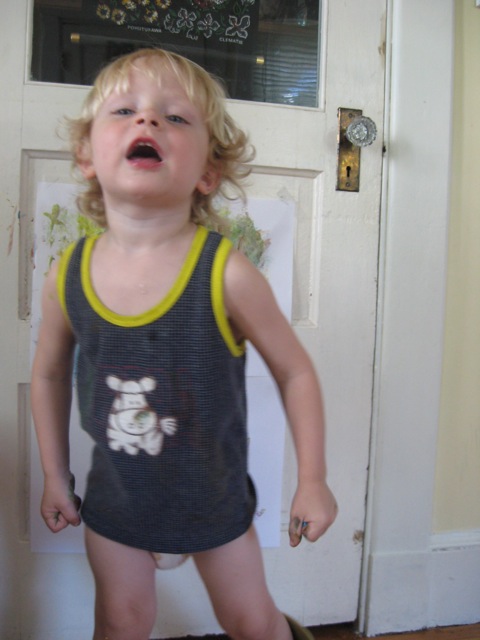 Plus, I have to say, Bob’s trash-talking was pathetic to the point of non-existent, whereas the T-Boy is still holding forth on Bob’s inability to either float like a butterfly or sting like a bee. More than a week after repelling the infant invasion, he will occasionally wake up in the morning, stretch, and suddenly bellow “I wike Bob the Builder. BUT I NO WIKE BOB THE BABY.”

Did I mention he is two and a half? As far as I can make out, despising people who are smaller and more winsome than you is a necessary developmental stage (it continues through high school; I’m still growing out of it), and it is very hard work. Also hard work is fighting your corner against people who are bigger and more articulate than you; not just parents, but your toweringly huge big brother.

It is true that this time last year, big brother was going through a “gnnnngggggh!” stage of knuckle-biting frustration with the knee-high lego-wrecker. Especially just after we took down the gate that had previously fenced off the lego corner. (Not for glasnost reasons, but because it had already been half-demolished by a persistent little East Berliner clambering on it to peer over at the material delights of the West).

There were even fisticuffs, inasmuch as you can have fisticuffs with somebody a quarter your size.

But these days, the increasingly amiable big lad is much more patient with the little guy’s foibles. He delights in lending him cultural capital -- have you ever heard a two year old performing the Doctor Who theme, or wheeling around the house screeching “Ek-ter-min-AAAATE!”? It's bloody scary and incredibly cute. Big brother is also intrigued by the whole business of positive psychology, which feeds into his own sense of bigboyosity. Need a distraction or incentive when your Lego is under threat from insurgents? It's no problem, when you can operate the DVD player, reach the food cupboard, and operate the ice cream scoop.

You would think this was a strategic relationship to be cultivated by the junior partner. But no, the little guy is still fighting the last war. When he’s not waking up cussing out Bob the blameless baby, he likes to greet the day with a shout of “BRUBBA GO BACK TO YOU BED!”

Since this wero is delivered right into the ear of the parents whose bed he himself has also invaded in the night, it lacks the ring of authority. It is also not a nice way to wake up, for any of us.

(Yes, we solved the co-sleeping problem. We got a bigger bed).

I don’t want to paint an unbalanced portrait of my younger son. He is the butterfly to his older brother’s diving bell, a natural upper, the sort of person for whom the word “impish” was coined. He delivers delicate kisses and random snacks to family members at will, sits gently on the cat to read his books, and assures me daily that he wuvs me, a WOT. When not channeling the Great Dictator, he is chipper and charming and funny - Cary Grant in size 4 ladybird gumboots.

And although I miss his Gerald McBoing-Boing/ Marcel Marceau days of communicating entirely via pantomime and sound effects, I do love that he can now tell us what he wikes and what he doesn’t wike. I just wish he’d put down the bullhorn.

A month or so ago, big brother got an impressive summer haircut at the barber's, his shortest ever. As you can see, he was transformed from Beatle... 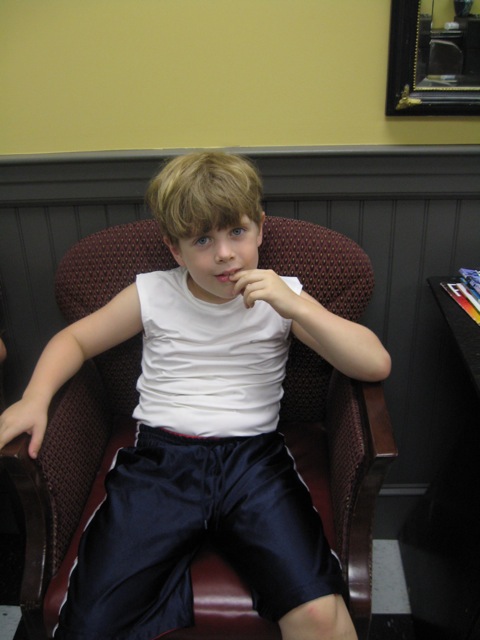 to Baseball Hall of Famer: 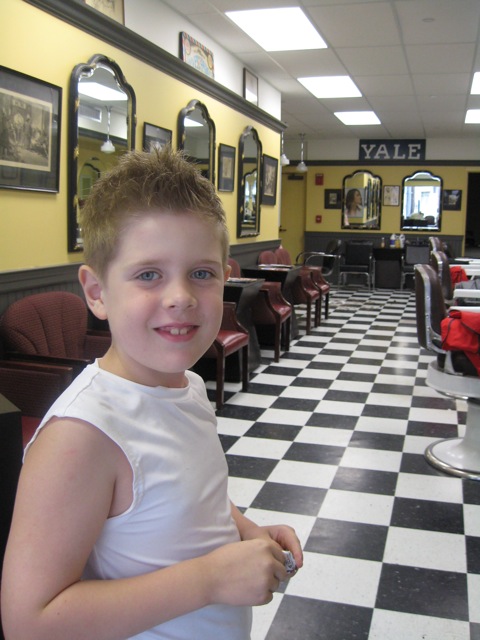 Immediately, the younger son asked me to chop off his own baby-fine golden curls so he could “look like Brubba.” Yes, these shagadelic curls right here: 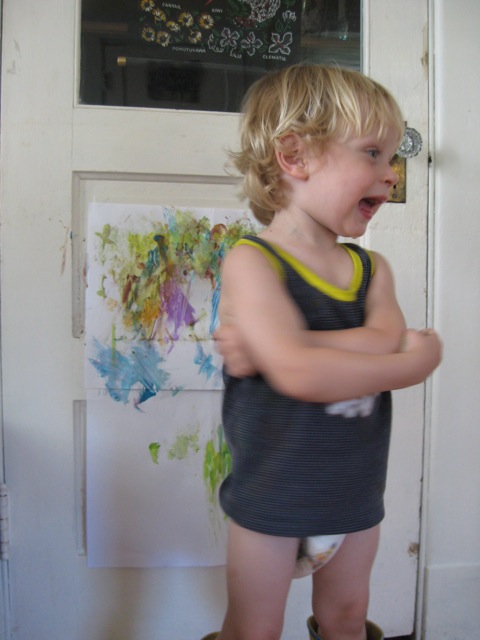 I took a deep breath, sobbed quietly into my sleeve, then picked up the scissors and gave him the sweetest of Eton crops. The cutting process was surprisingly painless for both of us. 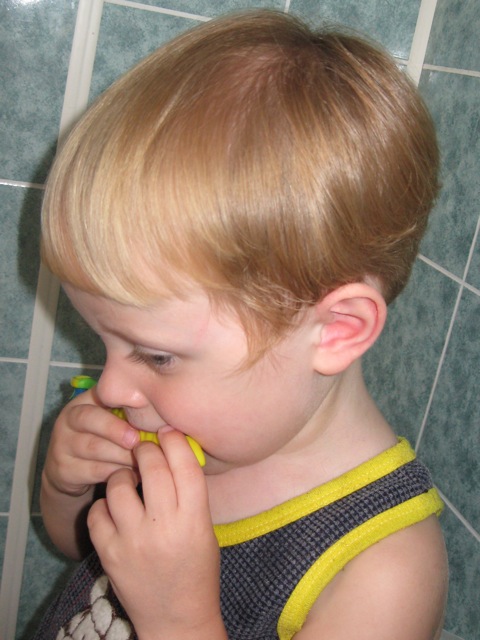 But holding him up to the mirror afterwards turned out to be a monumentally dumb idea for two reasons, one of which was that, not having double-jointed elbows, I had no way to block my ears.

“NOOOOOOO!!!! That NOT good. Want it SPIKY like Brubba! You a BAD MUMMY. Raaaarrrrrrrrgh!” und so weiter.

It is not easy to turn wisps into spikes. Luckily, before I was a bad mummy, I was a bad-arse 80s teen. Back-combing and hairspray saved the day, finally winning me that sought-after “I WIKE IT!”

Man, I wish I were brave enough to try that on with my hairdresser. 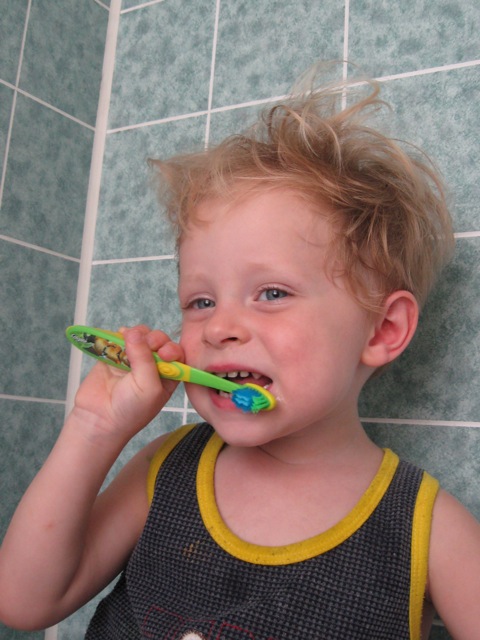