So when I first heard about the plan to re-open Cashel Mall by November, in time for Show Week, I have to admit I wasn't all that impressed. It seemed like a perfect demonstration of some pretty fucked-up Canterbury priorities. I might have said some pretty scornful things. Several times.

As time has gone on, though, I've come to appreciate more and more that anything that makes some people feel better here, that lifts their spirits, is worth doing. I might loathe Show Week, and the idea that the height of glamour is puking in your fascinator while wearing heels on grass, but some people love it. It's an institution, and a way of feeling, no matter how shallowly, that something is getting back to normal.

So yesterday, my partner and I went to the Container Mall. We wanted to wait until the politicians pissed off and the crowds died down a bit, and see what it was actually like.

And let me say, in case it isn't obvious, this isn't about consumerism. It's not about getting back to a life where you can buy a jar of marmalade with Paddington on it, or a $130 garlic crusher. (I'm assuming it crushes garlic into diamonds, Ballantynes.) This is about feeling like we've got a piece of our city back – one of those pieces we always thought were public space, and which the public hasn't been allowed near for eight months.

Also, for some of us, I think it's about proving something. We've been told so many times that people won't want to go back into the central city, that it's too frightening. People are too scared to walk in the shadows of those buildings, to be where people died. And no doubt some people are, but a lot of us are not. We want back in. That's clear from the crowds at the mall, and the overwhelming (but surely entirely expected) response to the CBD bus tours. We want our city back. We want, quite literally, to occupy Christchurch.

The thing about the container mall is that it's quite nice. They've taken the time to make gardens, put up sculptures, and possibly loot the CBD for every intact bench and planter. It's a place you can be, and sit, and talk – and have a coffee and a muffin if you're prepared to queue for half an hour.

And that's what people were doing: talking. I didn't see a lot of buying going on, but every server behind every counter was talking to someone. Through the constant sound of construction and deconstruction was the washing tide of conversation. My previous ventures to the edges of the Red Zone had been marked by an eerie desolate silence. The container mall was a tiny oasis of life.

At the eastern edge, where the mall hits Colombo Street, is a broad wooden bench around a garden. Here, people weren't sitting and talking. They were taking unspoken polite turns to stand, and stare over the fence, past the boundaries of civilisation. We want to see: to know, yes, but also to reclaim, and to bear witness. It was important to me, in a way I can't really articulate, to take my turn standing on that bench, and take this photo: 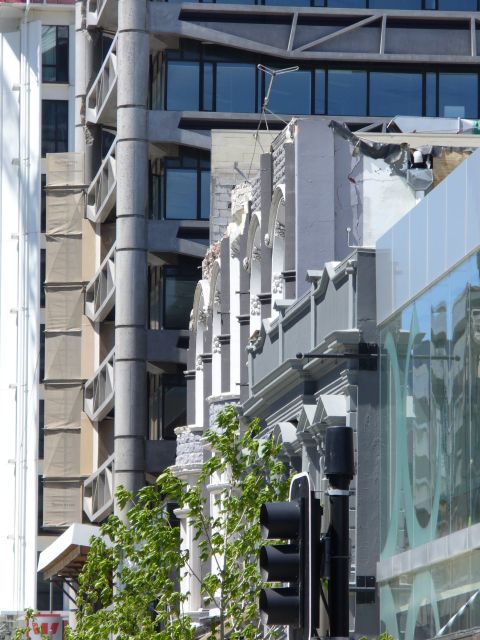 Those stone arches, that crumpled gray facade, the building with the holes in the side: that's my children's school. My expectation is that my oldest child, at least, will never go back there.

After we left, shopping-less and muffin-less, our wanderings found us up against a chain-link fence, peering in mournful longing at the Dux de Lux. Cordoned off it might be, but someone is mowing the lawns and tidying the gardens. The cheesemaker is open right next door. Then we went home, where our suburb is increasingly turning into a construction site, driveways being torn up and relaid, houses being re-pointed and re-painted.

And I'd like to tell you that my spirits are lifted, that I can feel hope and belonging again, a sense that Coping may not have to last for the foreseeable forever. What I have is a sense that I should feel that way, and a hope that other people living here do. In July, I said I was worse than I had been in May. I'm worse now than I was then. Not, I think, because anything has got worse in any way, but because I'm not better. Not being better feels worse, if that makes any sense.

Amongst the bleakness, we still laugh. A friend of my partner's, on finally getting access to their offices, made the mistake of opening the fridge. What happens to milk left in a turned-off fridge for eight months is far too much for the structural integrity of the bottle. On hearing that her partner's office block had been condemned, a friend said, "Well, I guess he's never getting his lunch back out of the sandwich press."

Yesterday, we saw people determinedly sitting on the banks of the Avon, having lunch just the way they used to, surrounded by seagulls and ducks and sparrows begging for food. It's just a matter of time before Karl's lunch slopes out to join them.