Because I really, really strongly believe that informed debate involves giving people access to the data and explaining your working, I have done two versions of this post. This Public Address version is the easy-to-read one that draws a cloak over the technical steps. The Github version shows the exact computer code used.

Declaring my sources for this right at the outset, the data file used is compiled from the Reserve Bank of New Zealand. The Housing Value (in billions) is available in time units of quarters in the RBNZ housing data. I have converted the billions to millions to make the units consistent with debt. The Household Debt (in millions) comes from the Reserve Bank series C6. As C6 is in time units of months I have converted it to quarters by taking the average debt of the months in the quarter, as this is what the Reserve Bank does in the shorter time series C6a. that is my raw data. I have also added the CPI for normalising the data against from Stats NZ - Infoshare Group: Consumers Price Index - CPI, Table: CPI All Groups for New Zealand (Qrtly-Mar/Jun/Sep/Dec). Arguably the Capital Goods might be better, but it really doesn't change the final results and from a people perspective you need to buy food etc. So that is the data. 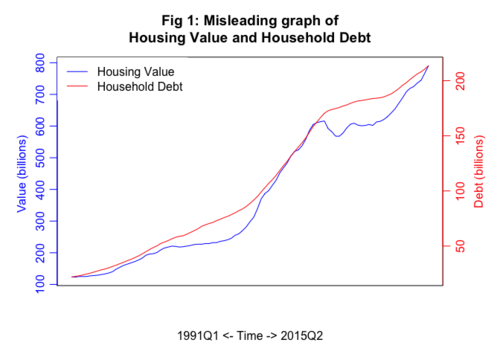 People make a graph like this showing the relationship between Debt (red) and Price (blue). Which I have done in Figure 1. People go run linear relationship models on that and conclude it fits wonderfully.

There are a few things wrong with this graph (the stretchy axes are a bit of a problem), but the main thing is that it has not taken into account the "stuff increasing over time" issue – that both Housing Value and Household Debt are governed by "the amount of money" factors like inflation. There is an entire website of spurious correlations of this type.

Now, because we are not blind monkeys mooshing keyboards, but instead have some understanding of the "stuff increasing over time" issue, we will take the difference between quarters.

This is a very standard approach to things that happen over time, and we have evenly spaced time periods so it all works nicely. From each quarter you subtract the value for the previous one, so that you are left with how much things change by. This lets you compare the amount that things change together, and doesn't have any "over time" issues as they are all the same short block. Making the similar graph similar to the previous one, but this time using the Quarter on Quarter information and locking down the vertical axis we get Figure 2. 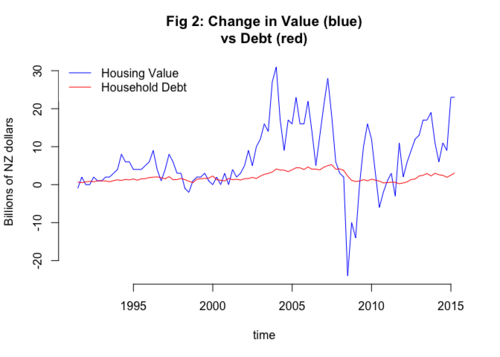 We can do a linear regression of these two things, which suggests people getting mortgages are weakly matching money being paid for houses. But even that a bit rubbish because it doesn't take into account the possibility that things have changed over time, and not being a blind monkey it is pretty clear that scale of movements in recent times is much more than earlier times (other sources suggest the pre-2001 pattern held going back through time).

I would also suggest that the upward trajectory since 2008 is not reflected by movements in debt. And further suggest that, as is the case in other countries, if people were buying houses in the traditional model the ratio of increase in value to increase in debt should be relatively constant.

At this point I have satisfied myself "something is up". To get a sense of the overall magnitude in a slightly speculative way, let's look at the cumulative differences.

First, by converting the lot to 2015 dollars based on the CPI. If, hypothetically, the early figures represent an internal economy with the traditional pattern sales are paid for by equity plus borrowing, and that the 90s is representative of that ratio, we can do a linear regression to get that relationship.

Calculating it with a zero intercept, because if there was no money people would not be buying houses, we get an estimate of 2.1915 added house value to added household debt. This gives us around an average 46% equity in the purchase of a house, which in the spectrum of new buyers to older people downsizing seems a credible average. This 2.1915 multiple gives us the expected component of added values which are paid for by people getting mortgages. So what does that mean cumulatively? Well, Figure 3 is what it means. 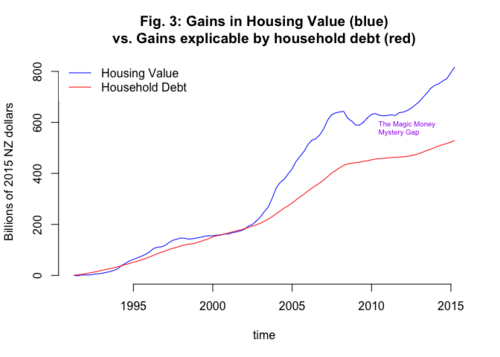 Keeping in mind that in the early 90s household debt matched house value, and it still does in other countries that are not open to buying from the world, the height of the blue line above the red line is the gain in value (in billions) that cannot be explained by household debt (and does not seem to be coming from any other sector of the economy). I realise I am now back to "stuff increasing over time", which means it is a problem comparing things of different periods, but the CPI was the best correction we have for that.

Because it can be difficult to read heights in a stacked graph, I have separated out the magic money section by itself in Figure 4. 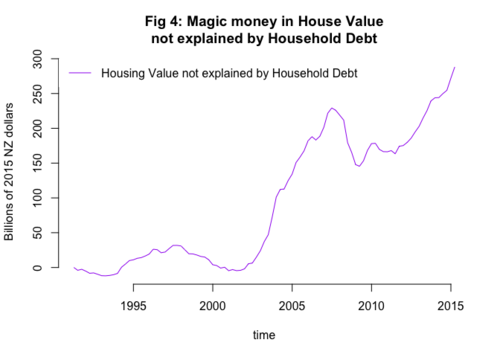 Is all the magic money offshore capital? We just don't know. There is a lack of evidence of it coming from other parts inside the New Zealand economy, and given the hundreds of billions of dollars, a local source would be somewhat obvious. We also know that in other countries, with more internal housing markets, household debt does not just match the pattern of house value, the amounts add up to the same in gains. In New Zealand there is a 300 billion shortfall.

And only after that demand is satiated will the magic money not be competing with local people wanting to buy houses. And if it is offshore capital, then local buyers are competing with anyone in the world for whom buying a house in New Zealand is a superior choice to buying local property.

House Sales are not the same thing as Housing Value. True. But based on REINZ data I have seen the value in sales tracks to the same pattern as the total Housing Value which is extracted from Sales, and it is the lack of pattern in Value compared to Debt that is the give-away. Also, in other countries growth in debt does actually match growth in value, so if you are asserting in New Zealand it should not, you should produce some actual evidence for why that would be the case. Even if it isn't actual sales, it is a measure of influence over the market, so for the magic money to be there a house must have been bought. 300 billion of the 800 billion in the past decade is quite an influence.

This doesn't prove it is overseas capital. True. But it isn't coming from mortgages, and given the sheer size of the values, that amount of money being diverted from elsewhere in the economy would show up on something. It has not shown up anywhere I have seen, and I have tested a lot. Once again, if you are asserting that you should bring some actual evidence to the table.

Authority X said it was supply constriction due to RMA restriction. I am sure they did. However, the initial launch point (third quarter 2001) precedes the RMA (and subtaintially precedes the time spent implementing it). But we come back to this: if around $300 billion in the $800 billion in Housing Value gains is not explainable by inside-the-economy debt (it has nothing to do with people, actual immigration is not a very good predictor of house prices) – how many houses do you need to build to satisfy that unknown demand?