One of the frustrations of local body cycling networks is that they tend to ignore some of the key ways people actually ride. Official cycle maps have tended to show official cycleways that are part of the transport network, but not rights-of-way and paths through parks. That's why riders make and share crowdsourced cycle maps.

Happily, the launch of Auckland Transport's consultation exercise for its planned Point Chevalier to city cycle improvements suggests that has changed. Of a fairly dense prospective network of paths through the Western Bays area, the first project is one that connects three parks and a right of way, from Williamson Ave through Grey Lynn Park to Cox's Bay Park. It's basically already my go-to way home from K Road through the foodie zone and it's in red on this map. 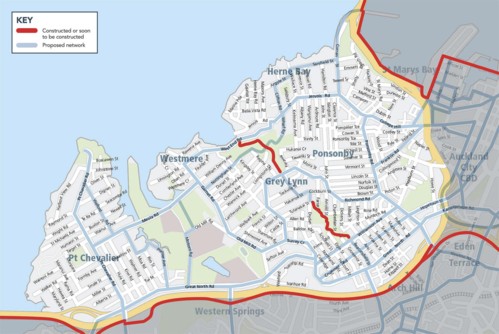 "It’s been a longstanding desire of the Waitemata local board to get that link recognised and upgraded," Kathryn King, AT’s Cycling and Walking manager, told me. "It connects a number of parks and is a really nice route for people travelling to the shops or parks or cafes along it. It's a well-established route for local people, it just needs needs some investment to make it more comfortable and attractive."

That path, including improvments to street crossings, will be the only one done this year, in part because AT's consultation process is so extensive. Seventeen thousand households will receive AT's brochure outlining the prospective network and be invited to provide feedback – including by drawing their own preferred paths on the map in the brochure and sending it back.

"We're asking people living within that greater Western Bays area what routes are the priority for them," said King. "And from that analysis, we'll be taking five or six projects forward to design and then coming back to consult people about the range of options we might be employing."

The philosophy of the project is to enable local journeys – to school or the supermarket, for example.

"The strategy for cycling investment in Auckland is to develop these networks in local areas, starting from the city centre and radiating out," said King.

"I think we have a lot of really long facilities that don't help to build up those local cycling communities. It's establishing cycling as an option and creating travel choice for our customers. And that travel choice is for all sorts of journeys, not just commuting."

I pointed out to King that I feared I might have shocked one of her colleagues by confessing that I generally prefer to ride up Chinaman's Hill into town than to cross the motorway to the northwestern cycleway, which terminates in the short but oh-so-irksome climb to Newton, only for the whole climb to be thrown away on the descent on the other side.

It turned out that she also lives in the Chev and does the same thing.

"I think it's actually a nicer ride."

The Newton Road Problem will be subject to consultation in the next few months, and then, hopefully sooner than later, a new path will be made through the small reserve by the bridge to connect with a cycleway on Ian McKinnon Drive making for a single, easier climb.

Chev-to-the-city is a 10-year project with both local funding and money from the government's Urban Cycleways Programme. It's also a 10-year project which currently has only three years of funding locked in, so there are no guarantees of its completion. But the first set of facilities will be completed along with the three-year deadline in June 2018.

That first set will not include the busiest route in the area, Ponsonby Road.

"Ponsonby Road needs to be addressed as a wider streetscape upgrade," said King. " That means we need to work on facilitating improved public transport and pedestrian access and retaining access for people in cars – all of that needs to be looked at at once. Like Queen Street or Broadway in Newmarket, it needs to have a bit of money thrown at it and be done properly."

As a rule, roads with high traffic speeds and volumes (Great North Road, for example) will get protected cycleways, while the focus on quieter local roads will be on making the motor vehicle traffic even quieter. I would hope AT has learned from the cyclewaysalongside Dominion Road, where traffic-calming measures created bottlenecks that seemed to make cycling more, not less, difficult.

AT has been largely talking so far to the Waitemata local board, but also also consult fuerther with the Eden-Albert board, which wants to make sure the trees it has planted on Point Chevalier Road are safeguarded. But, by chance, one of the big early projects will fall on the Eden-Albert side of the boundary (which runs along Old Mill and Garnet Roads).

It turns out that Meola Road is due for a once-in-25-years do-over, which will see the whole road dug up and replaced, along with services. You can exect to hear the roar of the the people who park their luxury SUVs the length of the road while their children are playing football on Saturday mornings.

"We are looking at different options there. It's difficult because the land is contaminated on the seaward side. That reduces the options available to us for an off-road facility. But it's a fantastic opportunity for us to add value, if possible, with improved cycling and walking connections."

We'll see what happens there. But in general, what AT is doing accords with my cycle-sense as a local rider, and I'm keen to see the additional cycle parking which will be built along each route – something I wrote about in a post about quaxing.

I think things are getting better.