In the week of the Mount Albert by-election, our household received four phone calls about voting. There were two from Labour humans checking that we were planning to vote and knew how and where (one on Saturday), one from the E Tu union, for the salaried journalist in the house, and a surprisingly engaging 58-second robocall from the Labour candidate herself.

The Labour Party clearly not only wanted wanted to win the by-election, it wanted as many voters as possible to turn out for a by-election that had been deprived of its competitive edge by National's decision not to stand a candidate. It probably also relished the chance to test-drive the Auckland electoral engine it figures is essential to any hope of a general election victory later this year.

In the end, Jacinda Ardern won by taking more than three quarters of the votes on an inevitably low turnout. Certain political commentators' fevered predictions that National voters would rush to cast tactical votes for the Green candidate, thus handing Labour a humiliating defeat on home turf, didn't pan out – because normal people don't act that way, especially not on a balmy Saturday in February.

In the end, the Green candidate, Julie Anne Genter, came a very distant second,  8511 votes behind the victor. It would be harsh to say that was because she ran a poor campaign. She was only only candidate apart from Ardern to knock on our front door and ask for votes. She rode around the electorate on a bike decorated with an election hoarding, which sent an appropriate Green message. (She wasn't the only one with a branded vehicle: Ardern had the little red caravan and The Opportunities Party's Geoff Simmons, who placed third, drove around in that alarming van.)

Perhaps this is how Auckland will play out in Auckland in September: Green voters will tick the Labour candidate while their party strategically seeks party votes. But I don't think there is quite the demarcation between local and national campaigning that some people would have you believe. Contact with a candidate is potentially a strong incentive to vote for the party. It's worth being present on the ground.

There's also the chance to shift the public's expectation of general election candidates from other parties. There has not been enough note taken of the passive campaigning of candidates who stood for John Key's National Party three years ago. Up and down the country, they eased to victory (or, least, brought home the party vote) by not turning up at public meetings and letting the Prime Minister make their case. Both Labour and the Greens could make that look as lazy as it is this time around.

What Labour really doesn't want its ally doing is encouraging people to split their votes as if that helps both parties. Labour's big problem in Auckland in 2014 was the number of people who returned well-liked Labour MPs but sent their party votes elsewhere, generally to National.

I think the way Labour sees what happened on Saturday is this: it's a solid stake in the ground and another step towards presenting a strong Auckland team bolstered by fresh talents like Michael Wood and Deborah Russell. That team, so far, has electorate organisations and the party leadership on the same page, which hasn't always been the case for Labour.

The way much of the news media sees it, on the other hand, is OMG JACINDA'S SO POPULAR SHE SHOULD REALLY BE DEPUTY LEADER AND MAYBE EVEN LEADER WOULD YOU VOTE FOR HER AS LABOUR LEADER. Because of course what Labour needs in election year is yet another leadership shakeup.

Yes, Labour needs to present a strong face in Auckland and no, neither Andrew Little or Annette King are from Auckland. But it should be (and presumably is) working on doing that by presenting a strong Auckland lineup: Ardern, Wood, Sepuloni, Russell, Twyford, Henare, Salesa, Sio and, yes, probably even Willie Jackson, who is perceived quite differently in parts of the city than he is at large. I genuinely think Auckland voters will place more value on that than on the symbolism of deputy leadership. How many ordinary people can currently name the deputy leader of any Parliamentary party?

What the Greens and Labour have in common is that a good deal of their electoral relevance in Auckland derives from their success working together in the city's local body elections. For Labour, there's a lot more mileage in making a case to Māori voters in the sight of Paula Bold-Wilson joining Will Flavell on the Henderson-Massey local board, or in Richard Hills (who identifies awith Ngāpuhi) being elected to Council in the North Shore ward, than in having Little blunder through an interview about whether the Māori Party is is "kaupapa Māori".

By the same token, I was surprised the Greens didn't bite the bullet and put up Chloe Swarbrick in Auckland Central. Auckland's emergent leadership offers quite a compelling story.

Anyway, as things stand, Labour and the Greens have made a pretty good fist of the cooperating part of their election-year alliance. I think that became clear during my chat with Ardern and Genter at Splore. They were so friendly that they carpooled out to Tapapakanga and posed for pictures together afterwards. But there were awkward moments when it came to talking about their respective electoral brands (Jacinda: just a thought, but it might be better not to refer to your allies as a "small party"). Still, they did both seem genuinely pleased when I brought up the by-election phenomenon of households like the one pictured below. There are worse ways to be seen in an election year. 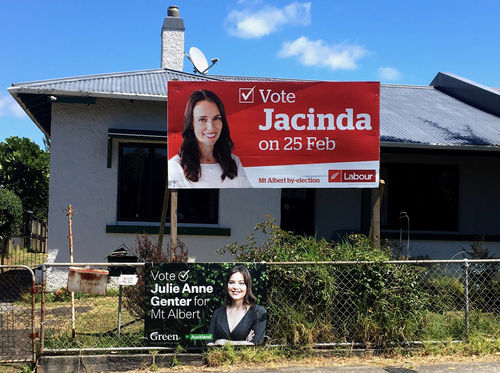