The only story on the local cultural front today is the death of Margaret Mahy yesterday, at 76 .  I don't think I'm the only reader who was shocked, but shouldn't have been, that this intensely private woman (despite her vivid public persona) was diagnosed with cancer in April.

Others can write with more authority about a career that ranged from children's picture books and poetry, through "Young Adult" novels every bit as fine as "real literature" (gag!) through to a singular (and under-rated at the time) foray into science fiction-ish television writing that makes me wish she'd done more.  Marketing catergories, genre and arbitrary age distinctions were treated by Mahy with all due disrespect.

It's certainly not my place to talk about the private woman I never knew.  But even the most cursory reading of Tessa Duder's Margaret Mahy: A Writer's Life (HarperCollins, pbk. $40.99) is a sobering experience.  It's almost as if the life Mahy wanted, even was compelled to live -- as a writer and a woman -- never had a easy option.  In the often petty, bitchy and feud-raddled literary scene, Mahy's grace and genuine niceness stood out as much as her work.  If anyone ever had a mean word to say about her, they sure seemed to keep it to themselves.

Margaret Mahy knew that writing -- and her advocacy for libraries, literacy and the word -- had a vivid element of performance art.  I doubt I was the only child beguiled into delightedly sitting still by this storytelling witch in the candy-coloured afro clown wig.  But her magic was something deeper and more profound.  It was about respect.  Respect for language and story, expressed though an extraordinary level of craft regardless of whether the target audience was five, fifteen or fifty.  Respect for the rich tradition of literature we brought from far away and eons past, and making something new from it right here in Aotearoa that could go back out into the world without apology or special pleading. Respect for the knotty, exquisitely human truth that joy and sorrow, delight and loss, are inextricably linked and the young can handle it.  They need to.

Most of all, it was respect for the reality that parents, critics and academics all too often forget.  Children know when they're being talked (or written) down to.  Growing up is full of wonderful things -- sex, booze, money, car keys, staying up late -- but that doesn't include the idea that "literature" requires us to put up with the pretentious, the shoddy and the dull because it's really good for us.  Mahy knew that the young not only deserve better, but they demand it.

Her real legacy is that she never stopped delivering.

It's time for me to stop talking, and you to start.  The comments are open for you to share your thoughts and memories about this woman, her career and legacy but most of all her work.  Weeping is OK, making merry is compulsory, but please don't get drunk and trip over the coffee table.  M'kay?

It was Bernard Shaw who said the English and Americans were divided by a common language, but there's no place in the world where something won't make you giggle like a dirty-minded infant... 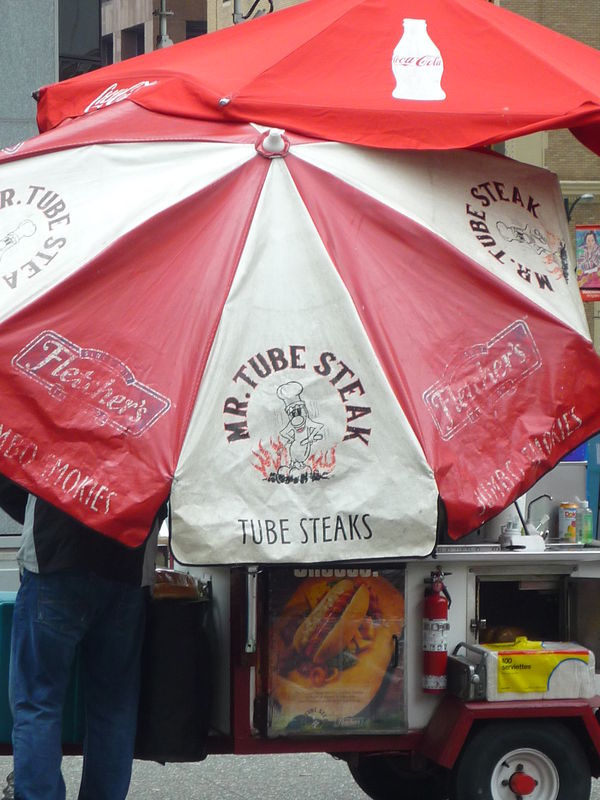 ...Though it's more unusual for a ferry ride to trigger an existential crisis. 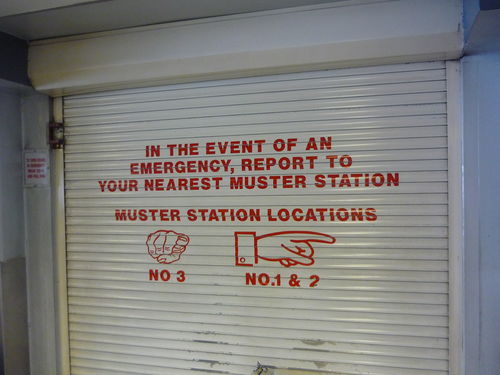 Public art is kind of depressing... 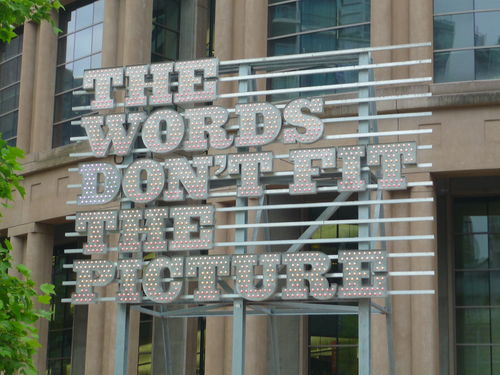 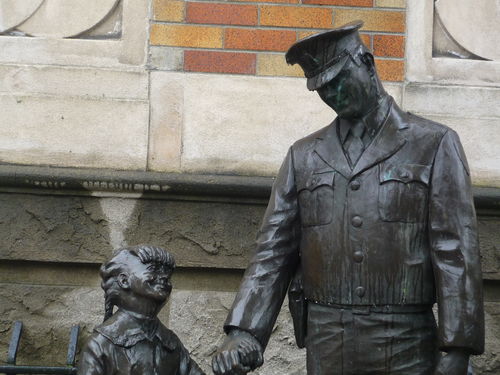 ... or simply worng in ways that defy human comprehension. 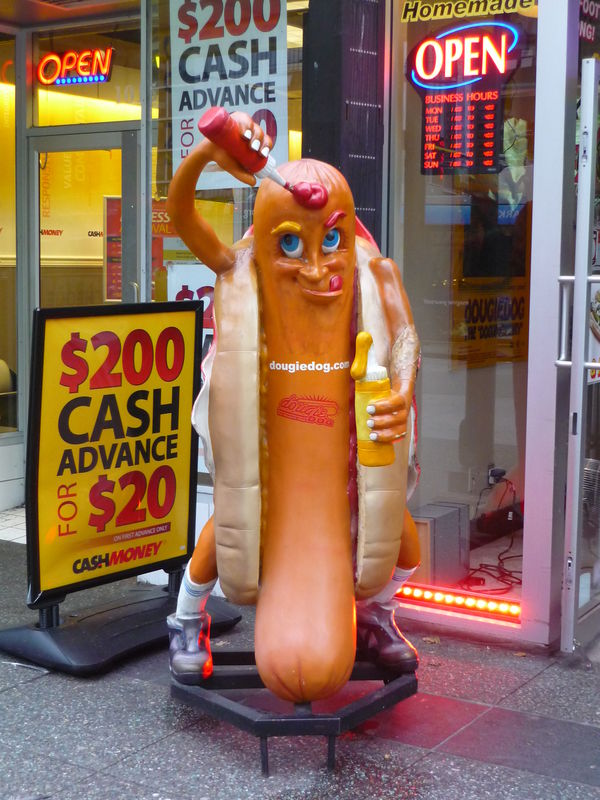 If that does anything for your appetite, please get off my virtual lawn. Now.

Still, Vancouver may be kind of grey and wet, but how could not not love a city that embraces Ryan Adams and Michael Buble by putting plaques in the middle of streets instead of brands on their foreheads? 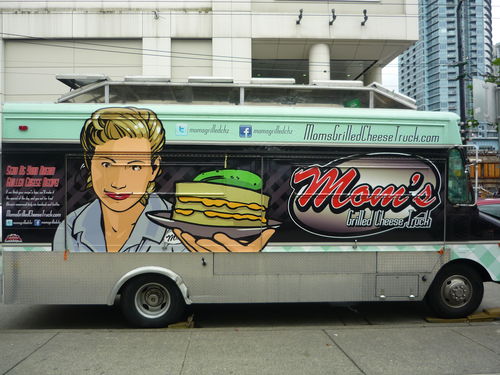 And you what know what happiness is?  After a morning absorbing Matisse and indigenous hip-hop contemporary art practice at the excellent Vancouver Art Gallery  step outside and let beautiful and charming Canadian women in a truck will sell you three types of grilled cheese in one glorious toastie pie of death.

The smell of burnt caramel nuts drift by

As gaggles of giggling chavs seek their destiny:

The beauty of the twilit evening; here

A perplexed gentleman from Mumbai tries

To take a photo; there, a baby's cry;

A tour party isn’t sure where is here.

The last rays of the sun beautifully peep

Round The Eye the South Bank lion ignores still.

The exhaust fills me with a lethargy so deep!

You stop and start and shamble still:

Dear God! will I ever get some sleep;

Unlikely. The bus has just been cancelled.

I’m sure there’s not many things more fair:

The smell of burnt caramel nuts drift by

As gaggles of giggling chavs seek their destiny:

The beauty of the twilit evening; there

A perplexed gentleman from Mumbai tries

To take a photo while the babies cry;

A tour party aren’t sure where is here.

The last rays of the most beautifully peep

Round The Eye the South Bank lion ignores still.

The exhaust fills me with a lethargy so deep!

You stop and start and shamble still:

Dear God! will I ever get some sleep;

Unlikely. The sodding bus has just been cancelled.

I've always found it impossible to walk past a bookstore, even if there's nothing in it I can read apart from the imported pornography (don't ask unless you have serious cash-money in hand).

But anyone who cares to explain this, seen eariler today in a bookshop in Cologne, will have my eternal gratitude. (There is a law of tourism that you can only do two museums and one department store, or three cathedrals and six department stores in a single day without mental gridlock.) Perhaps. 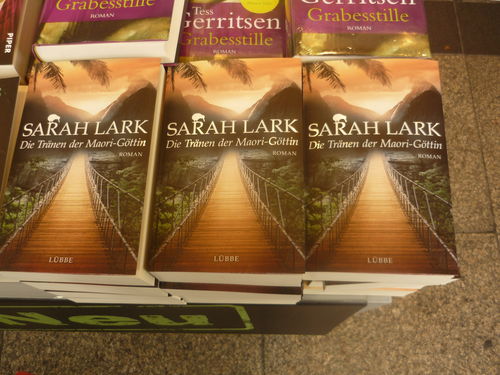 Yes, I should be feeling a patriotic glow of some description but the woman giggling softly beside me over another of Frau Lark's roman, Im Schatten des Kauribaums (I shit you not), one is not optimistic.

Could any of our German readers enlighten us -- is it hot throbbing Mandingo down under action, or a sensitive work of historical ethnography with a plea for tolerance and understanding on the side?  Failing all else, and Public Address being what it is, the most imaginative and/or disgusting confection will get you a vaguely smutty postcard from Amsterdam (where we're off to around 8pm tonight, New Zealand time).

And if you don't I will post ever damn photo of every church I've been in between here and Hong Kong.  Your life is not that long.

I'm not a huge fan of hip-hop and am ever so slightly prone to panic attacks in large crowds, so it shouldn't be a surprise KRS-One's Auckland show last night wasn't terribly high on my bucket list.

But this, if this is true, should have even the most fervid rap-haters tapping their feet -- with impatience and irritation.

Rapper KRS-ONE has been forced to move his concert from Auckland’s Cloud venue at the Viaduct, allegedly after concerns over the mix of rap and alcohol.

A liquor licence for the venue was denied, forcing the concert to move to Studio on Karangahape Road.

The Auckland City Council claims promoters were too slow in their application for a liquor licence at the venue - a claim KRS-ONE concert promoter Zen Ginnen calls “completely a lie”.

Mr Ginnen claims there is another reason behind the venue shift. He says he was told by police that rap tends to attract a “certain group within society which causes problems for the community”.

Perhaps I'm being way too cynical, but if Ginnen's allegation is correct it's hard to escape the conclusion that "certain group" is not at all subtle code for young, male, from Auckland's south and west and bearing way too much melanin. (Even with my level of hip-hop illiteracy I have my suspicions that the audience for this chap might just skew a little older and a lot whiter.)

Anyone who's attending KRS-One's hastily organised seminar at Auckland Museum this afternoon (1pm, The Auditorium (level 2), enter via Southern Atrium.  Admission by koha) is welcome to report back in the comments.

I just hope the New Zealand Symphony Orchestra isn't planning to mark next year's centennary of the premiere of Stravinsky's Le sacre du printemps (The Rite of Spring) with performances in venues requiring a liquor license.  Well-bred bourgeois subscribers quaffing mediocre over-priced  chardonnay in the lobby of the Aotea Center year may sound harmless, but Iggy infamously attracted his own kind of problematic "certain group" to that gig (even if the actual rioting seems to have been ever so slightly exaggerated).

It may be a landmark of modern classical music, but we just can't risk another drunken riot.  Arty-farties and liquor don't mix.

Plus ça change, plus c'est la même chose?  Or just another reason why white people can't have nice things?