It was, it must be said, a bloody big bang. The All Blacks finished the haka ('Kapa o Pango' again) and a second later, BOOM, sheets of flame and a shockwave. Unexpected explosions thrill us because our bodies respond as if it's a threat and our brains turn up half a second later to tell us it's all good fun. Which it was.

Except it quite clearly wasn't fun for the three people in Eden Park's West Stand who were injured by stray pyrotechnics. It seems that some waste also made its way on to the playing surface, possibly presenting a risk to the players.

The use of pyrotechnics at big matches is far from new, but that one did seem out of the ordinary. Additionally, there were so many fireworks on a still night that the smoke just stayed in the stadium for a good 10 minutes into the match. I got a little video of the All Blacks running on to the sound of Shapeshifter -- and remember, this was before the big bang.

I was sitting with my buddy Richard in the "restricted view" seats I'd grabbed at the last moment. It turned out that Row D really was quite restricted: 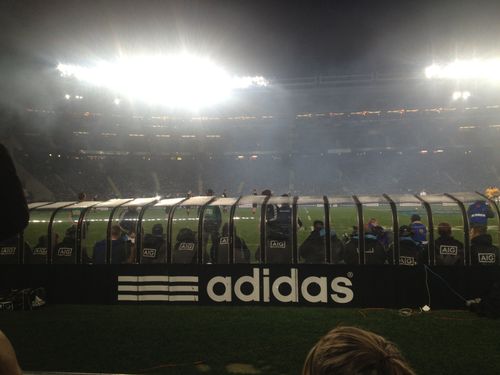 But it was okay once we adjusted and got used to looking up at the screens where necessary. And really, it was great to be in the stadium for one of the All Blacks' top-drawer performances. The outside backs' tactical kicking was quite a revelation -- they'd clearly worked out that the Wallabies were vulnerable down the tramlines.

Man of the Match? Brodie Retallick. Without naming names, there have been All Black locks who haven't seen their job as much more than catching lineout balls and pushing in the scrums, but Retallick contributes furiously in almost every area of the game. He's almost redefining the role.

To get to and from our seats, we had to pass the media room. Time was, just getting some copy in for the Sunday paper was what the job was about, but we live in a real-time world now. These guys were sweating over their laptops during the half-time break. 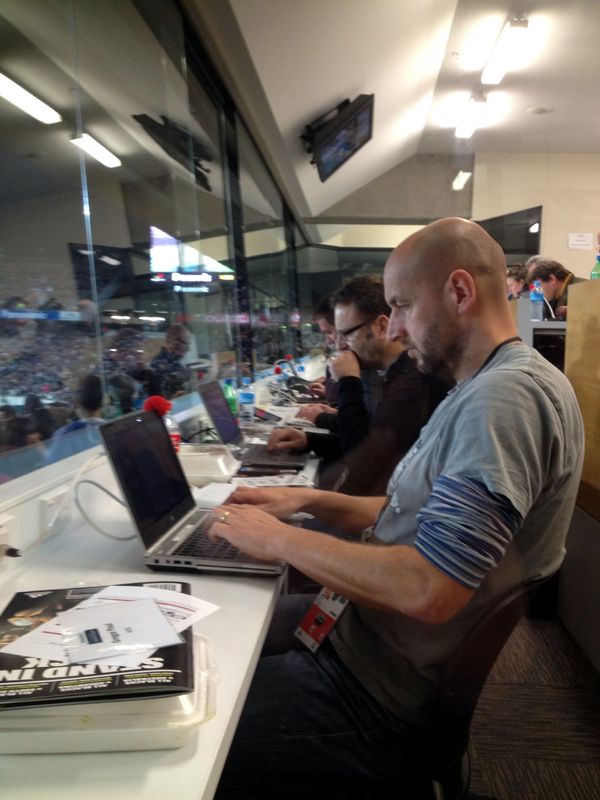 But not everything of note happened inside the ground. As Richard and I were walking up Bond Street to the ground, one member of the group of young rugby fans in front of us yelled "Fuck John Key!" and someone behind us immediately responded "Fuck Cameron Slater!"

The liberal left might not want to hug the young man too closely: he shouted his piece just after he chucked a plastic bottle into the park. So let's say his position was more anti-authority than party political. But it was ... interesting.

The next morning I rode over to Avondale Markets, where there was an election campaign on. The Internet Mana crew were at the front gate again: 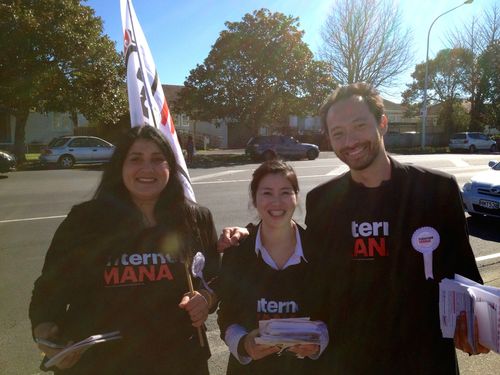 Just inside, the ladies from New Zealand First were fascinated by the man with ankle-length dreadlocks who had paused to talk to them, and eagerly reached for their cameras. 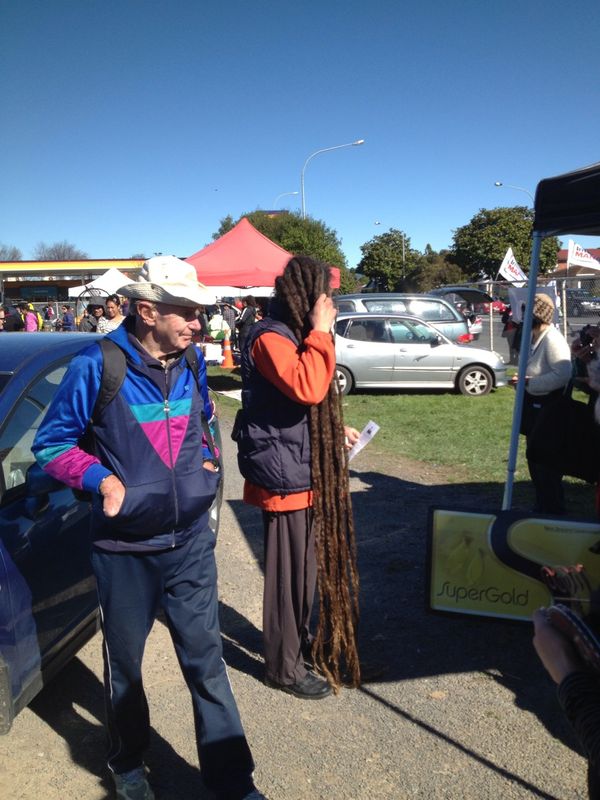 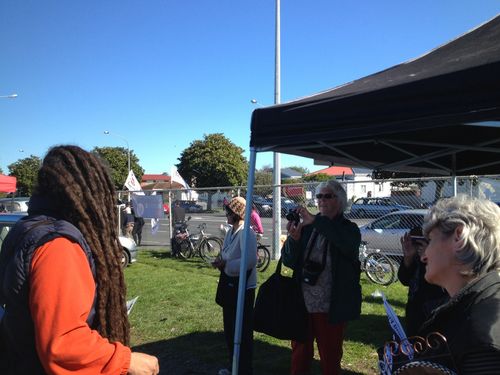 Over behind the grandstand, Labour people were out in force -- and in red. 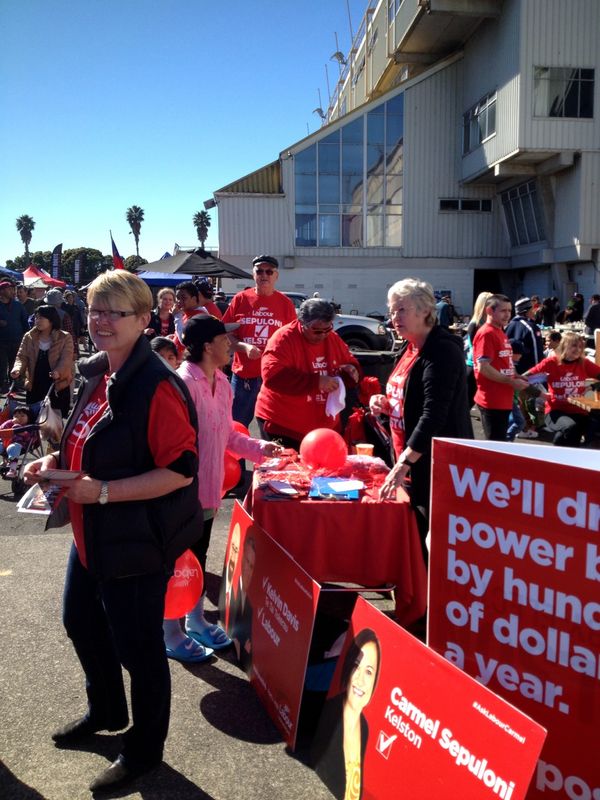 I gather the Greens and the Conservatives were also working the crowd, but I missed them. I hope they all had a good time. It seemed a good day for doing democracy.

After lunch I walked over to Western Springs College to have a look at the Internet-Mana campaign launch. By and large, it was full of the same jolly spirit. And then this weird thing happened.

Like almost everyone else, I missed it. I needed a beer, so we strolled home and caught the sunset on the deck, which quite delightfully lit up my awesome Avondale Markets purchase. These two little beauties from Temuka -- for five bucks the pair! 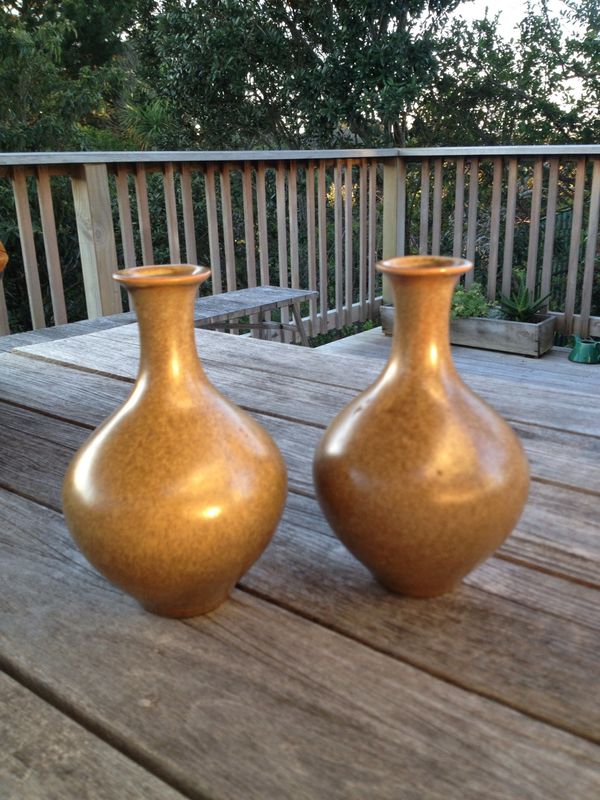