For some time last Wednesday, this was the second-lead story on the award-winning website of the New Zealand Herald. 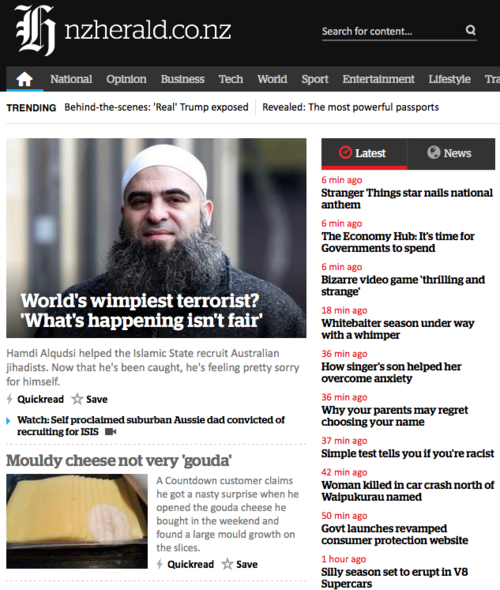 The man had, as it transpired, taken several photographs of the cheese with the mould on it and posted them on a Facebook page, whereupon they were discovered by the Herald. In the post, he urged the supermarket to "lift your game". While it's easy to sympathise with the man – he probably had the crackers out and everything, maybe even a beer –  that seemed potentially unfair given that the cheese, as his photographs clearly showed, had a best-before date of November 2016.

There are a number of scenarios under which this apparently ordinary tale might have been newsworthy. If the supermarket company had brazenly said it would not replace the cheese. If someone had eaten the cheese (which would have been stupid) and subsequently felt unwell. Or if there was evidence that this kind of manufacturing fault was widespread. None of these scenarios applied.

The Hibiscus Coast Facebook page, where the original post was made, is a closed group and I frankly couldn't be bothered requesting admission in order to see what kind of discussion took place under the cheese post – but I'm guessing it was of the order of "you should take that cheese back bro".

Was it the opportunity to make a clunking pun in the headline the reason for the moudly cheese story's giddy elevation not only to the website, not only above the fold, but to the second lead spot? (It should be noted that strictly speaking, that's not how you pronounce "gouda".)

Well, no. There's something broader going on here. Look again at the screenshot above, to the "Latest" column. It's a mix of stock news and the kind of thing your stupid friend insists on sharing on Facebook. But at the top of the box, you may notice that there is a second tab, marked "News". The next time you visit the Herald website, try clicking the "News" tab. What happens next will move you to tears.

I confess, I literally only thought about the second tab while I was writing this blog post. I guess I just assumed that a newspaper website would carry news as a matter of course. But I'm guessing that that "News" tab is automatically populated straight from the news service feeds to which the Herald has rights: the headlines are the wordy, overly descriptive giveaway. But the stories are definitely news, from all over the place.

I presume that those stories, after they drop out of the box, still exist somewhere on the Herald website. But good luck finding them. This is the 'World' section of the Herald earlier today: 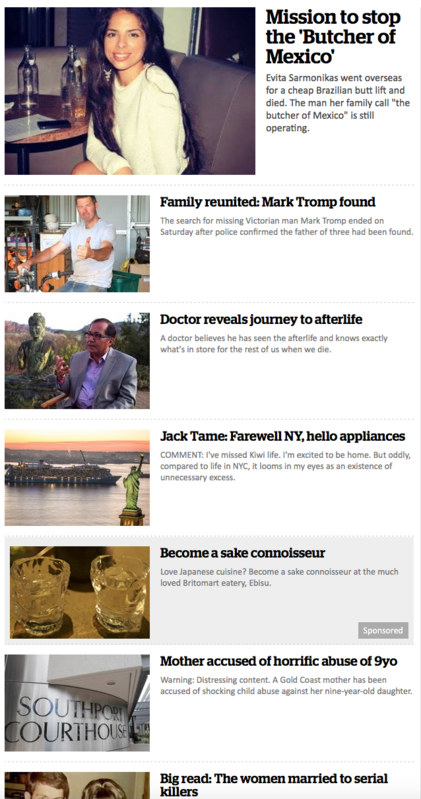 Not one of these top-ranked stories is important international news, although the Tromp story has been big in Australian media and is odd and intriguing enough to warrant notice. Several of them aren't news at all. One is a column about returning to New Zealand by Jack Tame (whose work I enjoy) and another is being billed in the 'World' section because a Japanase restaurant in Auckland has paid for it to be published.

Well, you might say, it's 2016 and the internet is a thing: surely we can read all the international news we want on the websites of The Guardian, the New York Times and countless others. But that's not really my point. My point is that news is being systematically obscured.

It's a point made in some style in a column by former Herald editor Tim Murphy in a column on Stop Press last week:

Fairfax’s stuff.co.nz was first to put being biggest ahead of best. It now boasts more than 2 million uniques a month, is bigger than the NZ Government site and Trade Me and sits a confronting 400,000 readers/viewers ahead of nzherald.co.nz on 1.6m.

The Herald has in the past 18 months also targeted being number one. It has mimicked Stuff, shadowed it, copied it and now forced Stuff to do the same in return. They have both lifted what commentators call their ‘digital metabolism’ and cannot be faulted for the number of pieces of content produced and highlighted daily or the colour, pace or cutesiness of their menu.

Within these sites, beyond the homepages or the top half of the homepages, and not so often directed out via social channels like Facebook and Twitter is so much good journalism.

It perhaps isn’t so much the death of journalism but a big cover-up. Sweeping the journalism under the fluff of the carpet. And here is the worry. If the audience is constantly presented the sugar and not the protein or greens, there is a risk that an obesity crisis of information develops. People are left dulled and de-energised.

It doesn’t have to happen. Excellent news organisations, general and mass market ones, which have inspired executive leadership are finding a third way between clickbait and earnestness.

Tim talks about the past 18 months, but my feeling is that there has been an additional lurch in the past month or two. The website has become more crowded than ever with lifts of heavily-contrived Daily Mail stories, what Tim describes as "foreign stories ... paraded with a geographic anonymity that dupes and frustrates readers who bother with that click", things pillaged from social media and the kind of trivia your stupid friend insists on sharing in their Facebook feed.

There are various problems with this. It degrades the paper's reputation. (I'm often found explaing that the printed version of the Herald is still actually pretty sound, that the Herald employs some of the most badass investigative reporters in the country, is doing great things with data journalism, etc). Actually obscuring the origin of a story to deceive the reader is an act of contempt for that reader. And, perhaps most of all, it's really demoralising for the journalists.

And they are demoralised by it. When you report something you think matters, you want to see that reporting reach an audience. And that's often simply not happening. Senior journalists and even section editors are having trouble getting the paper's own reporting "above the fold" on the Herald's home page, or even anywhere prominent. There seems to be a problem in the other direction too: one reporter told me that it seemed impossible to get the "kids" in digital to act on social media tips that were genuinely newsworthy. They're not even stealing the good stuff.

The problem isn't entirely new or unique to the Herald: I've seen a One News reporter complain about "digital" bodging together a story from multiple third-party reports – and ignoring the organisation's own reporting on the same story. There's your disconnect in one anecdote.

In my chapter in the new book Don't Dream It's Over: reimagining journalism in Aotearoa New Zealand, I talk about the odd disconnect between "digital" – a layer now common across the respective media platforms – and the rest of the editorial enterprise. There are no media awards for most of the work in "digital" (although frankly it might help if there were), but it does require a range of skills and, done well, knowledge, wit, and a firm reciprocal connection to the rest of the internet. Also, inevitably, the ability to work very quickly.

I do understand the demand to constantly be feeding fresh content to a website and to maximise clicks, now matter how empty an experience clicking may turn out to be. I know that there are too many interests involved – including those of readers other than me – to complain much about celebrity "news". I am aware that the day the Herald – encouraged onward by the stats as they came in – put 13 Bachelor-related links on its home page was the website's second-biggest day ever.

But what's happening at the Herald seems particularly screwy and unbalanced. It's happening in pursuit of a low-quality, high-volume model that may well be unsustainable (the exemplar of the model, the Mail Online, the world's most popular news website, was revealed this year to not really be making enough out of digital advertising). It's entirely possible that it's not even a matter of editorial decision-making so much as the constant feedback loop of live analytics.

There are, as Tim points out in his column, better ways to address the challenges. They're also ways that pay better heed to what newspapers are meant to be for and to the reasons any of us got into journalism in the first place. And they're ways that don't treat the readers like rubes.