If you hadn't noticed -- and there's no particular reason you should have -- the launch of the new foodie service My Food Bag, was accompanied by a lot of social media chatter last week, some of it organic and much more of it sparked by New Zealand Herald media columnist John Drinnan's speculation that people tweeting about it were being paid to do so.

Let's get this out of the way first: they weren't. That isn't how this kind of thing works.

My Food Bag is a service branded around Masterchef winner Nadia Lim and backed by a group including former Telecom CEO Theresa Gattung. Customers can, on a weekly basis, order that week's offering of Lim-designed recipes and the ingredients to make them, which are delivered on Sunday in brown shopping bags. There are currently two choices: Classic (recipes and ingredients for five evening meals for four to five people, $179) and Gourmet (four fancier meals for two, $140).

To launch the service, Pead PR devised a pretty standard modern consumer PR campaign: offer one week's order to a bunch of known over-sharers with social media audiences (Auckland-only, because the service is curently only available in Auckland). There was no explicit expectation of a mention, but receipients were asked to observe an embargo on reporting until the launch last Monday, and to use the #MyFoodBag hashtag if they did so.

I said yes to a Food Bag, principally because I was interested in the idea, much as I'm interested in what's presented and how at The Food Show every year. I didn't expect to be discussing it as much as I did, but, well, you know how it is when someone is wrong on the internet ...

But I don't want to dwell further here on the controversy, given that Stop Press has done a useful roundup on the campaign, featuring some of the celebrity tweets (including one by Jay Jay Feeney, who made a lamb and couscous dish that appeared to have been in a fight). It finishes with a quote from Deborah Pead:

"If you want media to talk about it, don't forget to leave John Drinnan off the review list."

And Dylan Reeve wrote useful thinkpieces about whether any tweets should have included the #ad hashtag recommended by the Advertising Standards Authority (conclusion: probably not, because no one was paid) and on the nature of online conversation, prompted by rather egregious paraphrasing in Drinnan's column of some other comments he'd made in the course of an endless Twitter debate.

But what no one has done, so far as I can see, is review the damn product.

The ingredients were all of good quality and included several brands I already buy for myself. Quantities were generous. All arrived safely, except for the little pot of harissa, which leaked around the edges. The value for money actually seems good, given delivery and the cost of printing up the recipes on glossy card for storage in a nice ringbinder --making it, effectively, a partwork cookbook. The recipes are also available on the website, but I was surprised that there isn't an app -- and maybe a branded tablet stand for the kitchen. This is, after all, the market they're selling to.

So how'd I go with it? Not very well. For a start, I was out for two of the first three nights and half the family was out for the other.

Eventually, I made the pizza recipe. Doubtless to the horror of my Italian friend in Wellington, premade bases were provided, but at least they were the decent Paneton ones.

I could have done that in my sleep, but I still wouldn't have made something that looked anything like the picture on the recipe card, which depicted a made-from-scratch pizza topped with rounds of mozzarella (rather than the grated mozzarella provided in the bag). The crispy bacon (Freedom Farms streaky) and rocket salad to accompany the pizza was simple and delicious and I'll make it again. There was nothing really wrong with the pizza itself, but I make a better one most weeks.

We all liked the thyme-stuffed (free-range) chicken breasts, but I'm not much of a fan of pumpkin, certainly not enough to bother hacking one up, so substituted roast potato. After stuffing the breasts with thyme butter, I felt the half a cup of cream in the mushroom sauce looked a bit much, so I skipped that altogether.

Am I tempted to order another week's My Food Bag? No. Apart from anything else, I work from home, so shopping for food gets me out of the house (unless I'm shopping big, I also try and do it by bike). But mostly, I don't want to commit myself to cooking five new recipes a week, when some nights it's all I can do to knock up a tomato sauce (or reach into the freezer for one I prepared earlier) and put it on some pasta. (To be fair, three recipes are repeated this week, one with small amendments.) Perhaps time-poor executives with professional-grade motivation will jump at this, but it starts to feel like a reality show challenge.

But, as I said, the products provided are of good quality, and some of them -- Mutti tomato products, for instance -- aren't widely available. Having those delivered to order would be attractive -- especially, say, in a week where you know you'll be hosting a dinner party. A choice of recipes in the bargain would be attractive and  a "design my dinner party" option would actually be really good.

But as it stands, My Food Bag doesn't offer that flexibility and I suspect that all but the keenest cooks will eventually drop off the rota unless it does. Which would be a shame -- because in other ways, this is a useful and well-designed service.

Disclosure: Public Address has worked with Pead PR at various times in the past 10 years, principally in connection with our Great Blend events, for which Pead have sourced sponsors and provided excellent event management. They've also chipped in prizes for things like our Word of the Year competition.

PS: I was thinking of offering a couple of weeks of My Food Bag as prizes in a cooking-tips thread. Would y'all be happy with that? Or would you rather stay pure?

PPS: Damian Christie, I think, won everything with his execution of the duck dish in his Gourmet bag: 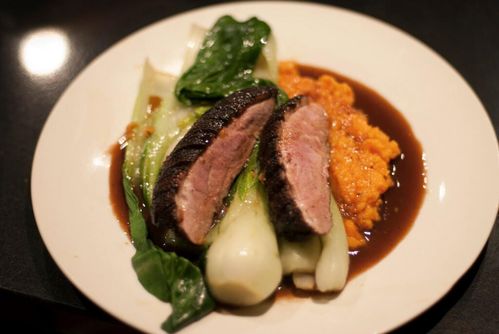