I'm flying solo on this week's Media Take -- for a very good reason. My colleague and co-host Toi Iti had an engagement in the Urewera on Sunday. He was present when Police Commissioner Mike Bush visited six whanau -- including that of Toi's father, Tame Iti -- to apologise for the raids seven years ago in Ruatoki that traumatised families and were ultimately deemed unlawful by the Independent Police Conduct Authority.

A great deal has been written and said about the investigation and attempt to prosecute Tame Iti and others under the Terrorism Suppression Act, but in a media context the story is particularly notable for the apparent attempts by some in the police to leak and spin the most inflammatory elements of the evidence they had gathered. Some news organisations really got played.

It was into this media storm that Toi and his brother Wairere were thrust as family spokespeople. To this extent, the report Toi presents in tonight's show is his story as well. I say this not having seen the report itself -- the timings meant we had to record the show yesterday evening without it. But I'm very confident it will be worth your while watching.

Also in tonight's programme: I talk to Katherine Reed, Associate Professor at the Missouri School of Journalism, about the new face of serious reporting: Buzzfeed and Vice. As big media organisations have withdrawn to some extent from foreign reporting, unlikely players -- a website founded on amusing listicles and cat pictures; and the spawn of a snotty fashion mag -- are diving in.

Former AP Moscow correspondent Max Seddon was Buzzfeed's first hire foreign correspondent hire, a year ago, and his work at and around the MH17 crash site has been pungent and readable in a way you could never imagine him being as an AP correspondent. In particular, reading his tweets in real time has been quite a vivid experience:

One of the rebels casually threatens to kneecap reporters every five minutes. Another is wearing a beekeeping suit and reeks of alcohol.

Vice News's video reporting from the same place has also been notable. It upends the grammar and pacing of traditional TV news reporting in favour of a kind of first-person immersion in events.

It doesn't always work out. Both Vice and Buzzfeed have had reporters taken hostage by Ukrainain rebels. And back home, Buzzfeed has just been obliged to sack its hyper-ambitious "viral politics editor" Ben Johnson after it became clear he'd been committing plagiarism on a substantial scale. It might reasonably be observed that the line on plagiarism is not exactly clear at Buzzfeed, which has built its fame on "re-purposing"others' content.

But it's very definitely a thing. One of Reed's former students, Chris Hamby, caused quite a shock in announcing just after winning a Pulitzer Prize for a series of stories on chronic heath problems among miners that he was off to work for Buzzfeed. But it's not like he'd been working for a traditional media organisation when he won his Pulitzer. He'd been with a non-profit called the Centre for Public Integrity. Perhaps the real key here is that journalism's future might not necessarily be a job at The Daily Bugle.

And finally on the show, a great chat with film-maker David Blyth, who dropped Angel Mine on middle New Zealand 36 years and has taken his own path ever since. We recorded an extra 10 minutes for the Media Take website and even then David wasn't done. Here he is afterwards, holding court with a group of film students who'd been in the studio audience. 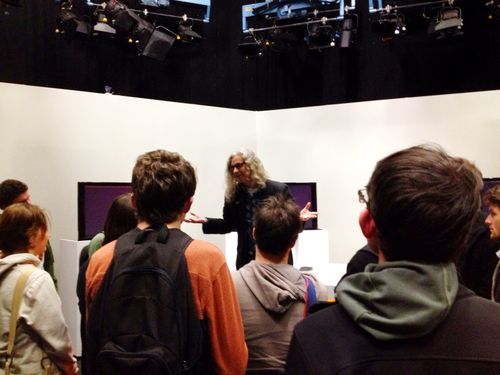 So, we have a really good show for you tonight, at 10pm (note the earlier time) on Maori Television. Tell your friends.