What do these musical artists have in common? Alt-J, Tricky, the Skatalites, Mulatu Astatke, Mac DeMarco, Calexico, M83, The Residents, Tame Impala, Freddie Gibbs, Thundercat and the Sun Ra Arkestra.

Answer: they have all played, or are soon to play, shows in Israel managed by Naranjah, the same company that was promoting the now-cancelled Lorde show in Tel Aviv. They don't appear on the lists of artists whose names are treated as endorsements by the Israeli government and its cheerleaders, and they largely haven't been called out by those who believe Israel's policies should make it a pariah. As far as I'm aware, no one asked them what they thought about The Situation.

Lorde didn't have that advantage. Days after her latest round of tour dates was announced, the Boycott, Divestment and Sanctions movement (BDS) publicly called on her to reconsider playing in Tel Aviv. From that point, she had to make a choice – stay the course, or change her arangements – and the choice she made would be regarded as a statement of position. She had been drafted into a culture war. Or, to put it another way, she was big enough to have been considered a combatant; it was just a matter of whose side she was fighting for.

Lorde's general management is handled by Crush Music and her booking agent is the giant CAA, who would have booked the Tel Aviv gig. But she famously makes her own creative and business decisions and, to her credit, she didn't seek to portray the choice as anyone's but hers. She didn't let it lie and then make a quiet cancellation, like Macklemore and Ryan Lewis did.

She made a personal decision – which was, in the end, the one you'd expect a woman of her age and general progressive sensibility to make. Indeed, the submission that she publicly acknowledged was an open letter on The Spinoff by "two young women based in Aotearoa, one Jewish, one Palestinian," asking her not to go.

Eran Arielli, the founder of Naranjah, expressed sympathy, telling the Jerusalem Post he had been "naive to think that an artist of her age would be able to face the pressure of appearing in Israel," adding that "she doesn’t deserve all the shit she’s had to endure over the past week ... This is not the first cancellation we’ve had, and it won’t be the last."

Ironically, it turned out that the shit involved in playing the gig was nothing on the shit that not playing it has brought down. Israel's Culture minister Miri Regev prevailed on her to "be a heroine of pure culture, free from any foreign – and ridiculous – political considerations." (Ironically, Regev has repeatedly threatened to withdraw state funding from any Israeli artists who speak against Likudnik doctrine. So much for it being "ridiculous" to allow politics to intrude on culture.) The Israeli ambassador to New Zealand requested a meeting. Any number of internet right-wingers unloaded on her. And Brian Edwards wrote a series of pompous, patronising and muddled Facebook posts and blamed social media when people said they didn't like them.

And then, this full-page ad appeared in the Washington Post. 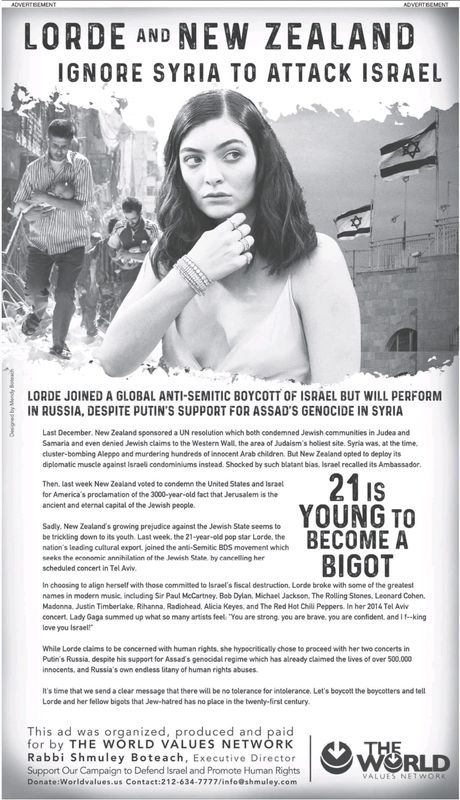 There's a lot to unpick in the ad. The baseless and defamatory smear that Lorde is a "bigot" whose "Jew hatred" aligns her with "those committed to Israel's fiscal destruction". The farcical linking of her decision about a gig with New Zealand's sponsorship of UN Security Council Resolution 2334, which, as MFAT put it:

... reaffirmed that the establishment by Israel of settlements in the occupied Palestinian territory, has no legal validity and constitutes a flagrant violation under international law and a major obstacle to the achievement of the two-State solution and a just, lasting and comprehensive peace.

The resolution carried exactly a year ago, with 14 votes in favour and none against (even the US only abstained).  I'm pretty sure Lorde was at the beach at the time.

The ad also asserts that Lorde, in making her decision, "joined the anti-Semitic BDS movement". In fact, in her statement she doesn't mention BDS. As far as I'm aware, she has never acknowledged BDS at all.

So why wouldn't anyone want to be associated with BDS, whose published goals – an end to occupation and settlement of the Territories, equal rights in law for Palestinian Israeli citizens and the right of return for refugees – are ambitious but roughly in line with the will of the international community?

It's complicated. The founders of BDS consciously (and with the support of various anti-apartheid heroes) adopted apartheid and the global boycott movement against it as a frame for their campaign on the plight of Palestinians. But the two campaigns aren't strictly comparable. The cultural academic and sporting boycott of South Africa had the explicit support of the UN General Assembly from 1968. By contrast, a number of national and local legislatures have passed laws specifically outlawing BDS, even as the movement becomes more mainstream.

But a bigger problem is that pestilence of the "anti-imperialist" Left, anti-semitism; less among the Palestinian campaign founders than some of the white folks who follow them. In 2013, for example, a campaign in the name of BDS against the opening of a Max Brenner chocolate shop at the University of New South Wales turned very nasty, with anti-semitic and Holocaust-denial trash posted on the campaign Facebook page. Jews anywhere have a right to be appalled and alarmed by that. And yeah, it happens here too. I've seen it in the past few days.

On another note, I even had some sympathy with Nick Cave, when he declared he wouldn't be bullied by BDS's torch-bearer in popular music Roger Waters and would be playing in Israel because of BDS.

But BDS's statement in response was worth studying too.

We thank Nick Cave for making one thing abundantly clear—playing Tel Aviv is never simply about music. It is a political and moral decision to stand with the oppressor against the oppressed.

Because if the left-wing politics around this are dodgy in places, the right-wing politics are in many ways worse. The Israeli right, too, aggressively touts its supporters in pop, whether those artists actually endorse Israeli government policy or not. Cave clearly chafed at being hectored by Roger Waters, but he didn't have to deal with an assault like this week's Washington Post ad.

The ad was placed by the World Values Network, which is the creation of Shmuley Boteach, a longtime self-promoter who refers to himself as "America's Rabbi". Last year's exhaustive profile of Boteach by Rob Bryan depicted a fraudster in deep with the most unsavoury elements of the far-right establishment. His ad's invocation of Putin and Assad sits oddly alongside his his enthusiastic support of President Trump and his association with the openly Assadist Rep. Tulsi Gabbard, a Democrat who comes from the creepy RT-reading end of the pool. He is friends with evangelist John Hagee (who blames the Holocaust on the "half-Jew" Hitler) and with Steve Bannon. He even writes for the home of the "alt-right", Breitbart, where he continued his assault on the New Zealand pop star.

And as The Guardian has noted:

While Boteach – whose organisation is funded by the controversial US casino magnate Sheldon Adelson – has been quick to level suggestions of antisemitism at figures he regards as anti-Israel, he has also had no qualms about defending others on the right from the same accusation, including Steve Bannon and the Breitbart website.

In 2016, Boteach defended Bannon from accusations made by Jonathan Greenblatt of the US Anti-Defamation League, who criticised Bannon’s appointment as a White House adviser, saying it was a “sad day when a man who presided over the premier website of the ‘alt-right’ – a loose-knit group of white nationalists and unabashed antisemites and racists – is slated to be a senior staff member in the ‘people’s house’”.

In an open letter to Greenblatt, Boteach vouched for Bannon, saying it was unfair to object to his appointment on the basis of Breitbart’s content or audience.

Like BDS, Boteach glommed on to Lorde as a way to fuel his cause. Had she decided to play Tel Aviv, she'd have been added to his roster of pop friends of Israel. Because she decided otherwise, she's subject to a vicious, defamatory attack. It all makes headlines and helps Boteach's profile.

It cannot be emphasised enough that the New Zealand Jewish Council wants nothing to do with this and its chair Juliet Moses has criticised the ad. Wellington-based Davd Cohen, who was also disappointed by her decision, wrote in a column for the Times of Israel that it in no way amounted to bigotry. But Moses's column slating the supposed "bullying" that turned Lorde against her Tel Aviv show looks a bit thin in light of what Lorde is now facing. Would you want to be targeted by the Bannon-Breitbart shitmonster?

It's all an illustration of the almost unmanageable politics that Israel and its government's policies carry with it – most notably outside Israel. As ever, the debate within Israel is more lively: the Wikipedia section on the resistance (notably from academics who would lose out from an effective educational boycott) to official attempts to ban and criminalise even verbal support for BDS is illustrative of that. And in many ways, Israeli government is more tolerant and liberal than the Palestian authorities – as part of its 2016 report Human Rights Watch noted that the four official executions in Gaza in 2016 included that of "one person accused of same-sex relations".

At least five categories of major violations of international human rights law and humanitarian law characterize the occupation: unlawful killings; forced displacement; abusive detention; the closure of the Gaza Strip and other unjustified restrictions on movement; and the development of settlements, along with the accompanying discriminatory policies that disadvantage Palestinians.

Many of Israel’s abusive practices were carried out in the name of security. Palestinian armed groups have carried out scores of lethal attacks on civilians and launched thousands of rocket attacks on Israeli civilian areas, also in violation of international humanitarian law.

"Whether it’s a child imprisoned by a military court or shot unjustifiably, or a house demolished for lack of an elusive permit, or checkpoints where only settlers are allowed to pass, few Palestinians have escaped serious rights abuses during this 50-year occupation," said Sarah Leah Whitson, Middle East director at Human Rights Watch. "Israel today maintains an entrenched system of institutionalized discrimination against Palestinians in the occupied territory – repression that extends far beyond any security rationale."

Maybe you don't get to parade around as a member of the liberal democracy club when you harbour that ulcer.

Your view of these issues is going to be strongly governed by who you are and where you're from. I get that there's an existential echo around any threat to Israel that I don't automatically hear. But Lorde, having been thrust into the controversy when others weren't, has made her personal decision – the one you'd roughly expect given who she is and where she's from – with some grace.

And now she weathers the storm. It might be wise and decent to not make that any harder for her.

Hi folks. Normally, I'd welcome comments here, but I honestly don't have the energy during the holiday period to oversee a discussion that would undoubtedly need pretty much constant watching. Sorry, but comments are off.