The Barkers Sundae Session with Connan Mockasin, recorded on a central Auckland rooftop back in January, has arrived without fanfare on the New Zealand Herald website. It was a beautiful evening in more ways than one and I think the video of the event captures that.

I'm particularly pleased that they've included the finale – Connan's dad Abe stepping up to take the lead vocal on a version of 'While My Guitar Gently Weeps'.

The page on the Herald website has background on Connan and individual clips.

The above will be the last of the Sundae Sessions in that form, because their eponymous creator Hugh Sundae has left the Herald to become the new general manager at 95bFM. They've been sad to see him go at the Herald. I happened to have a chat with the paper's editor Shayne Currie recently and he observed to me that Hugh "took us in a direction we never expected to go."

I think the key thing about Hugh is that he has never really been trained in anything – he's simply very adept at finding ways to do things. The Sundae Sessions were all about that, and that part of his nature will be crucial in his new role, which offers a world of opportunity on a shoestring budget.

I popped up to the station yesterday for the farewell drinks for Suzanne McNicol, who has been serving as interim manager. It was good: there were new faces and old, and people who hadn't been up to the bFM office in years. When I found myself working with Mark Easterbrook to engineer the cork out of a dodgy bottle of wine from the giveaways cupboard, I thought, yeah, this feels like the b.

In her brief spell at the helm, Suze has laid the ground for what I think will be a significant revival in the station's spirit. There is every reason to be optimistic about the little station we love.

This week's relaunch of the music streaming service Tidal by its new owners – Jay Z and a cluster of very wealthy pop stars – rightly occasioned a good deal of scorn. But once the dust had died down, I think this column addressed the problem that Tidal doesn't fix. It's all very well wanting a better deal for artists, but targeting the low-margin retail part of the whole thing isn't going to level the playing field the music companies have made.

Another good read: this week's Lee Perry webchat for The Guardian.

And Gareth again, with the intriguing story of The Brunettes.

One of the best things I've ever done happened at Easter 26 years ago. After a year in the midst of the acid house revolution in London in 1988, I came back to New Zealand for the summer and ran New Zealand's first acid house parties, two of them, under the Housequake! banner, at the Powerstation.

As you tend to, I was operating at London speed and that certainly helped get shit done. But didn't do it on my own, and could not have. What made it possible was connecting with my friend Grant Fell, who marshalled a team to make the party happen. Most notably, that team included the furiously creative Stuart Page, who designed and printed the best poster ever. I did the type (and, as Mark Cubey pointed out to me last night, could not spell "colossal") but the really connected, hands-on part was screen-printing each giant A0 poster in his studio. 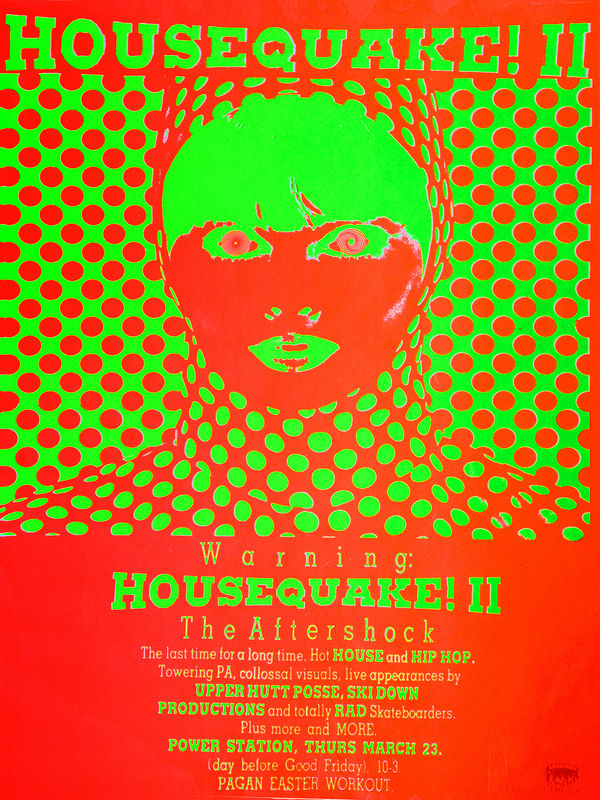 As he has done for me more than once in my life – and for many others throughout his life – it was Grant who made things happen. It's time to pay that back. Grant was diagnosed recently with an aggressive brain tumour and his many friends are getting together to raise money for Grant and his longtime partner Rachael as they fight hard for his life.

There's a Facebook page that anyone can like to join the support network and a Givealittle to get the fundraising underway. On April 15 at Golden Dawn there will be a benefit gig where, aong other things, Stu and I will be giving some of those Housequake records a spin. And I expect the forthcoming Trade Me auction will be pretty special.

If you've ever loved any of the things Grant has helped make possible – Children's Hour, Headless Chickens and Planet and Black magazines among them  – now would be the time to say thanks in a practical way.

Now that Lorde and Kanye are besties, surely there's there'll be a collab coming along. Well, you don't have to wait. San Francisco's Charlie Kubal, aka Wait What, has made an album mash-up of Pure Heroine and Yeezus. Yes, really. And it's not bad!

I'll write more about this next week, but there's all kinds of noise happening around this album that has suddenly appeared from Dunedin's Kane Strang. You can read more about him in Martyn Pepperell's interview for TheAudience.

There's been a bit of a buzz recently about the true identity of a mystery house producer called Claptone. Was Claptone really Aphex Twin, or Fat Boy Slim? Turns out, Claptone is the alter-ego of the impossibly cool Idris Elba. I knew he was a DJ, but this mix he posted on Soundcloud is bloody great – and a free download to boot.

Spotted via the excellent NZ On Air Soundcloud account ...

This noisy, bustling bit of goodness.. I am assuming Modern Chair are named after the factory in Mt Roskill, whose signage has endured longer than its furniture.

A rap-enhanced version of She's So Rad's disco special 'Breakout':

A little of the new folk sound of Auckland from Paper Cranes:

And this huge slab of soul from Team Dynamite and Laughton Kora:

And finally, it's wacky but but kinda nice: a downpitched rework of Fleetwood Mac's 'Dreams'. Heh ...