It's New Zealand Music Month – which, as noted here in the past, these days means a month of loosely-coordinated events, rather than any compulsory patriotic exercise. Do it right and it'll be fun, promise.

Many of the details can be found here on the official New Zealand Music Month website, where the event guide is somewhat usable this year (in theory you can embed it on your own website, but that didn't work at all for me). It's easier to get an overview by going to the events section of the NZMM Facebook page.

Of note in Auckland this evening, Sandy Mill and Tina Turntables team up for an early show (doors 5pm, Sandy's on at 7pm) at Lula Inn down at the Viaduct. Sandy's celebrating the release of her excellent debut EP, A Piece of Me, which includes the three singles so far and two more songs. It's here on Bandcamp along with the digital version, which includes two remixes of 'Let It Go' and one of 'Giftbox'. The 'Giftbox' video went up today too:

Tomorrow night, the PumpHouse Theatre in Takapuna sees the launch gig for Dominic Blaazer's debut solo abum The Lights of Te Atatu, which will feature his seven-piece Maximum Philharmonic Orchestra. Like Sandy, Dominic has been a vital part of a lot of other people's bands and and is now stretching out and playing his own songs. You can book for the PumpHouse show here. But I also have a double-pass to give away today. Just click the email icon below the post and email me with "Dominic" as the subject line. I'll draw a winner around 10.30am tomorrow (Saturday) morning, so don't muck about.

For club folk, the very good K2K plays a gig at Aura Club along with DiCE (more of whom below) tomorrow night too.

It's not just gigs: in Wellington, Ngā Taonga has a season of vintage Radio With Pictures episodes presented by Karyn Hay and Dick Driver, with a guest appearance at one by yer actual Barry Jenkin.

And it's not just the usual venues either. Albi from Albi and the Wolves plays Auckland Central Library at 6pm today and the city's libraries have an extraordinary array of performances, workshops and more for the whole month.

I'd wager, however, that none of them will be quite as wild as what Christchurch Art Gallery is putting on tonight to marks its 15th birthday on the current site. Performances from Into the Void, Astro Children and more. They're some groovy fuckers at that gallery.

Blues dude Darren Watson's new album Too Many Millionaires has been gett great reviews here and abroad. He launches it officially at The Wine Cellar on Saturday week and he's on the road with a release tour all month.

The are plenty of guys playing blues in the world, not so many who ground it so explicitly in real-world politics as Darren does. If the name seems familiar, it was Darren and Jeremy Jones who fought the Electoral Commission over the right to have the 'Planet Key' song heard. You can find the new album here on Bandcamp and read more about Darren in John Pilley's brand-new Audioculture article on his career.

Dunedin natives Ha the Unclear are back with a new single, 'The Wallace Line', from the Invisible Lines album to be released in July:

In a slightly mad move, there's Corduroy Cape: A Persnickety Mixtape, a  digital "split single" on Bandcamp, featuring three tunes each from Ha the Unclear, Being and Soaked Oats. There are two tracks available now and the full nine drop on May 15, whereupon the three bands tour together: 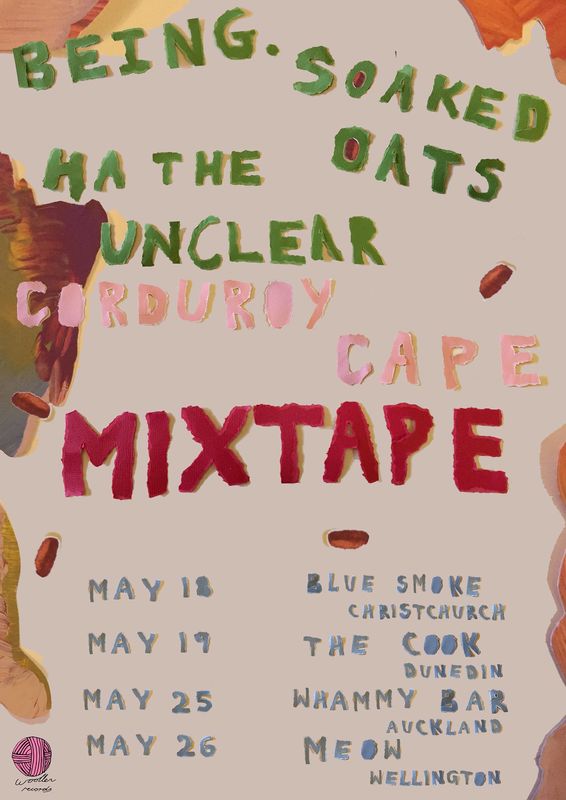 I've been out a couple of times lately. One was for a rich and rewarding evening of Graeme Jefferies playing songs from This Kind of Punishment, The Cake Kitchen and his his solo records at The Wine Cellar last Friday. Here he is finishing the show with 'The Old Grey Coast'.

The song before that was a cover of the Great Unwashed's 'Born in the Wrong Time', which Graeme encouraged to sing along with in memory of departed friends. And we all kinda did.

And last night, I went along to Public Service Broadcasting at the Powerstation. I had an idea of what their work is about – propulsive, enveloping tunes in which the "vocals" are samples from library film from the 60s and 70s – but had barely actually heard it. I was offered a couple of tickets, so I investigated.

I did find myself wearying a bit at the fact that nearly all of those vocals are male voices in a particular register, and I liked their upbeat, bouncy stuff like this more than the drone-rock numbers, but it was basically pretty great:

We can't know exactly what the man himself would think, but the exposure of his huge vault of previously-unreleased material really is turning up some stuff. And nothing compares to this ...

You may recall me enthusing over Auckland DJ crew DiCE's remix of Aldous Harding's 'Horizon' a while ago. Well, they're back, with a regroove of Fat Freddy's Drop's 'Cortina Motors' and it's an absolute bloody belter.

That's a free download and there are lots more of those on their Soundcloud. (If you fancy a better-than-MP3-quality file, some of it is available at a price of your choosing on their Bandcamp page.)

A couple of mixes from New Zealand DJ-producers. First, K2K:

And Chaos in the CBD doing an excellent Boiler Room set – in Lebanon! (The video is here and a partial track listing is here.)

And finally, pretty excited about this: Jon Hopkins' album Singularity is out today. The New Yorker review does a pretty good job of explaining who he is and what he's about. The title track is on Soundcloud ...

And you can buy the album at Bleep.com, in everything up to 24-bit WAV format.