The New Zealand Music Awards finalists were announced last night and they're quite a varied and interesting bunch. Lorde's Pure Heroine  is eligible this time and you'd assume she and Joel Little will be up on stage more than once on the night, but there are some other good records there too: most notably Ladi 6's Automatic, her most mature and authoritative work to date.

Ladi's up against Lorde in all but one category -- best hip hop record -- and with all due respect to David Dallas and PNC, it'd be a shame if she didn't win at least that.

Elsewhere, the, erm, controversial @Peace are nominated for best group (I'm calling for an onstage collab with Sol3Mio) and Tiny Ruins is officially out of the "obscure" category with three nominations, including best album.

Supergroove are this year's Legacy Award recipients, which suggests a jolly evening all round. Shame I won't be there on November 20, but I have a beer-appreciation appointment in Europe and that's where I'll be.

@Peace also have a new video for 'Gravity' from their @Peace and the Plutonium Noise Symphony album out this week and man, they're getting old ...

Vice's Noisey section has an interview with Tom Scott about the making of the video.

In less cheery industry news, the bottom is falling out of the music retail business. US digital sales (iTunes, mostly) for the first nine months of 2014 are down significantly  on the same period last year (12.9% for singles and 11.5% for albums) and not one artist has cracked a million sales for the year. Vinyl sales are the only retail category on the rise, and also the smallest.

The streaming music era is fairly rushing up and it's not really clear how it's all going to work out. For now, streaming is only delivering good income to megastars and companies with large copyright portfolios.

In not-unrelated news, Iggy Pop spoke frankly in this year's John Peel lecture, not least on the matter of YouTube's dealings with indie labels and artists for its new subscription deals:

Pop said: "YouTube's trying to put the squeeze on these people because it's just easier for a power nerd to negotiate with a couple of big labels who own the kind of music that people listen to when they're really not that into music. Which of course is most people.

"So they've got the numbers. But indies kinda have the guns. I've noticed that indies are showing strength at some of the established streaming services like Spotify and Rhapsody. People are choosing that music.

"It's also great that people are starting their own outlets like Pledgemusic, Bandcamp, Drip etc. As the commercial trade swings more into general showbiz, the indies will be the only place to go for new talent outside the Mickey Mouse Club.

"And so I think they were right to band together and sign the Fair Digital Deals Declaration. There are just so many ways to screw an artist that it's unbelievable."

That's going to be on BBC 4 on Sunday and I think I'll have to get a copy for purposes of criticism and review.

Of note on Audioculture this week: Gary Steel's look at the singular Rattle Records.

And at the other extreme of style, taste and, well pretty much everything, that Hogsnort Rupert retrospective you've been waiting to show your grandkids.

Andfinally, a profile of the fabulously obscure -- and fabulous -- 70s psych-funk outfit from Fiji, Mantis. They made one album and it sounded like this: 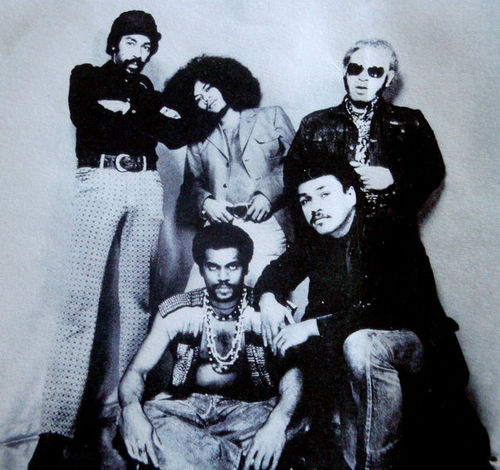 You may know longtime man-about-the-Auckland-club-scene Bharat Jamnadas. You may not know that he was Mantis's manager!

Jakob's long-awaited album Sines is officially out today, sorta. The vinyl version has been delayed until the end of November by global demand on pressing facilities. It's been there on iTunes for a few days, but the Bandcamp version is still stuck on pre-order. If there's any album you'd want in full spectrum format it's this one, so I think I'll either be waiting for Bandcamp or trying my luck a record shop.

If you're in the neighbourhood of Ponsonby, there is a Sines listening part at The Golden Dawn from 6pm-8pm, where should create an interesting vibe for after-work drinks.

Also in Auckland this evening: Margaret Gordon's documentary about Christchurch's long-running art project/Sabbath tribute band Into the Void screens at The Academy Cinema at 6.30pm and that's followed by an actual Into the Void gig at Wammy bar.

The Clap Clap Riot and Buzz Mollar show is at Meow in Wellington tonight and at the King's Arms in Auckland tomorrow.

And I'm picking a late night in Queenstown as @Peace begin their vinyl release tour tonight.

I noticed that The Checks posted something to their Facebook for the first time in ages this week. and then I noticed that Sven and Ed from The Checks are back playing with their new band Racing and they have this track on TheAudience. It's some absolutely shit-hot rock'n' roll:

She's So Rad have taken a track from Kimbra's 90s-inspired album and wound it back to the 80s.

Gorgeous minimal house from the London producer Dauwd. Thanks to Eddie Johnston for the tip. From an EP out in digital form next week:

Things still happening for Janine and the Mixtape. Her song 'Hold Me' is now out in a new version with a rap verse from Pusha T:

And finally for your weekend -- some up-on-the-downstroke funk for the download: