I was fortunate enough last night to see One More Time With Feeling, the unusual documentary created to serve as a once-only interview in advance of the release of Nick Cave and the Bad Seeds' new album, Skeleton Tree.

Strikingly, for nearly two thirds of the film, they don't directly talk about it. Indeed, if you went in without knowing the story, you'd end up as bemused as the Variety reviewer who complains about "this dithering" and ventures that "something seems amiss" in in Cave "never remotely confronting the issue of whether he feels in any way responsible for the death of Arthur".

There was course, no end of public commentary on Cave's alleged responsibility for his son's death after Arthur fell from a cliff after taking LSD – among other things, Cave watching horror movies with his kids was cited in a vile story in The Times – and Variety's hapless tut-tutting merely rehearses the unpleasantness the family has had to bear.

The rest of us went in with more open hearts. It's awkward for everyone, and Dominik contrived to underline that awkwardness by deciding to shoot not only in black and white, but in 3D. The film deliberately breaks itself in its opening minute, when the unreliable 3D camera fails as Cave's bandmate Warren Ellis attempts to explain what his friend has endured.

Eventually, the first of five songs from the album, 'Jesus Alone', plays. Dominik captures not the original writing-recording process, to which he doesn't seem to have been privy, but a pick-up vocal that Cave clearly struggles to muster. There are long minutes of self-doubt, sitting at the piano, before he sings it. He's vulnerable.

The song, when it comes, is cavernous, dissonant, haunting, and Dominik's direction makes it even more those things. I found it an affecting, slightly disorienting experience  in 2D and I imagine it must have been more so in 3D (on the other hand, I feel like wearing 3D glasses would have been difficult, as if something was in the way). The juxtaposition of this lush choreography and the observational sequences – they're fucked up sometimes, because everything is fucked up – is central to the film.

"I'm not sure about the songs," Cave remarks at one point, explaining that he and the band simply had to let them go forth. You can sense it: there's an artlessness in places you don't usually hear in Cave's work. He repeats a line because he doesn't have one to follow, leaves in one that scans awkwardly.

Ultimately, it's a film about grief, which compels Cave's fashion-designer wife Susie Bick into creative work when she doesn't even know why, but proves impractical as material for Cave himself. It's just too big, too awful.

One More Time With Feeling is remarkable, awkward, beautiful, moving. Most people in the theatre seemed gobsmacked afterwards. About half of us stayed in our seats right through to the end of the credits.

In theory, the film had its first and only screening in cinemas all over the world last night. But you'd think it might come back. If it does, and you feel something for Nick Cave's work, you might want to see it.

There was a loss closer to home last week. Stephen O'Hoy died after suffering a brain aneurysm. I first got to know Stephen when he helped sell my Great New Zealand Argument book while he was working at Amplifier, where he helped many local labels and artists to get their music on the internet for the first time. (Before that, he managed One Million Dollars, and there some laughs at the wake about the kind of person who would take on managing a 12-piece funk band.)

Stephen was Australian-born, of Chinese heritage (he was often mistaken for Pasifika). He was clever, kind, funny  and – this word has come up a lot in the past week – gentlemanly. His wife Ros and their daughters have suffered a terrible loss. And the local music community has lost one of the good men too.

You can get a sense of Stephen's musical identity via his turn on the Music 101 Mixtape:

I heard the news about Stephen standing on K Road last Friday night in the midst of The Others Way festival, on what was otherwise a marvellous  night. The evening began for me with an enjoyable onstage interview with Roger Shepherd about In Love With TheseTimes: A Flying Nun memoir, in the fale at Samoa House.

From there, I saw Nadia Reid (new songs!), Voom (who were in great form), Hex (a heavy, awesome all-woman power trio from Wellington), Shocking Pinks (brilliantly rhythmic), Yoko Zuna (a surprise funky party, especially when Randa got on the mic), David Kilgour (good, but a little down on atmopshere compared to some of the other shows), King Loser (at once comedic and compelling), Ghost Wave (now evolved to stoner electronica, and quite unlike anything else on that night) and The Phoenix Foundation (who clearly had a magnificent time, ending with a very raucous version of 'Buffalo').

But it wasn't just the bands, it was the people. The atmosphere was great, like a big party up and down the strip. And I think you only get that when you get a lot of little things right.

But for all that, Ben Howe at Flying Out isn't sure whether The Others Way will be back in 2017. It's an enormous amount of work for a very slim margin and the festival needs external support to continue – probably from both council and commercial sponsors. I hope that happens and I'm happy to lend my support to anything that will help it happen.

I took some pictures. Here's Buzz from Voom: 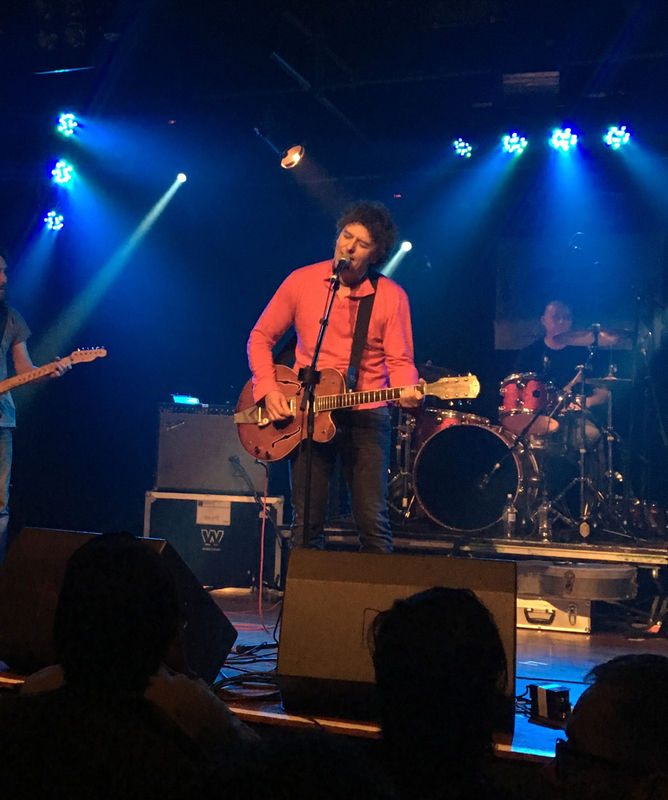 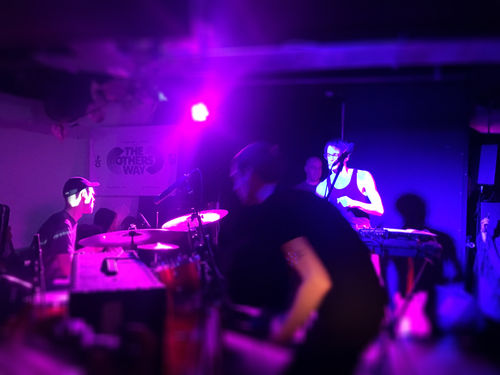 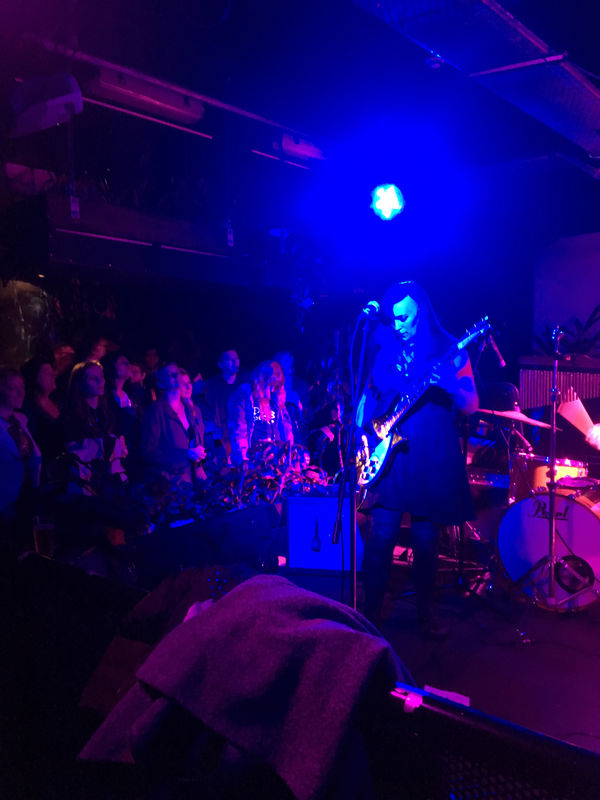 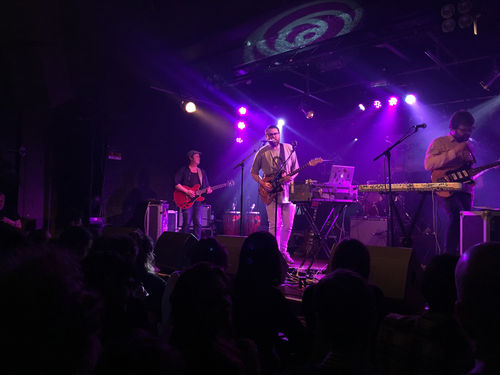 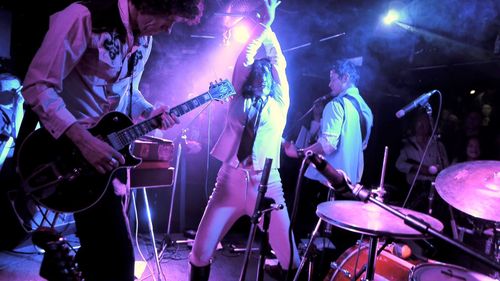 Although I maintain my King Loser pic is also an accurate representation of the vibe: 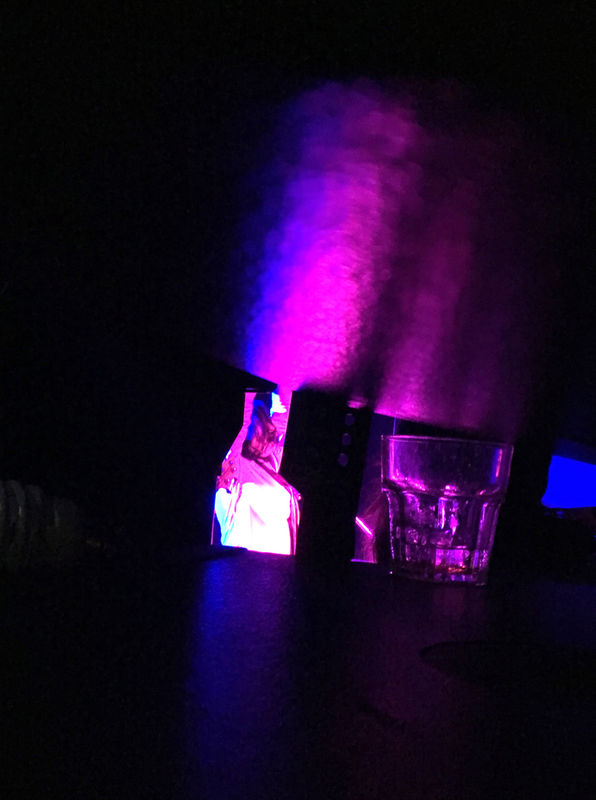 Meanwhile, Ben's former business partner in Auckland Laneway festival, Mark Kneebone – who was there enjoying himself on Friday night – had some happy news to share this week. Laneway has a new site: Albert Park, Princes Street and Alfred Street, with the main stage on Princes Street. The new site is 75% bigger than the Wynyard one, but the crowd limit will remain the same at around 12,000.

It promises to be a much more comfortable experience – and there's a symmetry there, given that the Lantern Festival has vacated the same precinct in favour of The Domain, where Laneway thought they were going to be able to go this year, leaving them in danger of not having an Auckland site at all.

Mark shared the news with me a couple of weeks ago, when I was at Mamata on the Saturday-morning bagel run (Mark had a pie) and he said  that it hadn't been easy to secure the site – and that the person who'd done more than anyone to get the festival over the line was Auckland Central MP Nikki Kaye.

I gather she was keener to make the case on the basis of the employment and economic impact of the the festival rather than the intrisic merit of people dancing in the streets, but all praise to her for helping.

Emily Littler looks back on Street Chant and explains why the band is ending.

At Audioculture, Redmer Yska recalls a country music scandal – one that cluminated in its very own Commission of Inquiry!

British music mag The Wire reports that Christchurch's Roy Montgomery is back with his first release in a decade – a four-LP box set.

And ... Ben King recently shared on Facebook part one (the other 17 parts are on YouTube too) of the 1989 "documentary" Hells Bells: The Dangers of Rock 'N' Roll, which is described as a "journey thru the dark side of Rock 'n' Roll music and its negative influence on society from a Christian perspective."

I had assumed that this sort of thing was confined to certain states in America, but Ben's school screened it to puzzled students and it appears that many others did too. How very, very strange. Also, it appears to have been singularly unsuccessful in deterring young folk from embracing the Devil's music.

Leisure build up towards their alvbum release with another sleek single.

The Roulettes' new single has been compared, I gather, to Brough-era Straitjacket Fits – and yeah, it's got the slow burn and the sweet vocal allright. You can buy it for a dollar here on Bandcamp.

This is a mash-up that works: Jamie Xx's 'Good Times' vs the Dre Skull remix.

And finally ... don't forget that I and a few other people will be selling vinyl from our archives at Southbound Records in Symonds Street from nine till noon tomorrow. I'll have interesting dance 12"s, some rare indie 7"s, randcom albums and the odd original Flying Nun gem. All fees go to 95bFM's Bombathon fundraiser.