One of the interesting – and challenging – things about urban music festivals is the way they interpret their environments. Promoters have to consider not only where people goes, but where sound goes. And then they have to get the whole lot signed off by council.

It doesn't always work out: witness the infamous back-to-back stage at the first Auckland Laneway in Britomart Square. And when promoters do work out a site and get all the necessary consents, they tend to like to stay there as long as possible. Laneway, for example, will be hoping to make Albert Park home for years to come.

Sometimes, festival sites get tired or out of step with what the audience wants – as Mt Smart Stadium did for the Big Day Out. When promoter Campbell Smith took the BDO to Western Springs park for its last hurrah in 2014, the new environent changed the whole feel of the festival. The evolution continued with its successor, Auckland City Limits in 2016, where the extra space available meant the event could cater for a group of punters long left out – kids.

As it does at Splore, the presence of children onsite created a welcome moderating influence on adult behaviour – and the compromise on alcohol licensing which allowed everyone to roam the site with a mid-strength beer worked pretty well.

ACL didn't happen this year because Smith couldn't get a lineup he was happy with – and as this Herald interview indicates, Smith was counting his blessings as he watched torrential rain on what would have been his show day. But it's back next year, on March 3.

I had a chat with ACL's event manager Etienne "ET" Marais and he confirmed that the mid-strength approach will be a feature again at 2018's event. And that they'll be working hard to improve the capacity of bar and toilet facilities. (Liquid in and out is another challenge for festival managers.)

The site will operate much as it did in 2016, but Etienne says there will be a few surprise features.

One thing that makes life easier for promoters these days is modern PA systems, which are much better at directing sound where it's wanted. The fact that ACL's outer stages can be right on the site boundary but stay within noise limits (which will actually be slightly higher for 2018) is remarkable. "Bleed is barely an issue any more," agreed Etienne.

They're looking for ACL to be an annual fixture at the Springs for years to come. Given this week's Auckland transport announcements, one day you'll be able to arrive right at the gate of the stadium by light rail. This is a very cool thought.

But for now – that 2018 lineup! As had been widely rumoured, Grace Jones will headline alongside Beck and the bill also includes Justice, The Libertines and Thundercat. (In an extra bonus, ACL no longer clashes with Womad.) I am very up for this one.

And because we're here to help at Friday Music, I have a double pass to Auckland City Limits to give away today. Just click the email icon at the bottom of this post, put "ACL" in the subject line and I'll draw a winner on Sunday.

As previously noted, if you're in Auckland on New Years Eve, you have access to an excellent local lineup at Wondergarden down at Silo Park and you can still get home for a quite dram and a sleep in your own bed afterwards.

One the same night, Rhythm 'n' Vines has Schoolboy Q, 2ManyDJs and Felix Da Housecat alongside a couple of acts (Baauer, eeww) I'd pay money to avoid. But I get that it's not for me.

Womad's full lineup is out and includes Adrian Sherwood, Kamasi Washington and Thievery Corporation. No word on any sideshows for Mr Sherwood, but Kamasi is playing what will surely be a sellout at the Powerstation on March 16 (tickets went on sale for that this morning).

And if sitting comortably is your thing, the New Zealand Festival in Wellington in March has what looks like its strongest-ever contemporary music lineup, with Grizzly Bear, Perfume Genius, Thundercat and an array of local offerings including Nathan Haines and a Lawrence Araba-Luke Buda-Samuel Flynn Scott special.

If you ever loved Garageland, listen to this:

Galveston is the new project from Garageland's Jeremy Eade and that's Jeremy's first single release in 16 years. (Yes, the name does come from the song Jimmy Webb wrote for Glenn Campbell.)

And if you live thereabouts, be aware that Galveston are playing a free gig tomorrow night at the Grey Lynn RSC, 3 Francis St. Support is Ocean Beach and the doors open at 8pm.

There are two notable DJ shows coming up in Auckland. One is tonight, when Aussie nu disco king Dr Packer plays Impala.

And the other, on December 2 at Galatos, is massive. Andrew Weatherall is playing. Everything I have read and heard about Weatherall's recent shows says this will be an amazing evening. And it's not a big venue, so you'd best be getting a ticket.

If you're interested in how the music business is working, this week's World Independent Network Wintel 2017 World Independent Market Report is a good read. It confirms that overall recording revenue is growing again – and also indicates that independent companies' share of that revenue increased slightly in 2016:

It is entirely down to streaming that the global recorded music market enjoyed its second consecutive year of growth (5.9%) in 2016. Prior to 2015 it had endured 15 years of decline.

Measured in isolation, streaming grew 60.4% in 2016. It now accounts for 59% of all digital revenues, whilst digital as a whole now accounts for 50% of the total market.

Given that it looked for a while that the three majors, who have not been shy about using their leverage in negotiating digital revenue deals, would shut everyone else out, this is significant. It's also important to note that all these figures are based on rights ownership, not who distributes the recordings.

Also worth a look: Digital Music News has a look at who pays what in the streaming world. We already knew that YouTube offers the highest number of streams and the lowest rate per stream – but it's something of a surprise (or an irony) that the best deal for rights owners comes from the revamped Napster. 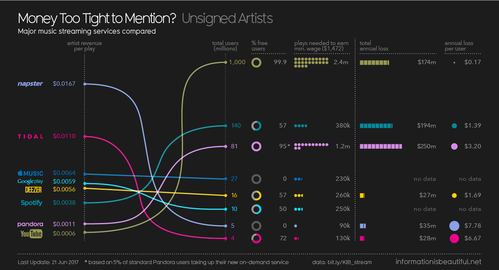 The chart – there's a big version at the link above –  also includes available information on which services are losing the most money (none of them are actually making money). Indeed, for Google and Apple at least, losing money is part of the business plan. It's a fucking brutal business to be in for that reason.

Julia Deans has a nice new Greg Page-directed video for 'Walking in the Sun' – which also happens to work as a brilliant showcase for Julia's Tanya Carlson wardrobe.

95bFM's Out on the Freak series aims to get the station's brand – and music – out into parts of Auckland where the kids are listening but don't usually have the chance to grab a hold of anything. Here's SWIDT doing 'Stoneyhunga' at a free, all-ages gig outside the Onehunga Community Centre. If I was 15 years old and got to see this I think I'd remember it for the rest of my life:

This forthcoming documentary on the birth of Detroit techo looks like it's going to ruffle some feathers ...

I haven't delivered much in the way of freely downloadable dancing gear of late, but I'm fixing that right now. This Petko edit of the Dennis Edwards classic just dreamy:

Mark Rae keeps on delivering. This "acid hip hop" tune is a banger:

I have no idea what Shanty Town this might be the theme from, but it's some proper disco delight:

And a very nice house tune ...

Again, all these are free downloads, requiring various degrees of mucking about with Hypeddit. Worth it, I reckon.