For the past two or three years She's So Rad have been moving adeptly between two identities: the lush shoegaze outfit and the game console disco version of 'Breakout'. Their long-awaited second album Tango, out today, goes some way towards reconciling their many styles.

The oldest track here, 2012's bursting 'Confetti', sits alongside 'Say the Word', with its David Dallas rap. But I think it it's also a showcase for Anji Sami's role in the group. If their debut, In Circles, could have been taken for a Jeremy Toy studio project, Tango is absolutely the work of a band with two songwriters. Sami's cascading 'Cool It', with its mad Brian May lead break from Toy, is one of my favourite songs of the year and it's far from the only great thing here.

That's available now on Bandcamp (along with the option for a limited-edition hand-numbered CD), on iTunes and via Spotify. And they're playing an album launch show at the King's Arms tonight.

The Other Crate Record Fair is on tomorrow from 9.30am at Allpress Gallery, 8 Drake Street (by Victoria Park Market) and it has a slightly different angle this time, centering on curated selections from the crates of five local DJs: Sir-Vere, Stinky Jim, Dbhead, Selecta Sam and Average White DJ. Jim has put together some words and pictures about what he'll be offering up.

But it's the name that's not on the poster that might get a few folks excited. The great Nigel Horrocks is letting go some of his jazz collection. Whoop.

A bit of Friday fun. Some of the folks at Music 101 have been musing over a potential New Zealand Music fantasy First XV and Zen Yates-Fill has had a crack here. I'm not sure about some of his picks – and even his colleague Samuel Flynn Scott is emphatic that there are too many small folk.

Strong and skilled with a long history of playing together. The Nonu-Smith combination of this team

Shayne's dalliances with the round-ball game set him in good stead as a pivot. Stylish, tough and, importantly, popular with the ladies.

What do you want in a halfback? You want fast hands, that's what.

More mobile than he looks – it's all the golf – and absolutely the guy you want calling it from the back of the scrum.

Tall, athletic and creative – and always a lineout option. Handily, already has the number.

The Luke Romano role. Good-natured off the paddock, an enforcer in the tight.

Busy around the fringes, but also a surprisingly strong scrummager.

A thinking loosehead. Disruptive at scrum-time, more than useful around the track.

Over on Audioculture, Andrew Schmidt tells the story of Sweetwaters in two parts: Sweetwaters on the rise - 1980 to 1982 and Sweetwaters on the wane - 1983, 1984, 1999. Included is this Murray Cammick pic of everyone's favourite security guy, Alby, who if memory serves me correctly, was a former traffic cop. 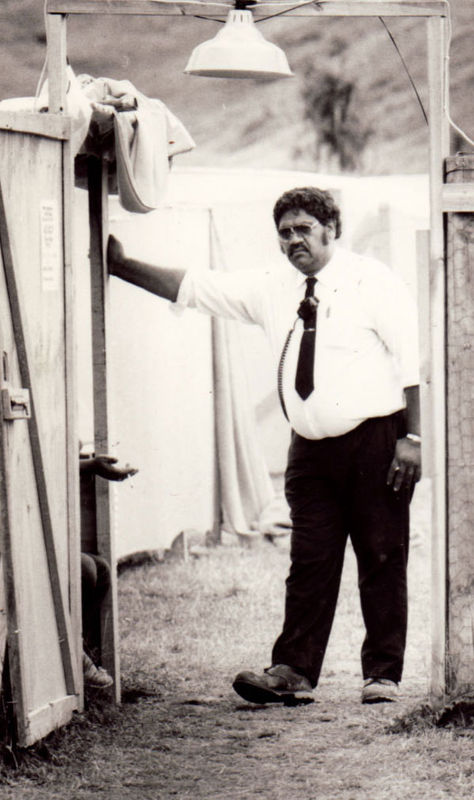 Andrew is also the author of a very welcome profile of Bruce Russell.

Another good read: Twelve Questions with Ashley Page, who got the top honour at the Music Managers Federation awards this week. It ranges from how his dad Larry fell out with Ray Davies to how he came to manage Joel Little.

And Spin runs a bunch of tunes (including 'Pink Frost'!) past UMO's Ruban Neilson, shedding light on his musical soul in the process.

And one from the video crate: NZ On Screen has the lovely Gemma Gracewood-fronted ukulele doucmentary Bill Sevesi's Dream.

There's quite a bounty of tracks this week. Notably, Boycrush is back with a new tune (free download!) featuring Madeira (aka Kim Pflaum, formerly of Yumi Zouma). The drums are louder than they were on his debut EP Everybody All the Time;  it's lush, light and delicious pop with a groove. From the Girls on Top EP due for release on May 27.

The guys from Rocknrolla Soundsystem are back with another brilliant edit. Aretha's 'Chain of Fools' is right in their mid-tempo sweet spot and they don't miss. There are many pointless edits in this world. Here's one that picks up the spirit of the original and finds some new places in it. (Click through for the link to a free Bandcamp download.)

'Bohannon' isn't just the name of a track on the last Fat Freddy's Drop album. It's also the stage name of cult disco producer Hamilton Frederick Bohannon. This remix (free download!) doesn't stray too far from the drowsy blues of the original.

It's an age – nearly a quarter century – since Tracey Thorn released A Distant Shore, an album with all the wistful melacholy of a seaside town in winter. And now she's returned to that feeling with an EP of songs composed for the soundtrack of Carol Morley's film The Falling. She plays all the instruments herself and the recording of each was a first take in the studio. There's a Rolling Stone interview here. And here's one of the tracks:

Over at TheAudience, fuzztone fun with Auckland three-piece Heroes for Sale:

An eclectic, unexpected new mixtape from the corporate HQ of the Young, Gifted and Broke collective:

And finally, most people were working in New Zealand when the webcast of Prince's Dance Rally 4 Peace in Baltimore went out, but a recording of part of the show is up. Note that at 37:18 he eases into a seriously funky (no, really) version of the Waterboys' 'The Whole of the Moon'. (Hat-tip to David Bishop for that.)