The debut album from @Peace was largely about the big questions of identity and existence. The follow-up, Girl Songs, seems to be about, well, what it says on the label. Which doesn't mean that Tom Scott isn't still over-thinking, over-sharing and over-achieving. The preview single, 'Cake', is the internal monologue of a young man subject to temptation. It's about vulnerable as hip hop gets:

'Cake' is on name-your-price (including zero) on Bandcamp and Girl Songs will be released on (sob) Valentine's Day. Here's the cover: 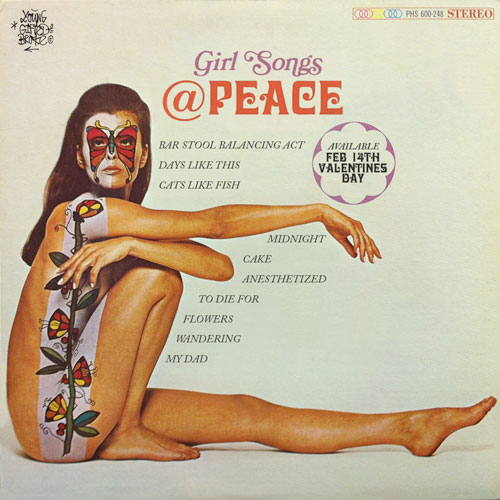 Last month, several of my Media3 colleagues and I celebrated the end of another year's steely-eyed, analytical broadcasting by going to the pub. Specifically, to the King Arm's Tavern, where we saw several fine bands, including Voom, who just never get old. (I'm sort of serious -- Buzz Moller actually does not appear to age.) I didn't know at the time that they had a new song. I mean, this is a new song, right? I just found it bobbing around in the nether reaches of the "unreleased" chart on TheAudience:

I would very much like to be able to offer some coin for this song.

I really like this -- and I've grabbed it as a free download from their Soundcloud page. (There are also other releases for sale on Beatport.) Just by the way, Perverse have more than 6000 followers  on Soundcloud.

That's a free download -- and there are also two Totems EPs on name-your-price on Bandcamp.

"Auckland's going through one of its hibernations," declares a morose, baby-faced Colin Hogg. "But it's not showing much sign of waking up this time ... I don't think there's much out there to get excited about."

The premise of this 1984 Radio With Pictures special, fronted by Simon Morris and published on NZ On Screen as part of an Auckland Anniversary Weekend collection, is that the town's down, musically, and it can't get up.

Which is odd, because by the time we've been whisked around a succession of venues -- including The Venue, whose proprietor, a Mr Russell Crowe, seems in  good form -- Auckland looks perfectly okay. As Doug Hood points out, he's just pulled 700 people to Mainstreet on a Sunday afternoon, albeit with "four Dunedin bands".

Anyway, this is a great watch for anyone who was there at the time, or who wants to see how their parents partied. (I was deputy editor at Rip It Up and I dimly recall having quite a good time in 1984.) Faces include nightclub impressario Mark Philips and an impressive Graeme Humphreys (aka Hill) with an early Able Tasmans lineup.

The odd thing is how poorly-identified everyone is. I wondered whether the TVNZ Archive had provided the master tape rather than the captioned broadcast version. NZ On Screen's content director Irene Gardiner told me she had the same thought -- but apparently this is how it went out.

PS: This is actually a North Island music special, not just Auckland. On the weekend that Morris covers Wellington, the two big shows are ... the Topp Twins and Freudian Slips. The capital seems to dwell somewhere between Sarajevo and satire.

"Not everyone's into rock music any more," explains a young Gary Steel, who looks like he's about to faint from hunger, "A lot of the musicians are now involved in drama, theatre, cinema, art, whatever."

The strongest signs of life, people agree, seem to be coming from the Hutt Valley, with its unpretentious heavy metal bands. And so it proved to be. Strikemaster didn't crack it big -- but it wouldn't be long before some kids formed a little band called Shihad.

Righto, that'll do you all. I'm getting my things together for Laneway. Expected highlights? Street Chant, Bailter Space, Real Estate, Phoenix Foundation and big time, the closing acts on the small stage, Flume and Nicolas Jaar. I'm fresh in love with both their albums. Here's Flume live last year:

I hope and trust there will be proper provisioning of bass.