It's the season of Christmas drinks, and after a little industry chat at the NZ On Air function on Wednesday night, a few of us moved on to Cassette Nine, for 95bFM's much noiser Christmas do. I particularly enjoyed catching the set from PCP Eagles, a band with whom I'm not otherwise likely to cross paths.

I got some good video of the melee -- which was unexpectedly eaten by my phone when the Camera app crashed the next morning. The video appears to be goneburger. That's never happened before. But here's one the PCP Eagles prepared earlier:

And a little robust live action from another bFM event, earlier in the year:

So they're a punk rock band. A bit California hardcore with a little metal and the poppy flavour of the Ramones. I dunno, it's not my specialist area by any means. But I fucking loved the exuberance of both the performance and the crowd's response.

And by golly, they can play. Tight, tensile, riffs of steel. That's the difference between the nascent punk of my youth and its musical descendants -- people can play now. Thirty-odd years ago, I don't think there was anyone who could play guitar like Emily Littler of Street Chant does now -- and probably no women who even aspired to.

Which is not to say that one is any better than the other. Naivete creates openness, and the kids who flailed away at instruments thirty-odd years ago were to some degree inventing the music they played.

Happily, Audioculture has just published some remarkable images from those early days -- all taken by Fiona Clark in one night at Zwines -- along with a text by Simon Grigg. The band that night was the Idle Idols, of whom Simon says:

The Idle Idols were conceived by Auckland artist Paul Gibbs, the only male in the group. He gathered around him some of the most extroverted young women in a scene known for its extroversion. Could they play? It didn't matter – it was about the look and the concept and on both those levels they pulled it off with absolute panache. 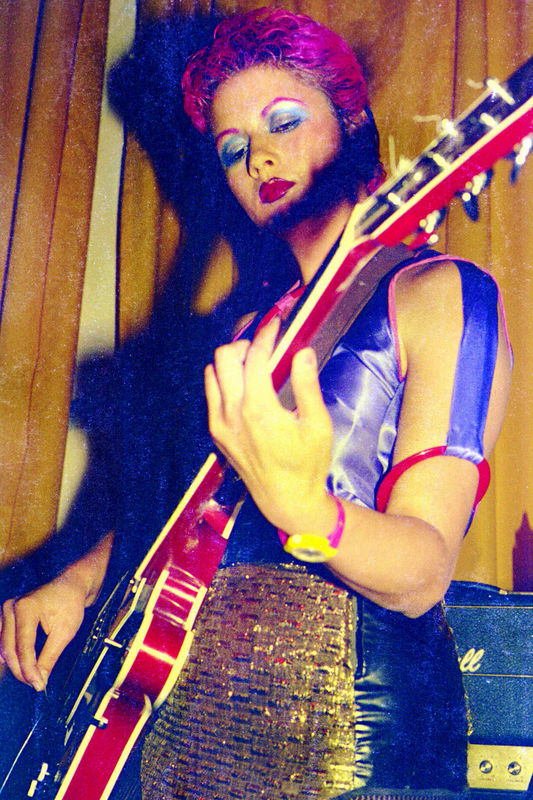 Also on Audioculture, Andrew Schmidt has more tales from that era, in an article about The Scavengers centred on the notorious 1978 Eyewitness report that alerted middle New Zealand to the presence of punk rock in its midst.

In a wholly different vein -- but certainly exuberant --  there's 'I'm In Love With Jesus', a self-released single from some young folk at the Arise church in Wellington, which is in the New Zealand Top 20 this week:

Ha ha, you've got a Jesus earworm now. You're welcome. But, y'know, good on them. And that video certainly does make church, in the great tradition of forming bands, look like a great way to meet girls.

On TheAudience, there's The Conjurors, a psych-soul outfit formed and lately revived by man-about-town Matthew Crawley out of (with the exception of Gareth Shute) the lead singers of other bands. Here's their new tune:

They're playing a very short South Island tour, beginning tonight at the Wunderbar in Lyttelton and finishing tomorrow night at Chicks in Port Chalmers.

Tomorrow night in Auckland, meanwhile, there's something pretty special. The Flying Out Jangle All the Way Christmas Party at the King's Arms presents a lineup that includes two versions of the Verlaines, years apart. That's the current lineup and the one -- Graeme Downes, Jane Dodd and Robbie Yeats -- that made the Verlaines' debut album, Hallelujah All the Way Home, which has just been re-released on vinyl. I heard 'Lying in State', one of my all-time favourite Verlaines songs on the radio this week -- damn, it sounded good.

And there's more. Trick Mammoth are playing! They sound like this:

Advance tickets are $15 from Under the Radar.

Righto. After last week's epic (feel free to go back and listen to and download all the great local music in the list curated by Lorde) I'm easing back a bit. Enjoyment of your weekend may be aided by this epic 16-minute remix of the Creative Source/Bill Withers classic 'Who is He and What is He to You?':

Be selective, be objective. Be an asset to the collective.