I've written recently about the welcome attention that Lorde's remarkable success is bringing to her musical compatriots -- and the happy fact that there currently is actually a bit to show the world.

Broods, the new project for Lorde's production and writing partner Joel Little, signed a record deal this week, with Capitol Records in the US and Polydor in the UK. They'll deliver a debut EP in February and album in August, both produced by Joel. It's a big deal -- and it would clearly have taken a little longer had they not shared a collaborator with the new pop superstar.

Lorde herself helped by bigging up Broods' debut track, 'Bridges'. But what else does she like the sound of? Well, that's what I have for you today.

This list has a bit of a history. I came up with the idea of finalists' New Zealand music playlists for the Vodafone New Zealand Music Awards programme, but Lorde's was just too cool: only one of her six tracks was available via awards sponsor Spotify. I'm not thus constrained, so I've solicited another couple of tracks to make eight and embedded them here as they've been available.

There's a distinct theme to this playlist: solos, duos, super-confident teenage bedroom producers. I asked Lorde about her choices and what she made of the kind of artists coming through. She said:

"I was so stoked on the success of Broods recently - Caleb and Georgia are both super-talented. She's always been a wizard with melodies. Fffrrannno's been working away quietly making lovely jamzz, and I'm just in awe of Eddie, Daniel and Sam.

And here are the tracks. You can own them all, one way or another.

Doprah, 'Whatever You Want'

You can buy that track on Doprah's self-titled EP for a price of your choosing on Bandcamp.

Miguel, 'Do You (FFFRRANNNO Bootleg Refix)'

To be clear, Miguel's an American R&B artist and this is a reinvention of on of his hits by FFFRRANNNO. There's a free Dropbox download of that for you here -- and on TheAudience, a couple of tracks and an  interview with the artist by Dean Campbell.

Race is 16 year-old Wellingtonian Eddie Johnston. You can read Martyn Pepperell's TheAudience interview with him here, and check out his profiles as Race Banyon and Lontalius (See also another Pepperell interview for Vanguard Red). This year's Race Banyon EP Whatever Dreams are Made Of is here on Bandcamp, and Lontalius's collection of tiny songs, The World Will Never Know About Us, is here. Both are name-your price.

Another teenage bedroom producer: in this case 17 year-old Sam Perry. You can hear more tracks and get all his other links at his profile on TheAudience.

Daniel McBride won this year's VNZMA Critics' Choice Prize -- and showed with his performance on the night that he's no bedroom-bound introvert. A multi-instrumentalist who switches from bass to to sax to voice to a nice line in stage patter, he seems to have it all going on. The Ablutophobia EP is from 2011. You can also check out this year's dense, complex album, Egospect on Bandcamp and a profile on TheAudience.

This is one hell of a "hello" to the world. Still a free download, because why not?

Zacho Fraser, '2Track/Material of My Own'

You can read Zacho's explanation of the track here, and get a free download on The Audience here.

That's on the new Portals EP, which you can buy here on iTunes, or here on Amplifier. Or, get the song on its own for a dollar on Bandcamp.

I really enjoyed writing the new Able Tasmans enty for Audioculture, not least because it brought back some fond memories of living and hanging out at the house in Marlborough Street, Mount Eden, with Graeme Humphreys et al. Which is why I've picked this pic from the page to represent it. 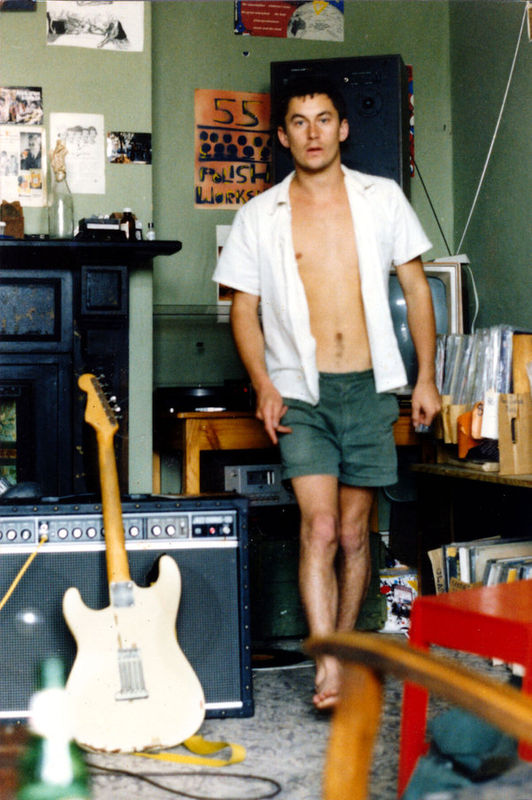 Just behind Graeme is our old black and white telly, the same one on which we watched the live telecast of David Lange's Oxford Union speech. On the wall, you can see a poster for 55 Polish Workers, of whom Anthony Nevision, later of the Headless Chickens, was a member. Ant had my room at Marlborough Street before I did. One of the odd things about the house was that, having been split into two dwellings, it had a bathroom-toilet right in the middle. The ceiling went all the way up to a skylight at the epx of the roof. The applause from games at Eden Park would drift across the rooftops and down though the skylight's vent. If you happened to be there doing your bsuiness when a wicket fell, it was hard not to feel that you'd done particularly well.

Also new, and from a similar era, Simon Grigg's profile of Russ Le Roq, aka Russell Crowe. Russ would come up to Rip It Up every month with his listings for the gig guide, sometimes in his canary-yellow zoot suit. Like most people who dealt with Russell, I liked him, admired his work ethic -- and was quite mystified by what he thought he was doing. His music, frankly, was awful.

Matthew Bannister's One Man Bannister band -- the live expression of Evolver, his fab cover album of the Beatles' Revolver -- comes back to Auckland tonight with a show at Golden Dawn. Support will be from the Changing Same (playing Matthew's own songs)  and The Honeywine Stones (aka Matthew's bandmember Paul Methven).

In keeping with Matthew's penchant for family-friendly hours, the first act will be on about 8.30. And guess what!? I have a double pass to give away. Hit the email link at the bottom of the post and come at me. I'll draw it early afternoon.

Tomorrow at Golden Dawn is pretty cool too. Timed for Ponsonby Road market day, it's the third New Zealand Soul All-Dayer, noon to 1am. Peter McLennan has all the details. Note that there's a swap meet and market -- you can turn up with your own vinyl, or just browse the stalls.

Speaking of vinyl, Flying Out has rounded up the year in Flying Nun and ArchHill releases. Get in now in time for Christmas.

It was cool of Bruce Springsteen to include The Saints' 'Just Like Fire Would' in the sets on his Australian tour this year. And now the news comes that he's recorded it for his new album, High Hopes, which is released next month. The Boss is a Saints fan, describing them as "one of my favorite early Australian punk bands" and recommending that his fans check out I'm Stranded.

Here's a clip from the first time they played it, in March in Brisbane.

If anyone deserves a payday, it's Chris Bailey.

In other rock news, Noel Gallagher has given a really fucking funny interview about the state of pop music to Rolling Stone.

Time for the tracks!

The young Wellington hip hop artist Name UL has had several tracks on TheAudience, but nothing like this epic new tune. It's got an A-Team behind it too - produced by Lee Prebble and mastered by Benny Tones.

Most striking local hip hop release of the year, I reckon. You can download the whole Summit EP free on Bandcamp. I sure did.

A swoony Christmas present from Watercolours and James Duncan:

The latest in a string of great remixes from Ladi6's Automatic album. Download it for free - or pay for it. Your call.

And this take on Dawn Penn's signature tune is a couple of years old now -- but some things just don't date. Sweetness:

And finally, I think I may have posted this before before. But I'm posting it again. Because it's awesome ...