Back in the old days, – and I'm talking the 1990s here, kids – we used to talk about "internet time" and "internet years" as an expression of how fast change could manifest in a low-friction, connected world. Every day, a crazy new idea, an old way disrupted and a fresh, flaky build of Netscape.

But more than once in the past decade I've reminded geek audiences that their sector has changed far less quickly and precipitously than some of those they like to mock as dinosaurs. Trust me on this, I'm a journalist.

Further evidence: this week's figures from Recorded Music NZ, showing that in 2016 streaming accounted for half of recorded music revenue. Three years ago, when Pure Heroine came out, the figure was 7%.  Lorde's second album will earn its keep in a very different way to the first.

RMNZ hasn't released a breakout for local artists as opposed to the local industry, but I'll see if I can get that. It remains true that unless you're a creative director or a screen producer (in which case, sync local!), the best way to support local artists is to pay to get into their gigs and buy their recordings in any format. You could listen to nothing but local indie bands on Spotify and your money would still go mostly to Ed Sheeran and Drake. That's how this works.

My friend Mark Peterson, who has manned the sound desk at the King's Arms Tavern for the last hundred years or so, posted a Facebook live video of the unusual events at the bar last Saturday, when the council, acting on a noise complaint from a local resident, summoned a crew of police officers to close down a gig by visiting American doom metallers Windhand. He and dozens of his Facebook friends were understandably appalled.

The fact that the show was able to be summarily closed down, rather than turned down, was a matter of interpretation by noise control officers. They had issued a warning after a complaint about the gig the night before, and decided that the fact that another show took place the next night – as had been advertised for weeks – amounted to non-compliance. So they called in the cops and left with "a speaker and a mixer" to make sure no more music could be played.

In this Stuff story, the promoter who brought Windhand here slates the King Arms management, but I'm not sure that's fair. Even if venue management were aware of the council's interpretation (which isn't clear), what were they supposed to do? Cancel the show? And I'm also not sure that staging the gig earlier would have helped – the Saturday complaint was received well before midnight.

Look, we're in the midst of change in the Newton area. It was dense with housing until the 1960s and is beginning to be reoccupied. It was the emptying-out associated with the motorway junction that created the space for a live music venue to operate. The pub itself has been sold for residential redevelopment and will close down next year. But it would be a shame if this storied venue's life ended with a whimper.

And really ... dear resident, if you didn't want to live near a live music venue, you shouldn't have bought or rented a place next to a live music venue. The KA has spent more than $100,000 on sound mitigation over the years and, frankly, it's not really that loud outside. Some people should stick to the suburbs.

There is a petition calling on the council to protect the future of live music in the central city and I think that's an entirely reasonable request. A city full of flash pads and empty of culture isn't much of a city at all.

UPDATE: Helmet’s promoter has pulled their show out of the King’s Arms and moved it to Galatos, understandably unwilling to bear the risk of the council shutting it down on the night. This is really sad.

Whoa. Turns out that shitty Pepsi ad was anticipated 18 years ago by the video for the Chemical Brothers' 'Out of Control'. And the original director, W.I.Z.  was frankly appalled to see satire become reality:

He explains the video was originally inspired from a lyric from The Clash’s ‘White Man (In Hammersmith Palais)’, “Huh, you think it’s funny turning rebellion into money.”

The video, which he calls a self-fulfilling prophecy, was meant to show that nothing is sacred when it comes to profit margins, “not even heartfelt expressions for social justice.”

If you're out on the town tomorrow night in Auckland, there's a lot to see: Nadia Reid at the Tuning Fork, Delaney Davidson at Freida Margolis (actually, that's sold out), Ijebu Pleasure Club at the Portland ...

And, yes, a bunch of rascals young and old at the King's Arms for Punk It Up. Please don't let this be closed down. Please. 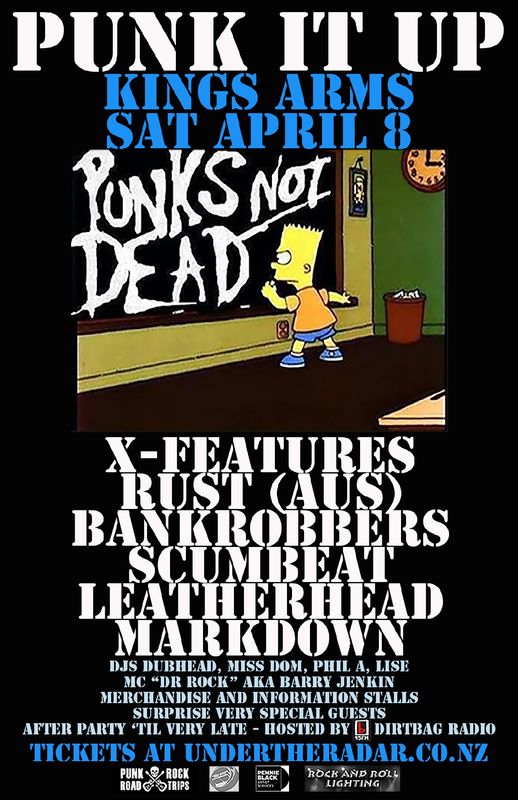 Me? I'll be dancing in a forest at Oro Festival.

I posted a couple of things from the Parisian DJ Florent F recently, but I don't think I shared this, which I've been loving. Hit that free download button!

And one for the wedding DJs! A pretty cool rework of 'Grease', with the drums brought to the fore. Click through for a free WAV download: