Firstly: Kim Dotcom did not "admit to hacking" at the Internet-Mana campaign launch today, as both network news shows claimed this evening.

His "teenage hacker made good" story is Dotcom Bio 101. It's on his Wikipedia page. It was traversed extensively when he was a witness in John Banks' court case this year. It's been part of his stump speech at every stop on the Internet-Mana roadshow. You can basically read exactly what he said today in the Southland Times' report on the coalition's Invercargill stop two weeks ago. The point he makes is that he accepted a business development loan from the government, went straight and was very successful.

The idea that Dotcom made a big reveal in saying it again today is ludicrous. I didn't take the reference to John Key ("another Prime Minister I don't like") as implying that Dotcom was involved in the hacking of the Whaleoil site. No one around me seemed to. He'd probably do better to leave out the digs at Key (twice, I think) altogether.

Secondly: The job of press secretary is one of composure, even if it seems the journalists are being annoying or even malicious in their angles. Anger, be it necessary, should be left for when cameras are not rolling, mics are not live and people are not listening. Pam Corkery's meltdown at One News' Michael Parkin was ruinous and unprofessional.

I suppose there will be reasons why Corkery, who is the press secretary for Laila Harre only, was running interference for Dotcom, but having him do a runner and her do her nana was never going to work.

I gather Dotcom wasn't doing interviews in order to focus attention on the coalition's policy announcements -- aspirational goals would be fairer -- on "the right to work" and full employment. It didn't work out that way. Basically, if John Key is expected to talk about things he really doesn't want to talk about at his campaign launch, then so is Kim Dotcom. Deal with it as best you can. Your job is to prevent this sort of clusterfuck, not provide it.

Thirdly: I really, really don't think Dotcom is @whaledump, as Parkin suggested in his report. Whaledump projects a very different personality and seems more likely to be part of a wider circle of IT-savvy people who knew the late Judd Hall and were incensed by Cameron Slater's vile description of him as a "feral". We also now know there's another "hacker", in contact with David Fisher, who seems to have logs from the Whaleoil website.

Fourthly: I dropped in for a look with my son and a friend of mine, because we live around the corner. Like all the other people inside the Western Springs College hall, we were unaware of Corkery's confrontation with the the press. What we saw -- and I presume it reflects the rest of the roadshow -- was more Mana than Internet. Almost every word spoken and sung for the first 20 minutes was te reo Maori: a karakia, a waiata ('Whakaaria Mai') and a kapa haka group.

Mana's Ikaroa-Rawhiti candidate Te Hamua Nikora was a noisy, entertaining MC, and King Kapisi and former Warrior Wairangi Koopu spoke in fairly entertaining vein before Dotcom was introduced to the strains of  'Eye of the Tiger'.

Harre (introduced with Joan Armatrading's 'Drop the Pilot') focused on education (free, and they promise to erase student loan balances) and employment. But was Annette Sykes, sounding more the firebrand activist than the prospective MP -- who got the bigger response from the crowd when she set herself against the neoliberal revolution and promised to reverse recent privatisations. She spoke instead of Hone Harawira, who arrived but took a back seat because of of injuries suffered in a car crash this week.

The crowd? Varied, in age and ethnicity. The urban liberals on the Internet side might not subscribe to quite the same views as the old-school socialists, who might not be on exactly the same page as the whanau present (there were lots of kids). The whole thing was an odd but quite happy blend of old-fashioned people politics and too-cool-for-school branding.

It was so hot inside (seriously, it's August- what's that about?) that I'd withered after about 90 minutes and we made our way out, with no idea that anything untoward had happened. I'm not sure how much we missed, but I felt due for a beer on the deck at home.

It had been an intriguing affair. And it would be fair to say that when I left, I did not see the evening news angle being what it was. 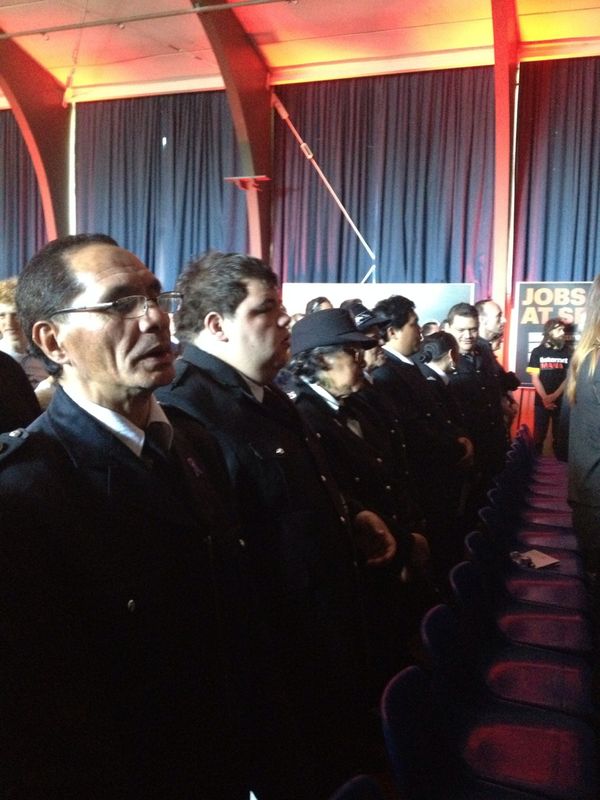 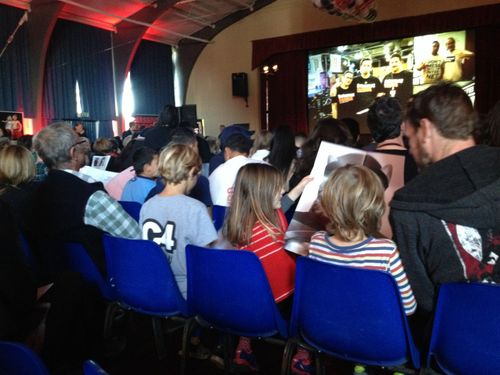