In the newspaper on the weekend, Herald columnist and editor of The Spinoff Duncan Greive asked whether TV is dead.  Actually the only question was found in the headline – “Is this the death of TV?” as the subheading answered “television has lost out to the Internet", then later, “television’s not coming back”.  (The same article on The Spinoff is titled “Good News: TV is dead”, which confirms what some have long suspected about many TV reviewers and their feelings towards the medium).

A week or so ago, I was at the release of the New Zealand on Air audience survey information.  It was certainly interesting reading, and as Greive notes, for the first time, television as a medium has been overtaken by the Internet.  Well, sort of.  On a weekly basis, TV still reaches more people than online video. 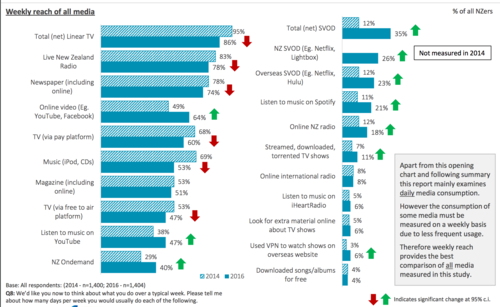 On a daily basis it’s the opposite, at least for younger people. 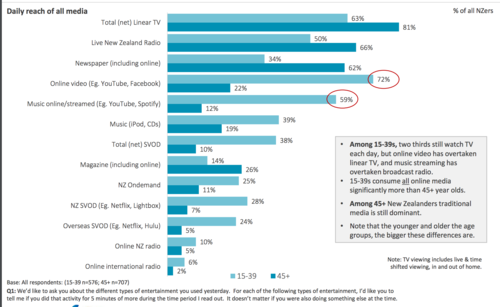 But this argument is overly simplistic.  Television vs the Internet.  These are just video delivery mechanisms.  TVNZ, YouTube, Facebook, Stuff, The Spinoff – these are platforms, under which in some cases there are channels, on which there are programmes.  Bear with me if this seems obvious, I’m getting to a point.  Back to the NZOA data though, here’s how a channel by station by site comparison looks. 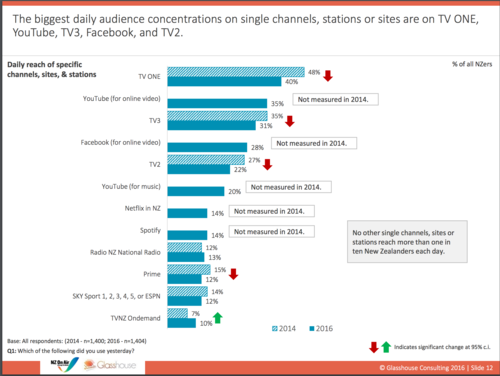 Things are changing, that much is also obvious.  Even in the decade or so I’ve worked in television, the numbers have dropped.  What used to be an average rating for a show would today be an unbelievable win.  Prime time shows on major channels are now content with getting the eyeballs of a single digit percentage of the total population – few shows get into double figures.  “Wins” are now counted by looking at Share: Did our show get a bigger share of whoever’s left watching television than the other lot did?

The problem is, “television has lost out to the Internet” is a false dichotomy. As much as its streams are broken down into mechanisms, NZ On Air doesn’t fund ‘television’, it funds programmes. And while I’m sure everyone reading this loves niche programming, one of the legal requirements (s39(b) of the Broadcasting Act) is it must take into account the potential size of the audience.

So instead of simply saying “let’s give all this money to the Internets”, what programmes would you fund, and where would they go to reach a large audience?

The most obvious places to start would be nzherald.co.nz or Stuff.  Huge daily reach.  And while inroads are being made – I’m looking forward to seeing Kirsty Johnston’s doco series filmed in a South Auckland school – people aren’t yet going to those sites to watch non-news video, at least not in any reasonable proportion to the ostensible audience size.  There has been the odd exception – I’m *told* Anika Moa’s interview series hit 100,000 on some episodes, which will be more than it’s likely to ever see on Māori Television (I hope I'm proven wrong, but even the award-winning Native Affairs peaked around 20,000 viewers), even with a name change.

Ratings for most video views aren’t published like television, and it's commercially sensitive, so it’s hard to go on anything other than anecdote and conjecture a lot of the time.  But the figures I have been privy to are almost always underwhelming.  So while television is declining, there’s still a gulf between most mainstream TV audience numbers, and most New Zealand online-only video content.  One episode of One News last week got a 17 in the 5+ demographic.  That’s 730,000 viewers, if you believe the system.  Westside, on TV3, 200,000 for one episode, on television - i.e. not including On Demand.  13,000 people watched my old show Back Benches last week.   That’s niche TV right there, we always knew that.  But even to reach that niche figure you’d have to combine the audience from the last twenty videos from The Spinoff (assuming no overlap on any of those videos).  The places people go to read, and the places people go to watch, are often not the same thing.

So where are the big online video audiences?  VOD, perhaps.  It’s worth noting that some content made for broadcast television ends up there too (and sometimes on YouTube as well) - and maybe having a solid plan post-broadcast should be an important part of funding from now on.

There are some YouTube channels with a huge reach – but take away the make-up demonstrations and gamer content and the field narrows considerably – or fund them and watch the outcry.  Notably in announcing a new partnership with YouTube, NZ On Air has specifically excluded ‘demonstration’ or ‘lifestyle’ videos.

Things do need to continue to change, and having watched the development of NZ On Air’s digital funding, change has been the only constant.  There have been early mistakes, adjustments, and increases in the amount and types of funding along the way.  And most recently, that shots across the bow to television networks – if someone else can offer the eyeballs, then we'll give that television funding to someone else.

[Comments are closed for this discussion - take it to Twitter, folks.]