After three days in London, I saw the sun. And Lo, all was good in the world. A crisp cloudless winters day was, to quote an Eels’ lyric, Novocaine for the Soul. And it provided a wonderful backdrop for my long but leisurely walk from the Tate Modern, across the Minnellium Bridge, past St Paul’s, Picadilly Circus, Covent Garden, Carnaby St, Soho and Oxford St.

It was a bloody long walk actually. But after three days, all I’d seen were the little pockets of activity surrounding various tube stations. I figured in a city of eight million people, there was bound to be something between those stations. It took a few hours, much of which was spent consulting my mini A-Z or bewlidering passing locals who had no idea why I’d possibly want to walk when there was a tube station just over there, innit?

It certainly helped with my geographical bearings. Previously I’d been puzzled why the West End was in North East London. It’s not. Then again, I always thought Oxford was South of London, in non-existent lush part of Southern England. But don’t tell them I said that.

I’d like to say the day’s highlight was the Tate, but the sad reality is I was happy as a geekboy at Epic Heroes, two storeys of pop culture merchandise, from Star Wars to Simpsons, Russ Meyer’s erotica to the Matrix.

Then I sampled store after store brimming with sneakers on Neal Street and the street fashion delights of Carnaby Street, where I bought a cool print by UK graf/stencil artist Eelus: 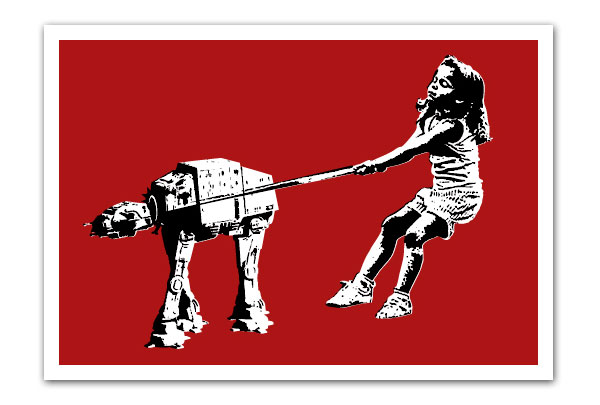 I’m liking the big city, even though (or maybe because) I’m haemorrhaging dollars like there’s no tomorrow. And in London it’s always possible there might not be. In the South Pacific you forget – or at least I do – that the Iraq war is not just about America and Iraq. Oh no, England’s up its armpits in that little conflict. So, understandably for a nation at war, it occupies quite a bit of the media.

I use the word “Orwellian” far too much for my own good, but I can’t think of any other way to describe Tony Blair’s new “Respect” policy.

The Sydney Morning Herald sums it up pretty well:

The plan creates the power to evict anti-social householders and to "shut and seal" their homes for up to three months.

Extreme problem neighbours could be sent away to residential "sin bins", special units where they will be forced to stay and learn social skills.

Expanding existing programs, the Government will offer teenage parents £30 ($70) a week to attend parenting classes, force parents whose children are disruptive at school to attend classes on discipline skills and even establish a Parenting Academy.

Skills to be taught at parenting programs include getting up in the morning, how to pay bills and living together as a family.

What part of ‘undesirables’ being evicted and sent away to special camps for reprogramming doesn’t scare the shit out of any human rights fan? First they came for the yobs, and I didn’t speak up...

Is it possible God’s started

talking to Blair too

Getting Off at Redfern is old Sydney slang for Coitus Interuptus, Redfern being the last stop on the train before Sydney Central.

Without wanting to lower the tone completely, there's also a delightful (and hopefully self-explanatory) North Shore saying, "If the tide's in at Red Beach, head round to Browns Bay".

Anyone else have any public transport/geographical euphemisms they'd like to contribute?

I’ve arrived in Oxford today. Wish you were here.