Busytot is three! Although if he had a say in the matter that would read “Busybigboy is three,” because from his point of view, three is the official threshold of bigboyosity. He's at a point in his life where he suddenly has both a past and a future. All of his fantasy scenarios involving exciting jobs as astronauts and other people’s daddies and taxi drivers happened “oh, about three years ago,” and he’s already calculating what he’ll be eligible for when he’s ten. A bunk bed. A Beetle car. A New York City fire engine with a ladder on it.

Having twigged to the fact that both Mummy and Daddy are teachers (I teach big kids to write, and apparently Daddy “teaches big kids to play” – which will be news to the big kids currently enrolled in Mathematical Methods of Physics), he insists that he too is a professional pedagogue.

“I teach the little ones,” he clarifies. “My students aren’t same-sized as your students.” When I ask what, precisely, he’s teaching these students of his, he says “Pushing.” Er... really? “Yes, pushing, you know, pushing things, like door bells, buttons to cross the road, thing that beeps the car, all that stuff you got to do pushing for, because I’m quite smart about that sort of thing.”

Four years off the age of Reason (four more years!), he is also halfway through that mysterious correspondence degree in Law that all toddlers take in order to torture their parents. And he’s double-majoring in Philosophy, currently slogging through Why 101.

The universal Why appears to be hard-wired into the human brain, a sort of deeply instinctive Tourette’s-like anti-Socratic method in pursuit not exactly of understanding, but of the point of maximum absurdity. Once he’s launched on one of his infinite regressions down the path of Why, you have no choice but to hang on and ride it out.

It’s easy to miss the turn-off, and find yourself down some gravel road in the middle of nowhere arguing an increasingly non-winning position. These either involve the sort of cosmological questions about the universe that Busytot’s Dad is paid good money to work on, or alternatively, some kind of toilet talk.

The latter usually happens when I inadvisedly vent out loud about Bush talking on the radio, say, or a bad driver, or some obstructionist civil servant who’s just sent me to the back of the queue.

“Why that man a grumpy old bugger?”

“WHY HE NOT HAVE A POO TODAY?”

Once, just once, I tried turning the tables and answering a why with a why. Does not compute. I thought he would blow his top. “You not say why, I say why!” he shrieked, and while my ears were still ringing, he calmly returned to the subject at hand. “Why cinnamon bagels make my bottom hurt?” (It's OK, put down the phone -- we're not pastry perverts, he's just allergic to cinnamon).

Sometimes he gets ahead of himself too, which is what makes me think it’s hard-wired. He’ll slip a stitch.

“Why I can’t climb on the table with socks on?”

“Because you might slip off and break a leg.”

“Why I not go to hospital in a ambulance going wee-oo-wee-oo?”

“Wait, who said anything about an ambulance?”

Wind him up and watch him go.

But although the lad speaks in increasing complicated (and contentious) sentences, he still indulges in a literalness that, to my ears, is as literary as anything on the Booker shortlist. He really really really likes rectangles. "Also bluetangles, and greentangles, and lellowtangles..." Synaesthesia is his middle name, and now I too can't see anything "redtangular" without a haze of colour around it.

There is something Joycean about his word for the oil-fired radiators that keep the house warm: they’re radi-heaters, of course. And when I corrected his mention of the “rain-pipe” outside the house, he looked at me with pity. “I call it a rain-pipe, because it’s where the rain goes.” He’s even experimenting with humour. “Does that make sense?” I ask him, and he solemnly replies, “Yes, it does. It makes three cents. Hahaha, I only joking.”

And politically, I think he’s a Democrat. Remember how in the third Presidential debate, John Kerry argued for a more amorous approach to, er, international affairs (in uncharacteristically Bush-like language)? The Kerry Doctrine: "Frankly, I think we have a lot more loving of our neighbor to do in this country and on this planet."

The Busytot Doctrine, cooked up on a late-night drive down the highway as all good political platforms are: “I love everybody in the entire world.” Happy sigh. “You know where the entire world is? It’s over there, behind those buildings.” 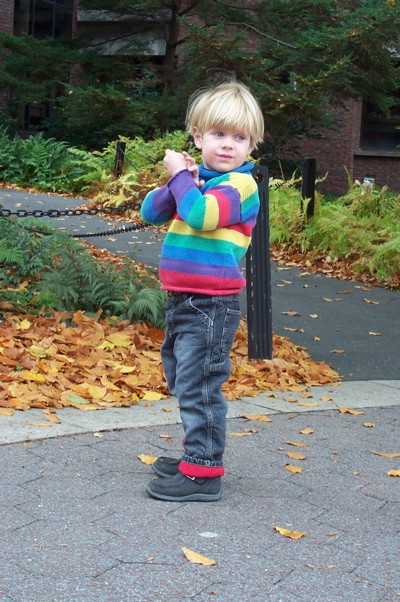