She died a century ago on 28 November 1918 in the influenza epidemic. Doctors were in short supply during the war and she had worked around the clock helping influenza victims until it took her too.

Born in 1873, at 20 she was too young to vote in the first women’s suffrage election on 28 November 1893 (another anniversary to mark this month) when the voting age was 21. After becoming the second New Zealand woman to complete medical school, Margaret joined a practice in the Canterbury town of Waimate.

My grandparents asked her to be the godmother to their second daughter, my mother, born there in 1917. But 18 months later she died helping others and in 1923 the citizens of Waimate erected a statue to honour her. I have a letter she wrote about her Christian faith and how it could be tested at times. She never married. 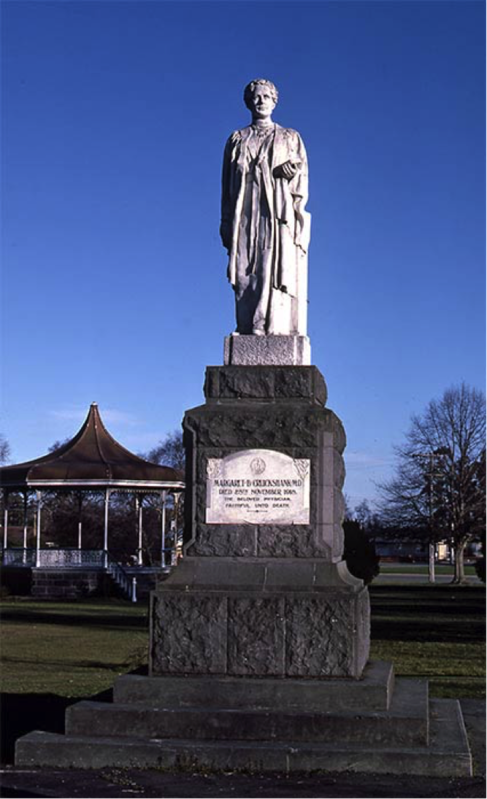 I have a tenuous connection to another flu story. In early November 1918 the SS Talune transported the flu from Auckland to Samoa, Fiji and Tonga – with disastrous effects. Even though there was sickness on board only American Samoa refused the ship entry.

In Samoa, it collected a young family on their way to live in Wellington. The father was a member of the NZ Expeditionary Force which in 1914 had claimed Western Samoa for New Zealand from Germany; the mother was a local woman of Samoan, Tongan and German heritage. She was pregnant with her second child and her baby daughter was 14 months old. What a terrible trip it must have been as most on board got sick including the crew and the father.

By the time the family settled in Wellington most of the mother’s family had died along with a significant proportion of the Samoan population. Grief and anger towards New Zealand and its neglectful governance fostered the growth of the Mau independence movement and led to the 1929 Black Saturday deaths. In 2002 Prime Minister Helen Clark apologised to Samoa.

In Wellington’s Karori Cemetery there are about 660 identified flu deaths in November and December 1918 and many more died throughout the Wellington region. At its height, dozens of people died each day. It is estimated up to 50% of the population could have been infected although most survived and many had only mild symptoms. Altogether, about 9000 people died in New Zealand in only eight weeks, compared to 18,000 deaths of New Zealanders in 4 years of war.

Future Prime Minister Peter Fraser was elected in a byelection in Wellington Central on October 3, 1918. Along with several of his Labour colleagues he had recently spent time in jail for opposing conscription for the capitalist war. Through his union networks he began to hear about illness on the returning troop ships that was much worse than the regular annual influenza.

Prime Minister Massey and his Deputy Ward returned from Britain via San Francisco on the Niagaraon 12 October and although there were sick people on board the ship was not quarantined. It is now thought that the more virulent flu strain was already here and travelling around the country’s rail networks with returning troops.

But it took the conservative government several precious weeks to take it seriously. Flu was not considered a notifiable disease until early November and no limits were placed on the Armistice celebrations, which helped intensify its spread. However, soon the city streets were empty as shops and offices closed, people refrained from social contact and sickness took over.

Politics played a role in Wellington’s response. Mayor John Luke was also the Government MP for Wellington North. Peter Fraser’s Labour colleague Harry Holland had recently stood against him for the seat. There was likely some conflict between Government and opposition. As a member of the Government, Luke had to accept the cautious response from his Minister of Health. Fraser was an activist new MP in an electorate which included severe areas of deprivation such as Te Aro flat with poor quality crowded housing, poverty and rapidly spreading illness. He wanted to get going.

Committees including the Mayor and a grid system for the city with makeshift hospitals and support systems were soon established. Peter Fraser put his personal phone number in the papers for anyone to ring who needed help. He and his volunteers went door to door bringing food, helping with cleaning or child care (as many parents were ill or died) and even carrying out bodies. Medications were expensive, so Fraser arranged for people to get what they needed with the bill sent to the Government. Later he persuaded the Government to bring in a pension for flu widows similar to the financial support war widows received.

During the epidemic both Holland and Fraser, from the left of the young Labour Party, caught the flu but recovered, while the more conservative leader of the Labour Party and MP for Wellington South, Alfred Hindmarsh, died. The resulting Labour Party was more comfortably socialist. Fraser was deeply affected by his experiences, but it took 20 years before a newly elected Labour government could change laws to improve housing, health and welfare.

Where did this virulent flu come from? The latest thinking is that this new strain evolved in Kansas early in 1918 and spread to Britain and Europe with the US troops going to war. Servicemen then took it home to their own countries at the end of the war.

It was unusual in that November marked the height of the epidemic in both northern and southern hemispheres, when the regular New Zealand flu season follows six months behind the European winter. Another unusual aspect was that younger adults were most likely to get sick and die rather than the children and elderly who were most at risk from epidemics – the average death was a male aged 28.

Māori and other indigenous populations were particularly badly affected, with the Māori death rate much higher than non-Māori. Australia was less affected than New Zealand as more quarantine measures were implemented against arriving ships.

Understanding of illness and infection developed during the epidemic. The general theory until then was that flu came from ‘miasma’ or fumes from sewage or objects, rather than from other people. With few medications available, hydration, cooling through sponging or aspirin (if available), isolation and fresh air became the main interventions. Zinc spraying was a popular but probably ineffective preventative. Treatment required intensive nursing in crowded makeshift hospitals and not surprisingly many front line workers died. The work of  volunteers was vital.

Margaret Cruickshank’s statue is one of very few memorials to those who worked or died in the influenza epidemic of a century ago, while WW1 memorials are numerous. I hear there is a plan for a plaque at Wellington’s Pukeahu National War Memorial Park naming the dead. I hope so. Perhaps a more significant way to honour those who died is to be well prepared to rebuff the next pandemic.