How many artists, anywhere, have mastered Impressionism, large-scale documentary murals and the sharp edge of graphic design in the form of commercial posters? Such was the achievement of Marcus King, a relative unknown – but, paradoxically, probably the most viewed artist New Zealand has ever had. 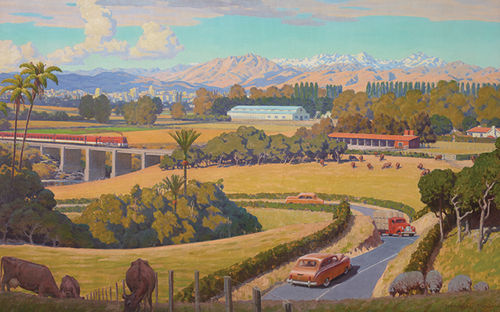 King is best known today for his striking vintage travel posters. Among his best: a flying skier, a Maori chief  and numerous arresting scenes of an idyllic pastoral paradise. These posters place him as New Zealand’s premier poster artist of the period – he was employed by the Tourist Department from 1935-1961 – and an important pioneer in New Zealand graphic design. 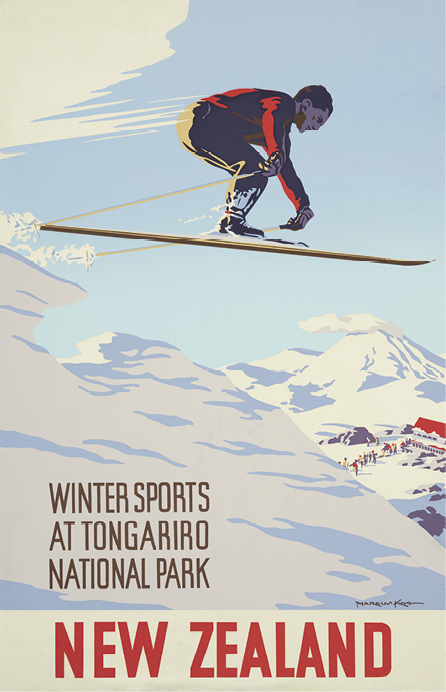 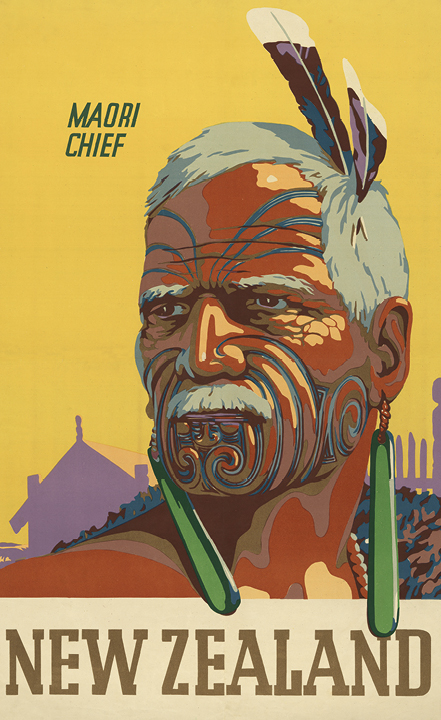 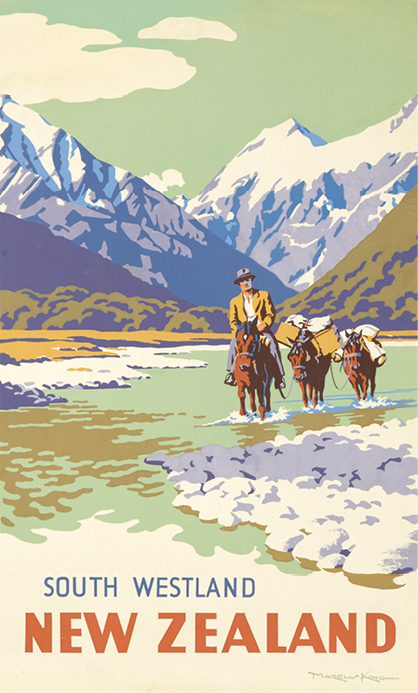 Considered more deeply, however, King’s other contributions to New Zealand are equally if not more important.

In 1938, King painted one of New Zealand’s most recognisable artworks, The Signing of the Treaty of Waitangi. For over 75 years, it has been widely reproduced, including on multiple book covers and a wide range of websites (including New Zealand’s official encyclopedia). While King is often overlooked as the artist, the painting is arguably the defining image of New Zealand’s most important historical event.

The painting – along with a companion work depicting the arrival of Maori in New Zealand  – was commissioned for the 1939/40 New York World’s Fair, an event that attracted 8 million people into New Zealand’s pavilion. The Fair had a futuristic intent and theme – ‘a world of tomorrow’ – with New Zealand looking back 100 years to show how quickly it had caught up to the world. 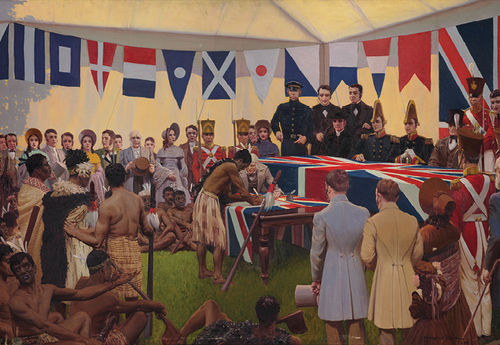 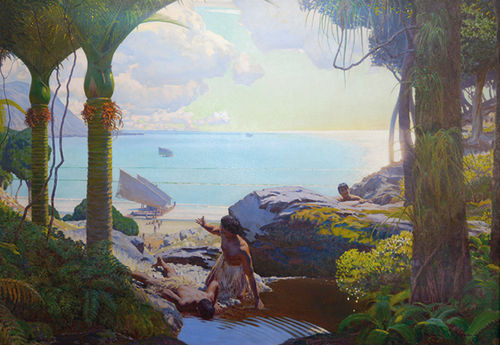 King later painted a second and bigger Treaty-signing mural in 1952 – that painting went to London for exhibition but its whereabouts are unknown (a re-creation by Dick Frizzell in 2014 does, however, help fill the gap). King’s Treaty works and his other well-researched paintings of Maori culture form an important series of mid-century works documenting New Zealand’s cultural heritage. For King, it was a lifelong interest, shaped by a childhood memory of stumbling across an old Maori pa. 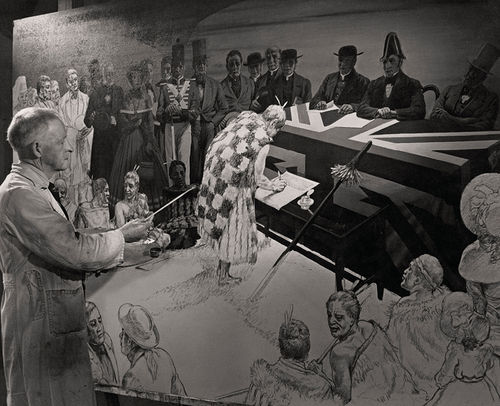 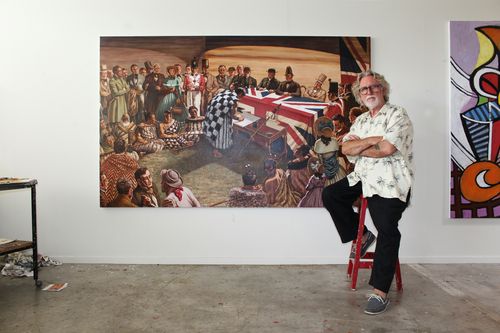 While New York was a highlight of King’s career, he had international exposure long before. From 1924, King was a respected artist for New Zealand’s pavilions at international exhibitions; the go-to trade events and gigantic advertisements of the day (as odd as those events now seem in today’s advertising environment). New Zealand had much to gain from bolstering its tourism and trade, both as participant and periodic host.

King, alongside Nugent Welch, had a prominent role at the 1924 Empire Exhibition in London; an event that also drew eight million people into New Zealand’s pavilion. Among King’s works were large paintings of cityscapes and milestone historic events, particularly the ‘four phases of colonial life’ – the coming of Tasman in 1642, the arrival of Cook in 1776, the Pioneers of 1840, and the migrants of 1924 arriving in Wellington Harbour in ‘the splendid liners of today’.

In 1925, for Dunedin’s New Zealand and South Seas Exhibition, King painted a 10 metre mural depicting New Zealand’s industrial evolution. He also played important roles at world events in Toronto, Glasgow and San Francisco. Time and time again, King was asked to brand the country as an alluring tourism utopia and productive agricultural and industrial paradise. It was a significant presence for New Zealand art on the world stage – but his name was a well-kept secret. 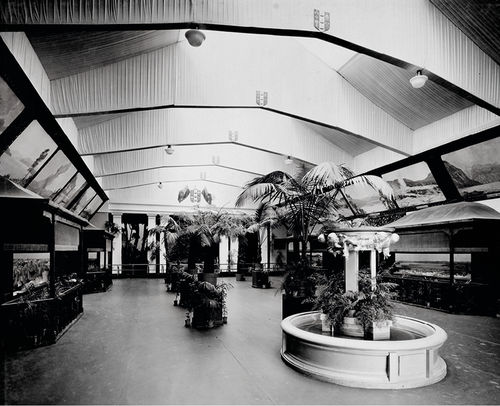 Alongside his paid government work, King was on his own mission. At the other end of the arts spectrum, King excelled in Impressionist painting from about 1920, learning his craft from Swedish-born painter Edward Fristrom. In 1926, King was singled out for his Impressionist paintings in a breakthrough show of New Zealand art in Sydney. Come 1932, it gained attention in London, commended alongside Charles Goldie.

King would go on to produce an extensive body of Impressionist and Modernist landscape work, mostly in and around Wellington’s bays and hills . It is one of New Zealand’s richest artistic records of a local environment.

Community-minded, he was also a pioneer advocate for professionalising and popularising New Zealand art, including as a founding Vice President in 1924 of the National Art Association; a progressive organisation that celebrated art in its widest meaning and encouraged New Zealanders to become ‘lovers of art’. 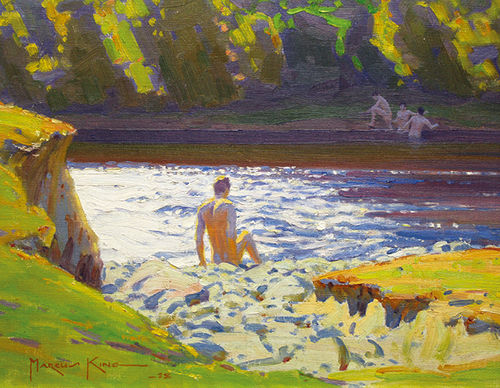 While King reflected in his retirement that his mentor Fristrom was ‘born to paint’, in all reality King took that obsession, across both fine and commercial art, to a wider and deeper level.

His 26 year stint at the Tourist Department, and retirement at age 70, reveal more than a hint of the passion he held for design, painting and publicity. Even despite a prodigious output, King would note in retirement: ‘I have wasted so much valuable time, which I could have spent painting. Whatever I’m doing, painting is never far from my thoughts.’ With regard to his ‘miles’ of murals and historical reconstruction works, he’d lament ‘I would like to have done a lot more’.

What is interesting looking back on King’s life is how closely it tracked the development of design and publicity in New Zealand. Key events occurred at crucial times in his personal and professional development, from observing the growth of railways advertising as a young art-inspired kid, to becoming a foundation member of the Quoin Club as an artistically-ambitious young man; from living and breathing the Art Deco movement, to the development of silkscreen printing in New Zealand as a vehicle to take King’s most arresting designs to the world.

Even his start in the Tourist Department reflected the maturing of his art as the Department’s tourist drive was, post-Depression, moving up a gear. King, it seems, was always in the right place at the right time. Even at the end, King’s career would gracefully close just ahead of mainstream colour photography and television—exciting new media but the arch-enemies of silkscreened posters and paint.

Given all this, would be reasonable to assume that King’s story was well known. Yet, until now, his art and life have remained a mystery – in part a result of the art world’s fascination for the new. Now is the hour for Marcus King, and for reconsidering his distinct fusion of art, design and advertising, and his significant contribution to New Zealand commerce and culture.

Peter Alsop is, along with Warren Feeney, the author of a major new book on Marcus King's work and career.

Marcus King: Painting New Zealand for the World is published by Potton & Burton (hardcover, 360 pages), is available from all leading bookstores (RRP $79.95).

You can watch the documentary Graphic Wonderland (15 mins) on early New Zealand commercial art, including historic footage of Marcus King and reflections on King from former colleague and boss Alan Collins. 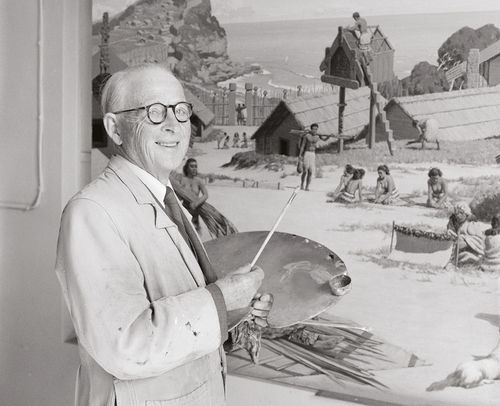