Here are two iceblocks that you can buy at your local dairy: 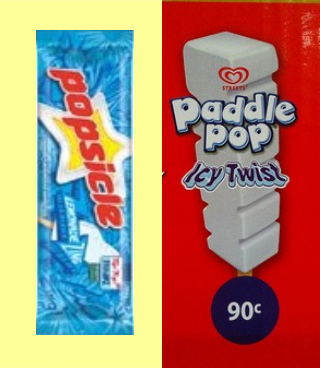 Let’s estimate the carbon dioxide emissions from each iceblock. Most of the energy in manufacturing iceblocks from raw materials* of refined sugar and clean water will be down to cooling, so we can calculate the following approximations (assuming cooling of water from room temperature at 20°C to freezer temperature at -20°C):

Then we can make some assumptions based on typical figures in terms of coal thermal power plants (typical efficiency around 35 per cent) and industrial freezers (typical coefficient of performance around 2.5). We’re rather unfairly assuming that all New Zealand’s dirty energy is sourced from coal (with an energy density around 30 MJ/kg), which it’s not:

But here’s something that you may not have considered before. Let’s look at the data that would be recorded in terms of assessing New Zealand’s contribution to greenhouse gas emissions (at the end of the manufacturing process, i.e. excluding transport energy input):

When we’re attempting to reduce New Zealand’s greenhouse gas emissions this final set of figures is all that’s considered. So what happens when we ask the question (based on our data): “How can we reduce New Zealand’s contribution to global warming in terms of iceblock manufacture?” The answer is obvious. In fact, the answer deserves its own paragraph in bold:

Q: How can we reduce New Zealand’s carbon dioxide emissions?

While this answer seems completely stupid (because this strategy would actually raise global carbon dioxide emissions—since the Chinese Paddlepop emits more carbon dioxide than the New Zealand Popsicle) it is actually technically true. This strategy would lower New Zealand’s greenhouse gas emissions according to the accounting system that we currently use—and therefore be the desirable course of action to take.

The problem here is that greenhouse gas emissions from energy production are attributed to the country where the actual gases are emitted (which can be calculated easily and reliably using the guidelines of the UNFCCC). A more meaningful system would be to attribute the greenhouse gas emissions to the country where the energy is actually “consumed”, i.e. the country where the energy embodied in goods and services actually ends up. Unfortunately this would be impossible to accurately calculate at the moment (although it can certainly be estimated); and it would require a complicated global system of traceability to produce reliable numbers. So for now we’re stuck with the current system of attribution of greenhouse gases.

To repeat this last paragraph in terms of our iceblocks: under our current system the carbon dioxide emissions from manufacturing the Tip Tip Popsicle (0.5 g) are attributed to New Zealand (because that’s where they are physically emitted); the carbon dioxide emissions from the Streets Paddlepop are attributed to China (1.7 g). A more correct approach would be to attribute the energy emissions of both iceblocks to New Zealand (a total of 2.2 g of carbon dioxide) since this is the country where the manufacturing energy embodied in the iceblocks is actually “consumed”.

If we don’t acknowledge this serious flaw in the official system of greenhouse gas accounting then we can end up (as we saw with our iceblocks) in taking the opposite action to that which would achieve our desired goal. In other words: our objective is to reduce global greenhouse gas emissions—but by considering New Zealand’s emissions under the current system, we discourage a clean energy product from New Zealand (the Tip Top Popsicle), in favour of a dirty energy product from China (the Streets Paddlepop), i.e. exactly the opposite of our stated objective.

All of this seems so obvious that it’s hardly worth writing down here. The problem, unfortunately, is that the well-intentioned strategies suggested by our political parties (and some policy analysts)—such as an ETS or a “straight” carbon tax (even a revenue-neutral version) on coal, gas, oil, and limestone burnt in New Zealand—all have the effect of sending price signals to discourage the consumption of products manufactured in New Zealand in favour of imported products. And it’s entirely possible, as with our iceblocks, that these imported products may well make a greater contribution to global greenhouse gas emissions than the products manufactured in New Zealand.

The possibility of increasing global greenhouse gas emissions (in a well-intentioned attempt to reduce them) is true of anything we do that increases the price of carbon dioxide emissions solely from energy produced in New Zealand. Furthermore the same effect will also occur in terms of price signals exported across our borders to overseas markets. By increasing the price of New Zealand’s goods and services via any added cost to our dirty energy then we discourage the consumption of our products overseas.

To return to our iceblocks, if we levy a cost on the dirty energy component in manufacture of the popsicle then we will increase the total price for the exported product. A consumer in Australia, for example, would then receive a price signal encouraging purchase of the dirty energy Streets Paddle-pop from China rather than the clean energy TipTop Popsicle from New Zealand. This would also be true in terms of encouraging purchase of high-emissions milk solids from Britain rather than lower-emissions milk solids from New Zealand. Both would tend to cause a global increase in emissions of greenhouse gases.

Clearly, therefore, any disincentive that we apply to the production of dirty energy in New Zealand must satisfy three criteria:

(An alternative, of course, is to incentivize clean energy in New Zealand, but that is much more complicated proposition—not least because the obvious place to fund such a scheme would be from taxing dirty energy, which puts you right back where you started.)

All of this sounds like a recipe for doing nothing to reduce greenhouse gas emissions in New Zealand. But it’s certainly not meant to be. We can do something, and indeed we already have a tax on goods and services that meets the above three criteria in terms of price signals (though not specifically on dirty energy, of course).

In a follow-up to this post, I’ll suggest a way to tweak GST so that it only applies to the dirty energy component of goods and services, and therefore provides the correct incentives to reduce carbon dioxide emissions in New Zealand.

Dr David Haywood is an energy engineer who is happy to offer pro bono advice on energy policy to any political party.

* Depending on where the sugar is sourced there may also be a very significant dirty energy input in terms of harvesting and refining (the same may apply to water).  The source of sugar or water for any particular iceblock is hard to establish and so the energy input won’t be considered in our rough approximation here.