Over the past couple of weeks, the Herald's new data blog has been looking at population change data revealed by the 2013 Census. It's been a nice, open process culminating the Wellington firm Dumpark's creation of an interactive showing population increases and decreases around the country, from 2001 to 2013.

There's a general flow towards the cities and away from the regions, with a few striking features. None more so than the population shift out of the east of post-earthquake Christchurch -- which is, fittingly, the red zone on this map detail (a blue dot is one resident increase, a red dot a decrease): 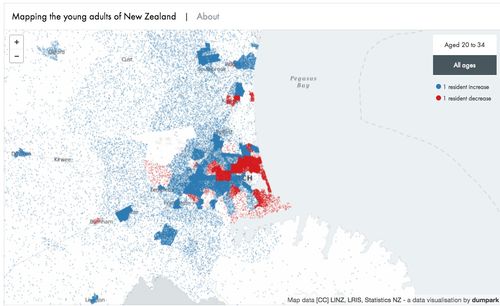 But the part that caught my eye in the original iteration of the exercise, by economist Aaron Schiff, was closer to home. Where I live, in fact.

I moved to Auckland in 1983, and for most of that time, Auckland's inner Western suburbs have been a young place. Even as the Pasifika families of Ponsonby and Grey Lynn were gentrified out, the inner west remained a place where young families could buy in and set up. When I returned from London in 1991, I met a generation of kids who'd grown up in those suburbs, walking distance from the city.

Those days are really over.

The all-ages map shows a huge intenstification in the CBD and a general increase around it, but the population is static around the Ponsonby ridge, and has decreased in Herne Bay and St Mary's Bay (as flats and low-rise apartments have given way to luxury harbourside pads). 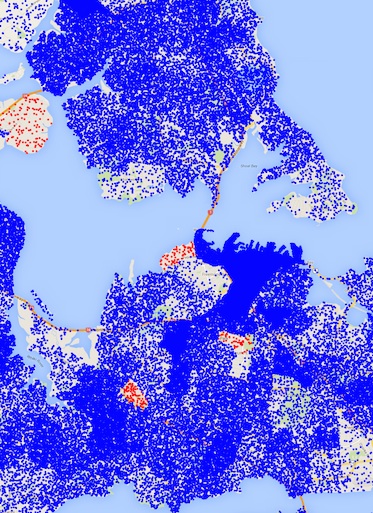 But the real money is the 25-34 "young adult" map. You see the same CBD intensification  -- and a very evident emptying-out in the inner suburbs. 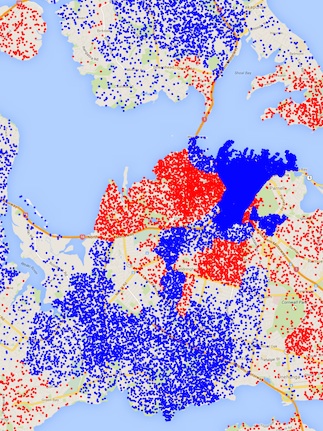 Ponsonby, Grey Lynn, Point Chevalier: these are no longer places where people can easily buy in and start young families  -- but also, it appears, places where young adults are less likely to live full stop. A whole set of cultural assumptions about about these places -- diverse, bohemian, liberal -- seem likely to have gone with the young adult population. As we long feared, we're going to turn into fucking Parnell.

When I lived in the Auckland CBD in the mid-80s, it was quite an unusual thing to do. My friends and I literally broke the law when we converted a warehouse in Fort Street and lived there. Now, there are tens of thousands of apartments -- not all salubrious, but generally relatively affordable, close to work and study.

That makes the transition to home ownership and starting families particularly abrupt. Central Auckland, so cheap and accommodating for the baby-boomers, is prohibitive for their children. Houses don't fall much below $500,000 (which, let's be clear, means saving $100,000 for a 20% deposit) until the commute to the city nears an hour.

The obvious solution is not, as Act's David Seymour believes, to "create more Epsom" in Auckland distant hinterlands -- where they would palpably not be Epsom, or Ponsonby, Herne Bay or Mt Eden -- but to enable more people to live near their jobs, near to the city's life and cultural infrastructure. To not, as Seymour and his wealthy voters would do, raise the drawbridge and protect the people already in the castle.

There are limits here too. I felt obliged to object to a Housing New Zealand Unitary Plan submission seeking to spot-rezone its properties in our narrow little (17 properties) Point Chev cul de sac from "mixed housing suburban" to "mixed housing urban", a zoning intended for the fringes of town centres and main roads. It seemed an abuse of the process.

It wasn't the greater height limit: I'd have been fine with the 10 metres in the draft Unitary Plan, which was scaremongered out by Bernard Orsman and others, and I'm realistic about Housing NZ redeveloping to add dwellings in our street. But the prospect of Housing NZ aggregating its sections to escape any density limits in such a small street was just too daunting.

Anyway, we've been over this territory before and I'm sure there are other interesting insights in these interactives. Feel free to share your thoughts.