Election campaigns are exhausting for everyone concerned, and the strange one we've just emerged from more than most. Even for the losers, there's usually at least the simple relief of it all being over. Most of us out here can just mentally change the channel. But spare a thought for the journalists.

Like the politicians they cover, political reporters have itineraries. But they also have deadlines -- and in the modern media world, those deadlines fall closer together and must be met with fewer and fewer resources. One journalist I know, sick throughout the final week of the campaign, vomited in a stranger's garden on Sunday, out of stress and sheer exhaustion. The additional treat of being abused on social media must feel pretty special at such times.

So there was a grim irony yesterday in poor bloody gallery reporters having to spend more than seven hours, much of it slumped on the hard floors of the Parliament building, waiting outside the Labour caucus room for the battered MPs to emerge from their debrief. This great photograph posted to Facebook yeterday by One News' Katie Bradford (and used here with her permission) captures the vibe: 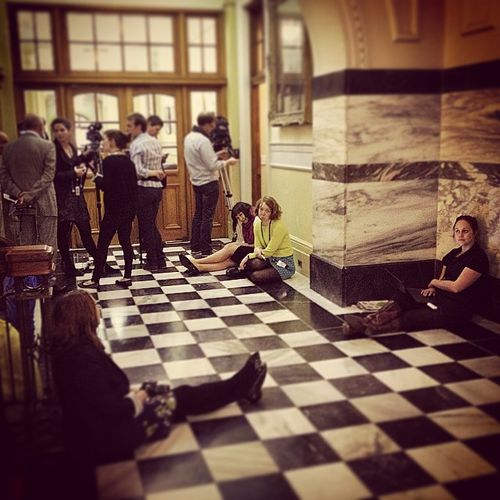 They didn't have to wait, of course. The world wouldn't end if an MP wasn't wrangled in the corridor, and in this case, little or nothing was actually got when the caucus did actually emerge. But the reporter who missed the moment would not be very popular with his or her boss.

After all this sympathy, I would like to observe what can be really wrong with political reporting. Journalists are not, with a few exceptions, biased in a partisan sense. But the collective culture (especially with male journalists) is quite often about the pursuit of the weakened. Duncan Garner inadvertently admitted as much in a talk about his years as political editor at the Wintec Press Club earlier this year. He told a story about hearing that a particular minister was on the skids and swinging into action, thrilled at the scent of blood in the water. It was no coincidence that John Key got the most onerous grillings of his leadership exactly when he was knocked off balance by Dirty Politics.

Yesterday's post-caucus press conference with David Cunliffe was brutal. The Labour leader, denied even a no-confidence vote by his MPs -- because they don't want him to lose one just yet, and thus trigger Labour's party primary process -- looked shattered. His voice wavered, there may have even been tears in his eyes. TV3's political editor Patrick Gower did a decent enough job of explaining the grim mechanics of Cunliffe's predicament in his report -- but Gower's conduct in the press conference made me uneasy.

He shouted at Cunliffe, a lame-duck leader with no good answers, for the answers he wanted. And then he barked: "Just say it -- stop being tricky!"

"Tricky". It's hard to over-emphasise quite how loaded that word is. "Tricky David Cunliffe" is an attack line conceived and cultivated by Cunliffe's National Party opponents over the entire time of his Labour leadership. There can barely be a National minister who hasn't deployed it: The first few Google results for the phrase turn up Todd McLay, Amy Adams, John Key and, naturally, Whaleoil. Its organised use had a lot to do with shaping the popular perception of Cunliffe. It would not have had meaning without Cunliffe's missteps, but it was a very successful political strategy.

For these reasons, it's a line that a journalist simply should not be using.

But there are other reasons too. Cunliffe has failed as party leader. But he has not committed a crime, breached ethics, lied or hidden something from the public. He does not owe the apology to the country that interviewers have demanded from him in the past two days. He is simply an easy, bleeding target. Perhaps a little humanity is in order.

Last Night's Media Take looked at democratic events thrice over: in Scotland, Fiji and New Zealand. I particularly enjoyed the smart, purposeful commentary of AUT's Richard Pamatatau on the nature of the punditry in our campaign cover. You can watch it here.