It was always on the cards that Jacinda Ardern's first conference keynote as Labour Party leader would contain a significant policy announcement; a reward for the people in the room, an underlining of her government's brand. What's pleasing is that the promise of 600 new learning support coordinators in New Zealand schools not only addresses a critical need, it hasn't just been pulled from a hat.

The commitment was foreshadowed in the draft Disability and Learning Support Action Plan that was released by associate Education minister Tracey Martin in September. The basics of the co-called Learning Support Delivery Model are explained here. Essentially, the new coordinators will take the pressure off teaching staff – who have been obliged to load special education oversight onto their other duties – and provide a consistent point of contact for families.

The key will be in the execution – and particularly in actually finding 600 people with the necessary skills (these are not just teacher aides). But it's something that teacher unions have been calling for and it fulfills a commitment in the governing support agreement with the Green Party, as well as rightly validating Martin's longstanding and authentic engagement with special education issues. Ardern's Labour has sometimes contorted itself with the effort of making New Zealand First feel important, but this is something good and substantial.

Even Nikki Kaye, speaking on behalf of the National Party, welcomed the announcement, albeit with a bit of a side-eye about the commitment being made without formal Cabinet approval, perhaps to fend off the threat of more teacher strikes. Fair enough.

Unfortunately, one of Kaye's colleagues missed the moment by a long, long way. 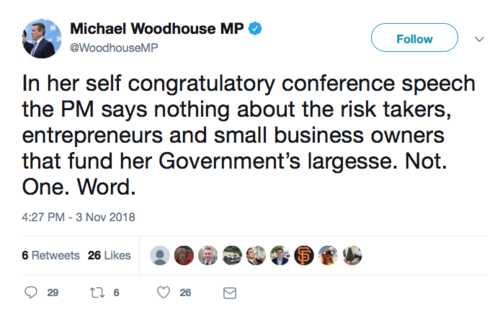 There is so much wrong with this tweet. Business owners are not the only taxpayers – far from it – and not the only New Zealanders with a claim on policy. Some of them also have children who do need more than the education system has been able to provide. I'm one of them.

We got to see the best and worst of special education provision when our two autistic children passed through school. And we were lucky – our older son (on our very persuasive written appeal) was granted ORS funding, something he'd never get now. By contrast, we had to pull his younger brother out of formal education altogether, and to battle a bullying special education caseworker who simply had no grasp on his condition. The flexibility in approaches promised under the new plan might have kept him in school back then.

Responding to a speech with that education announcement as its centrepiece by making a false distinction between "risk takers" who pay the bills and the grasping recipients of the "largesse" was misleading, callous and petty.

Perhaps Woodhouse is just feeling unusually confident at the moment, having succeeded in torturing Immigration minister Iain Lees-Galloway over the decision to allow a Czech criminal to stay in New Zealand. The background story is complicated and it may be, as Tuariki Delamere suggested, that Karel Sroubek's case should never have come across Lees-Galloway's desk – because Woodhouse or one of the last government's other Immigration ministers should have deported him years ago. (Essentially, Woodhouse is insisting that Lees-Galloway should go because he didn't demand the right information from officials, while absolving himself because he ... didn't get the right information from officials.)

But here's the thing: National doesn't actually believe that Lees-Gallowway has committed a resigning offence, although it will be delighted that one or two of the more biddable commentators have taken the bait. So far as I know, no actual harm has occured as a result of Sroubek not being deported. That will likely remain the case until the decision is reversed on receipt of further information. For all the professed outrage at someone getting something they didn't deserve, it's petty.

Even when there was a major policy at stake in the Kiwibuild rollout, one Opposition MP, Judith Collins, managed to make it mean and petty. One of  the 20 couples to come out of the Kiwibuild lottery wound up being the subject of some quite nasty online bullying, with which she engaged, even though they had done nothing wrong and even though they met the eligibility criteria published months ago. But, again, the core of the narrative constructed out of their pillaged social media profiles was someone had got something they didn't deserve.

Perhaps the government shouldn't have offered up the couple to journalists, perhaps it should have seen that their past travel and their future earning prospects might have made them seem undeserving. I'm not sure about that. But I am quite sure that Lees-Galloway could have made a much better fist of his own situation. Hiding behind a pole to avoid reporters? Really? In the end, his evasiveness gave the story legs and has done him more political damage than the decision itself. It's been unlovely to watch.

If it couldn't find a way to stop the Immigration minister from self-harming, the government did know that the Prime Minister's star-power would wash away the story for a few days at least, and that's what we saw yesterday. But you can't do that every week. It may be that the secret to getting everyone to focus on the big vision for more of the time is some vastly better political management of the small things.