"This is unspeakably pleasant," I observed to my companions. Yes, they nodded, it is.

We were sitting in the sun enjoying delicious and sustaining vegetarian burritos for Saturday breakfast in the main eating area of the Splore festival, having dispatched whatever hurt remained from the late night before with a round of coffees and a pre-breakfast swim at the beach 50 metres away. And things just seemed perfect.

It helped that the facilities had been designed for a capacity crowd of 10,000 people and the actual sales on a weekend when much else was happening were perhaps 3000 less, but I have never attended a music festival as comprehensively and thoughtfully produced as Splore 2014 was. Things just worked, and where they didn't work, they were fixed. (The way a huge backup generator was smoothly brought down from the crew field and installed and connected at the mainstage right in the midst of the Saturday night frolic was extremely impressive.)

The festival's founding director, Amanda Wright, was relieved by her colleagues of onsite duties this year -- no comms to wear, no mobile phone number on the runsheets -- so she could enjoy the show (not that people who work on Splore don't also join the party). But she found time for an interview with the Herald's Hugh Sundae, who has done some really good work around Splore:

One key was the use of the AWOP stored value system (originally developed in Hamilton for use at Rhythm & Vines) for all onsite transactions, from the food and drink to the $2 shuttlebus up the hill and the koha at the composting toilets. Particularly at night, when you don't want munted punters fishing around for their Eft-Pos cards or to be keeping mountains of cash onsite, having everyone wear a wristband with a waterproof RFID chip is a tremendous solution.

Sustainability is both a core value and a practical necessity at Splore. Less waste means less to remove to leave clean  the site at Tapapakanga Regional Park. So everywhere, there were bins colour-coded for compost (all the plates, bowls and forks were compostable), recycling and waste -- and most of the time, someone standing cheerfully by to cheerfully advise on what to post where. (The food that came on the compostable plates was also tremendous -- healthy, delicious and sensibly-priced. Special mention to Bird on a Wire and Ming King.)

This year also saw the introduction of the Globelet, a reusable cup in rigid, recyclable plastic that cost $2 to purchase and could be refilled all day and night. Those discarded were picked up and redeemed by kids for the original $2. I've never seen such a clean site.

The bars themselves were well-designed, well-managed and (to the extent that it's practical in an outdoor space) smokefree. Parents could bring in their children to dance. I know it's not necessarily an easy model to replicate at urban events, but it does show that it's possible to serve alcoholic drinks to a civilised crowd in a civilised way. In general, the presence of children (and babies! a lot of babies!) at Splore is a positive influence on the conduct of grown-ups.

They also had their own spaces: 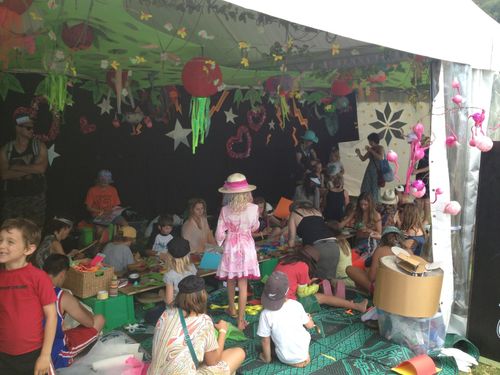 All this matters because like the the weather  (which was splendid) individual behaviour is a very important factor that the promoters can't control. Every ticket sold for Splore is effectively an act of faith on the part of the promoters -- faith that the purchaser will respect and enjoy the spirit of the event and be a good Splorer. Overwhelmingly, people do this.

In fact, they do more. One of the delights of the festival is that things can happen anywhere, any time. You can be just standing round for a moment and something like this passes through:

But longtime Splorers will also often be on their own freelance theatre missions, especially on Saturday night, which is costume night. Wholly uncharacteristically, I got into that. The theme this year, in line with the branding for the whole festival, was "Love", and my companions, all female, came up with the concept of me playing the Arabic patriarch and the seven of them my niqab-clad wives.

I was a little concerned at first that some people might see it as offensive, but in general we were greeted in the good spirit in which we set out. And wearing the clothes was really interesting. I wore a cotton thawb and pants, topped with a skull cap and damn it was comfortable (with the exception of the tighty-whitey underpants my man at Aswaq Mecca in Mt Albert sold me as part of the package -- no wonder Walter White was so angry). Without even really thinking about it, I moved differently in those clothes. But what was really notable was the wholly positive response from people in the crowd. People came over to tell me how much they liked my outfit. A surprising number called out "As-salamu alaykum!" as they passed.

The girls had a more mixed experience. Their niqabs were synthetic and at times they found the veils stifling. Most people smiled (it was quite hard not to smile at the sight of them dancing their asses off together), but others, invariably men, seemed to take what they wore as permission to enter their space -- staring into their eyes, miming posting letters and even touching them, as if to determine whether they were real or not. It was a small insight into what it might be sometimes be like to, say, just go to the supermarket for women who wear those clothes every day.

But there was also an element of anonymity and mystery that they all liked. ("No one can tell if you're smiling for a photo!") And my friend Lisa had the most amusing interaction when she took the bus up to the campsite to check on her kids and an earnest (but presumably very high) young man sitting next to her asked her when she had converted to Islam, and why.

Splore is very accomodating of human difference. I saw quite a few people with disabilities in the crowds, people of different shapes, sizes and colours. And although there were many beautiful bodies to be seen, it felt quite different to being around the prettied-up North Shore kids at Laneway -- in large part because by no means was everyone there a kid. Some families were represented by three generations.

As was the case at my first Splore experience two years ago, I had the privilege of camping and hanging with some longtime Splorers, which meant I got to meet a few of the artists and crew, including the people who installed this wonderful work in the heart of the site: 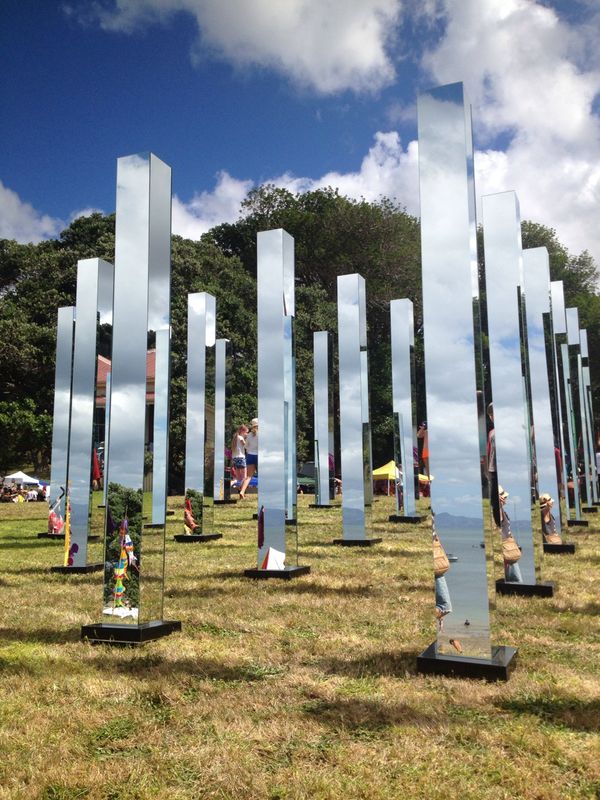 We also interacted with the robots deep into the night on the Art Trail: 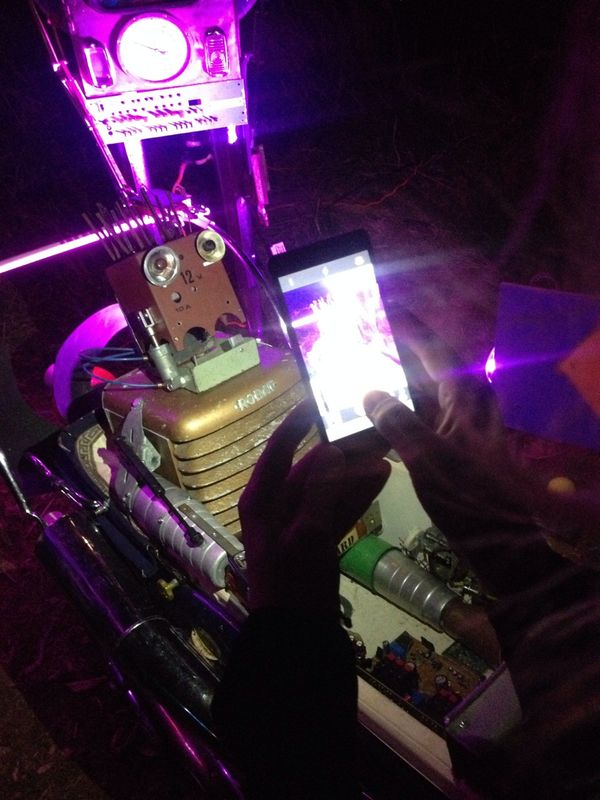 It occured to me on the first day that Splore is like a great wedding party: everyone's basically family, but some people just haven't met each other yet.

The music and performances? Sometimes I was too busy having fun with my friends to get around see everything I'd meant to. A lot of things (Weird Together, International Observer, Latin Aotearoa, Dastardly Bounder) I just enjoyed hearing in passing. But The Orb were everything I'd hoped for and Alex Patterson also played a great DJ set earlier in the day -- even dropping the old Balearic classic 'Jibaro', which brought me considerable joy. This was the moonrise as we waited for The Orb's set: 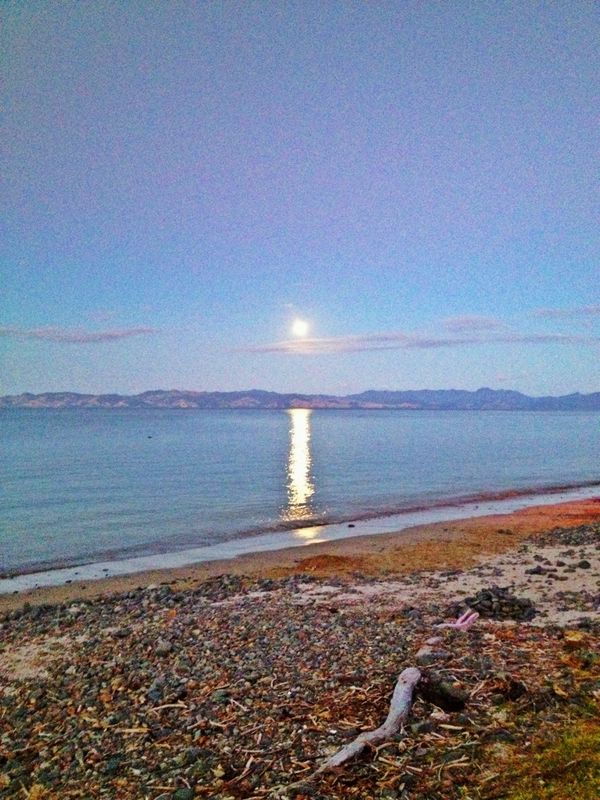 There was joy too in the Ragga Twins, who were the boisterous business in both their performances. Their main set on the Friday was, as they explained, "a history lesson" and kicked off with renditions of their first records, from the early 90s, which prefigured drum and bass, breakbeat and much of what came after. I bought those records at the time in London, and you can take it as read that I was very excited to hear 'Hooligan 69' played.

I also made sure the rest of my crew was with me at the Living Lounge for High Hoops on the Friday night and that was a lovely scene. I've raved enough about this guy I suspect, but, gee, he's really good. And then there were a string of DJs at the Love Shack bar down by the beach  ... 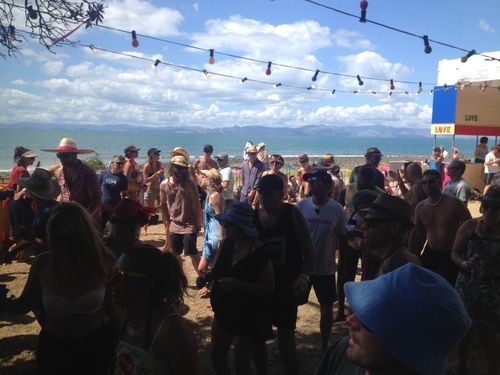 Murray Cammick playing disco, the promoter Amanda Wright firing out the breakbeat techno to a packed crowd, the Cuban Brothers DJing delightful dancehall and soul on Sunday afternoon, my friend LadyRox too, and KXVGN providing the thing I wished for last time: the 2am house music.

I wasn't so into the more aggressive beats from DJ Shadow on Friday (stunning visuals, though) and I fet a bit battered by Canada's Funkhunters after a while, but it all cohered, it all has common roots.

I'm sure it's possible to go to Splore and not dance, but I can't really imagine it. You dance like no one's judging you, because no one is. And if the DJ's tossing out all the old floor-fillers because it's a party -- well, what the hell else do you do?

And then after the heavenly dancing, there will be fallen angels ... 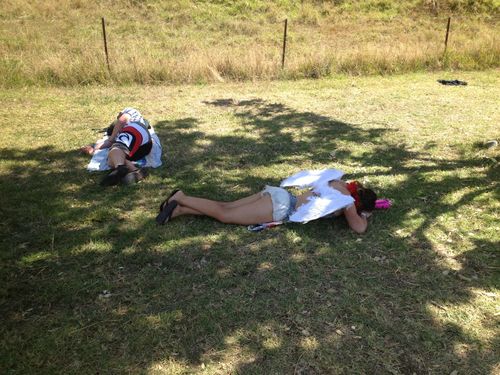 NB: Please feel free to upload your own images and videos in the discussion for this post. To add a photo, use the "choose file" button below the commenting window (you can add up to three images per comment -- just save and then click edit and add another). YouTube videos will embed automatically in our forums if you just paste in the URL (not the embed code).