I watched CERN's webcast of the Higgs Boson announcement last night -- not because I claimed to understand the detail of a presentation to what was, after all, an expert conference, but because it's fun to watch history being made. I watched the webcast of the Large Hadron Collider's first experiment for the same reason.

But also, it was interesting in a media sense. Everybody knew that CERN had a Higgs announcement of some kind and had been managing it towards the big reveal. How would they do that? How would it look, sound and feel? Set alongside the truth and trivia of Twitter, it turned out to be quite fun.

The tweets associated with various hashtags flashed by. There were physicists watching in pubs, lay people wondering what it was about and the likes of Professor Brian Cox and our own Science Media Centre doing their best to explain what was important in what was being said.

"5 standard deviations #higgsboson #moneyquote," tweeted Auckland University head of physics Richard Easther as James Incandela spoke. I got that part. It meant "we are really quite certain about this".

And then Richard said:

The #higgsboson is big news -- on a par with Rutherford's discovery of the nucleus, or JJ Thomson finding the electron.

I got that too.

And then Fabiola Gianotti stepped up to speak for the ATLAS detector. I tweeted:

Ms Gianotti, that is a *terrible* slide. #higgsboson

It did strike me as odd that the communication of such a historic discovery was being done via an almost illegible visual presentation. It must have been impossible to read from even halfway back in the room. We certainly do not expect physicists to be graphic designers, but we also talk a lot these days about effective science communication.

There was, of course, a greater crime: Gianotti was using the perennial whipping-boy of every font geek on the planet -- Microsoft Comic Sans. 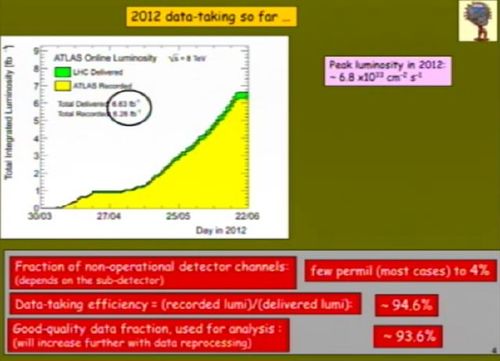 And it turns out that it's not the first time comic sans has conveyed breakthrough physics.

Half of Twitter took up the joke and ran with it. From the other half, the murmur of admonishment turned into a roar. When you've discovered a new particle that validates the Standard Model, then you can make fun of someone's font choices, right?

But really, it was funny in its way. As Richard put it:

Comic Sans shows up in slides announcing #Higgsboson results. The geeks are kind enough to give the cool kids something they can understand.

So, I'm glad I joined in. And I'm grateful for other media that found useful ways to explain the science to me. Most notably, Ian Sample's example with ping-pong balls and sugar on the Guardian website -- and this brilliant animated comic, which casts a great deal of light on both the significance of the Higgs search and the purpose and function of the Large Hadron Collider.

Intriguingly, some people -- including Green Party co-leader Metiria Turei -- expressed discomfort with the cost of the LHC project, and felt that the money would have been better spent alleviating poverty than seeking intangible knowledge. Let me put that into context for you.

The multi-year cost of the LHC is about $US10 billion. The US military budget for 2012 is is at least $US1000 billion. I don't think it's the collider we should be fretting about.

So, big day for humanity. How was it for you?