We walked down the hill on Friday evening to a beautiful play of light: the last of the sun reaching over from the west, the broad shimmer of the sea,  the high moon looking down, the glow from the tents and the necklace of globes that meandered up the slope towards us; a complex whole.

It was nice being with with people attending Splore for the first time and being able to think "There's really a place like this?"all over again. The picture I took only partially captures how pretty it looked. 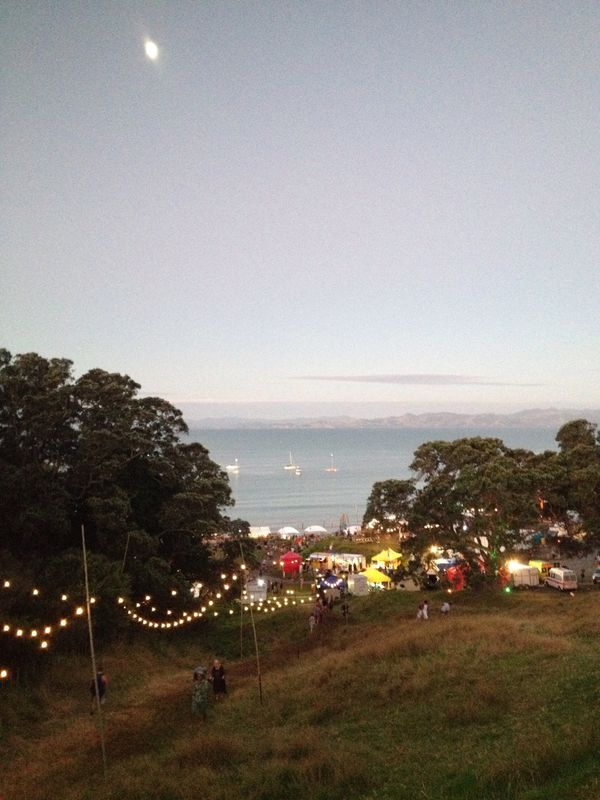 Quite a few people have said in the days since the weekend that this year's was the best Splore yet. And yes, I think it might have been. John Minty and his crew have enhanced the sense that the festival isn't only about one or two big things,  but a series of intimate experiences. The tiny Rogue Society gin bar, nestled among the roots of a pohutukawa, felt like a world of its own.

On the Saturday night I spent longer in one small space, the Lucky Star lane, than any other. My buddy Andy and I kind of forgot to leave until deep in the morning, so happy were we with the friendly freaks around us, the wild dancers on on the little stage and the oddball presence of DJ Belleville, who alternated minimal techno and French folk songs.

We discovered later that Belleville was actually camping next to us and kind of fanboyed him the following evening at the crew party. Here's Belleville and Andy: 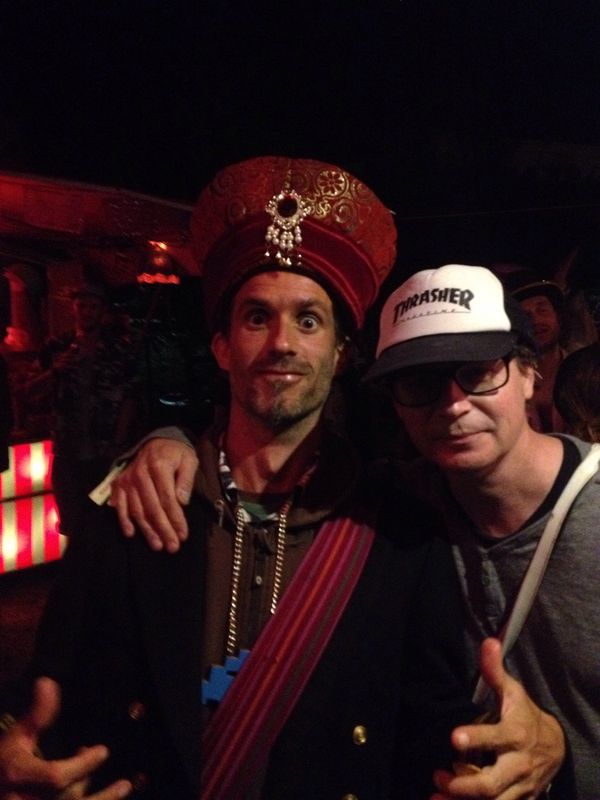 This is how Lucky Star looked in the daylight. It was very different in the night: 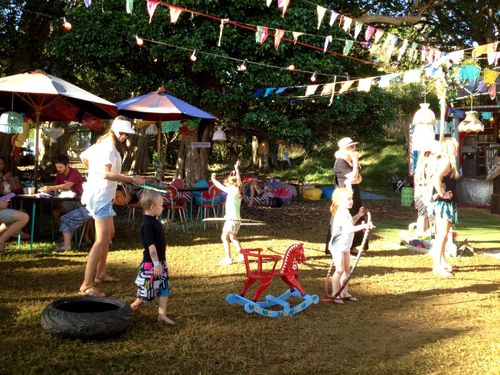 Ironically – this is after all a music blog post – I missed far more of Splore's musical offerings than I caught this year. Because I was working on Saturday running the Listening Lounge, I got in an early night after Leftfield, who were austere and a little disappointing, then spent spent much of the next day orchestrating talk and playing old house records in my own DJ set. But mostly, I spent a lot of the festival just having a good time with my friends.

But of what I did hear, the Dub Pistols were the surprise highlight. I don't really get their records, but live they were a riot of rabble-rousing party music – a bundle of dub, rave, ska and rock that was peculiarly and triumphantly British.

Elsewhere, High Hoops played a great, happy set in the blazing sun (it was rather better suited to the conditions than the music I was detailed to play next, tbh), the Ragga Twins were all wild energy, the Reverend Peyton and his Big Damn Band were lots of fun and Nightmares on Wax and Jafa Mafia were perfect Sunday fare. In general, whereever you were, the nice thing was feeling released by how unguarded the people around you were, how into it everybody was. Just dance how you feel like dancing.

But mostly, yeah, it was quality time spent with good friends. If you're thinking of Sploring in 2017, my advice is to not do it by halves. Go with friends, ideally someone who's done it before, reserve a campsite early, do something special. It really is worth it, because there really is nothing like this. 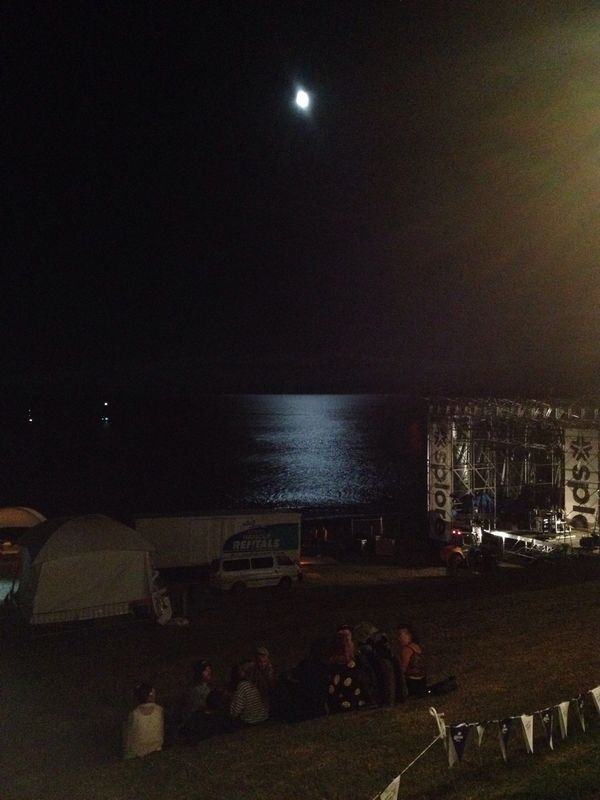 Sleater-Kinney play The Powerstation on Monday. And if you know that, you may know about guitarist-vocalist Carrie Brownstein's other accomplishments.

She talked to Kathryn Ryan a week ago about her work as co-creator of Portlandia, which is into its sixth season – and recently featured a guest appearance by The Flaming Lips. And her newish book, Hunger Makes Me a Modern Girl, looks like another in a very welcome run of rock memoirs by women.

All this and she's in a pretty good band. Yeah, I feel like an underchiever too.

You've probably seen Lorde's bring-the-house-down performance of 'Life on Mars' as part of The Brits' David Bowie tribute. You may not have seen the entire 15-minute tribute. It's here:

For many of us, vinyl record shopping isn't just about buying new records, but finding interesting old records (and in my case, records I can DJ with). So I'm quite excited about Flying Out's announcement of a new project with Captured Tracks shop and Sideman Records shop to ship in interesting second-hand vinyl. It appears that Captured Tracks founder Mike Sniper got the idea for a used-records business after the Flying Out people explained to him how hard it is to get interesting old stuff here in the antipodes.

The first shipment is on sale at the Flying Out shop at 80 Pitt Street, where they say "we have a great selection of records you don't often see in New Zealand, especially unusual jazz, soul, funk, Verve, Blue Note and various exotica - though we also have some interesting rock/alternative stuff too. We've gone for quality over quantity."

I've previously mentioned the album the late Graham Brazier had nearly completed with Alan Jansson at the time of his death – and Alan's view that it was the best thing Graham had ever done. The album now has a name – Left Turn at Midnight – and there is a crowdfunding campaign to raise up to $20,000 to get the abum completed and released. Contributions start at $US10, which gets you a free download of the album. So if you want to hear this record, that's what you need to do.

This is cool. Frances Morton for Noisey on the new album from New Zealander Cleve Cameron, which can only be heard in one particular Auckland taxi.

Murray Cammick writes for The Spinoff about tagging along when Herbs went to launch their Senstive to a Smile album in Ruatoria in 1987. It's a companion piece to Steve Braunias's email interview with Angus Gillies about the latter's series of books on the whole, strange business of the Ruatoria rastas in the late 1980s.

Two of my albums of 2015 were those by Anthonie Tonnon and Nadia Reid. Happily, the pair of them next week launch a national "urban folk" tour with Darren Hanlon. It begins on Thursday in Oamaru and winds up on March 11 and 12 at the King's Arms and Wellington's meow respectively. You can buy tickets here from Under the Radar.

While you wait for Street Chant's Hauora album, they've posted an out-take:

Another buzzy, bassy tune from Bordertown, creators of that awesome 'Lost in Music' remix I posted recently. Free download:

And a righteous kitchen-dancing special. Karim Chehab reworks Special Touch's 'This Party is Just for You'. A very funky free download: