Perhaps I'm just old, but it seems to me that the problem with some modern pop music is that it is so empty of the things pop music is supposed to possess. Such was the case with the joyless mess that Miley Cyrus performed this week at the MTV Video Music Awards.

The problem wasn't that the performance was bawdy -- she's 20, whatever -- but that it was really terrible. Some commentators reached for Madonna comparisons. But, you know, Madonna made -- and still very profitably makes -- people want to dance and sing along with her. I can't even remember whatever it was Miley sang.

Her partner in vacancy at the VMAs was Robin Thicke, who has really distinguished himself this month by pre-emptively suing the estate of Marvin Gaye to fend off any claims against his hit song 'Blurred Lines', which is by the singer's own admission, modelled on Marvin Gaye's 'Got to Give It Up'.

You can hear both of them along with this report on the legal action. They do embody a very similar groove, except that Marvin's song is cool and beautiful, and Robin Thicke's sounds  like a novelty record. Bah. Really, bah.

In much-more-my-kind-of-pop-music news, Lorde played a private showcase in Auckland this week (I'm only mildly miffed about not being invited), performing songs from her forthcoming debut album Pure Heroine, which is out on September 29. If you really can't wait to hear the new tracks, they feature in the multitude of YouTube videos from her recent US dates.

She also, of course, plays Vector Arena on Saturday week. I joined this iHeart Radio outfit to claim my free tickets, but I haven't heard back. Has anyone?

Universal Music's Adam Holt offered some fascinating insights about what the label did -- and perhaps as importantly, didn't do -- with Lorde in the NetHui panel discussion on Music and the Internet that I ran with him, Sam Scott and Chris Hocquard back in July. You can watch the video of that session here, and I honestly recommend you do if you want to know how artists, labels and managers are actually responding to the change the internet is bringing to their business. (The sound on the video failed for the first 14 minutes, so it starts with Chris explaining how and why he set up the digital aggregator DRM.)

It's fashionable to declare that the music business is a bunch of idiots who don't understand what's going on. In fact, I think music is further through The Change than any other media sector.

Over at TheAudience, choiceVaughan's 'Eat People', featuring Tom Scott rapping and Tyna Keelan gospelling in the background, seems a cert to be grant winner this month (today is the last day for voting).

Elsewhere on TheAudience, Martyn Pepperell continues to pick 'em. I thnk I first came across the Christchurch bedroom producer St Eden via a Home Brew Mix he did. He now records as Yvnalesca and I think this tune, which reminds me a bit of SBTRKT, will go quite a bit higher than its present position at 70 on the chart:

NZ On Screen has retrieved a real treasure this week. In 1984, Emmylou Harris and the Hot Band toured New Zealand and the country legend did a deal to record a live special at TVNZ's Auckland studio for which she would own the international rights. The set includes  her Gram Parsons collaboration 'Grievous Angel’,  Springsteen's ‘Racing in the Street’ and The Crystals' ‘He’s A Rebel’. Wow. You can watch that here.

The Bats played a live-to-air for the Seattle radio station KEXP. It's here:

You remember I wrote a while back about former 3D David Saunders stepping out with Street Chant as his backing band? They're making it a thing, with a new single, a tour and this awesome Chris Stapp poster. 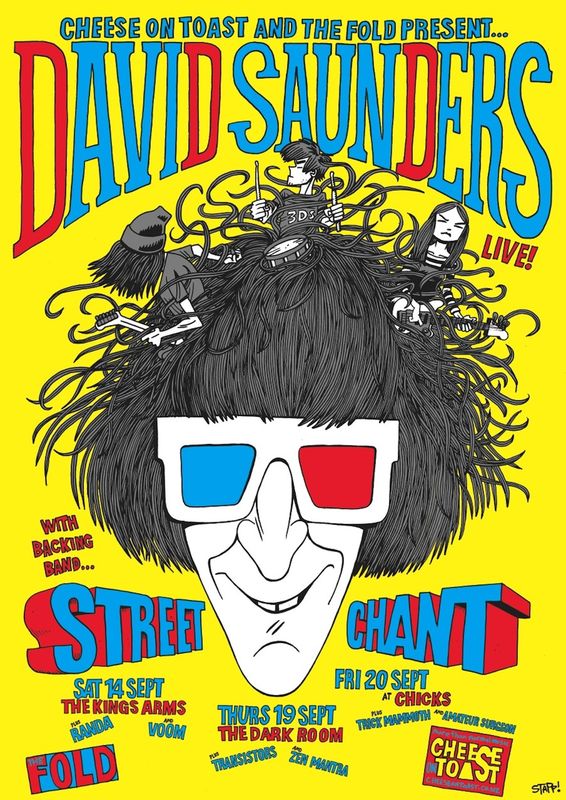 Yay! I will be seeing you at The King's Arms on September 14.

And before that, I will be going to to the Thirsty Dog pub on Karangahape Road next Friday, September 6, to hear Matthew Bannister perform Evolver, his cover of The Beatles' Revolver, which I raved about recently. The show also features performances from George Henderson, Sandra Bell and Feyodor. More details here.

So as not to keep everyone up too late, the show starts at 8pm. Bless.

Meanwhile, later in the evening ...

Julien Dyne has posted a sampler from his forthcoming album December (which, confusingly, is out at the end of September). It includes collaborations with Parks, She's So Rad and Mara TK and it sounds pretty amazing ...

Auckland's The Dastardly Bounder is back with this wiggy little acid dub that samples the famous video of British MP Christopher Mayhew on mescaline:

Remember I told you about Thomas Jack? The Aussie wunderkind has just posted a tremendous (and downloadable) house music mixtape:

And this great remix:

He appears able to do no wrong.

George Darroch has alerted me to this beauty, with the observation: "Delicate female vocals, a shimmering bassline and warm piano stabs. It's almost axiomatic this was going to be good."

Israel's Virgin Magnetic Material specialises in artful, unlikely remixes of indie classics. This one is both of those things:

And before we leave the dancefloor, we need some Totally 100% Gay Disco, amirite? I am!

Finally, for no particular reason, The Osmonds' 'Crazy Horses'. On one level, a clumsy Mormon white-boy attempt to grab some then-fashionable funkadelic goodness. On another level, still kinda great ...