It wasn't just that he chanted the question while Swarbrick was trying to answer his previous one. It's that it was a question she was in no position to answer. It was the wrong question. And only someone who had no idea what was actually going on would ask it. Sadly, this is where we're at with cannabis referendum "debate".

Swarbrick was eventually able to say that she wanted to a strict regime that would avoid the "Uberisation of cannabis" seen in some US states and prohibited commercial advertising. She subsequently explained that for her part she was communicating the Green Party position to the minister responsible for next year's referendum on cannabis legalisation, Andrew Little. Which was that there should be a law, debated and voted on by Parliament, which would contain a clause bringing it into force in the event of a positive vote in the referendum.

So the question – something else that Garner repeatedly demanded Swarbrick tell him – should be "Do you vote Yes or No to the Legalisation and Regulation of Cannabis Act?"

Some people have suggested a two-stage question, or even multiple choices. But this is the process recommended by constitutional lawyers. It has the virtues of simplicitly and clarity, and ensures that people know exactly what they're voting for if they vote "Yes". And it appears that this is the approach the government will take.

Amid the banalities of some of the media coverage, this is the critical thing that is missed: we have choices here. Our elected representatives will draft a bill and they will hear what we have to say about it in a select committee process. What we have to say will influence the final bill that Parliament votes on. And then we vote on that.

There are relevant and important questions to ask about what the bill should look like. One of Garner's attempted zingers, for example, was to put it to Swarbrick that "this big tax revenue" everyone was expecting "didn't happen". This is, of course, nonsense. In Washington State, five years into legalisation, cannabis industry tax revenues are booming; running ahead of forecasts to the extent that they're debating what to do with the extra money.

But it is true that in legalisation's first year in California, legal sales (and thus tax revenues) have been lower than expected: $2.5bn versus an expected $3bn. That's $500m less than the year before, when California's fairly loose medicinal cannabis regime was the only way to legally buy weed. There is now a political bid to try and increase tax revenue by lowering the excise rate.

But it's complicated. On the face of it, Washington's cannabis sales tax is more than twice California's. So why are its revenues booming? Well, firstly because its tax is relatively simple, while California levies different amounts in different ways on different parts of the industry. Moreover, regulatory compliance costs in California are crippling suppliers who are trying to go legal.

That last part is really important. There are two key strategic reasons for legalising and regulating cannabis. One is to get a handle on public health issues. The other is to curb the black market. And the two goals may at times be in conflict. The standard public health response to a harmful substance is to tax it punitively and make it really hard to supply. We're going to need to ask ourselves whether that's the right thing to do with cannabis; to look for the sweet spot in tax and regulatory settings.

One other lesson might be available from Washington state: authorities strictly limited the number of licences available at the time of legalisation. California imposed no limit on either the number of producers and retailers or the size of farms, but made the regulatory burden incredibly high. The evidence is that we probably don't want to be like California.

There a lot of other things we could and should be talking about – from testing for cannabis in the workplace and on the road to permission for home-growing and what should be done about historic convictions – but we're not. Instead we're getting the kind of empty clickbait being dished up by Garner and the AM Show.

I'm also getting more than a bit tired of people declaring that "a referendum isn't the right way to do this" like they're dispensing some grand wisdom only they have thought of. No, it's not (although it does have the merit of offering a very clear mandate if change is chosen). But it's what was politically available at the time – there simply wasn't a Parliamentary majority for legalisation in its own right. And more to the point, it's what's actually underway.

There is also a responsibility among Parliamentarians from all parties – who will vote on the law that we vote on – to take this process seriously, to stop making it a partisan issue and to develop a considered position on the manifold choices to be made. The National Party – and hence its social media cheerleaders – have shown little sign of doing so. Last week, Paula Bennett posted this on Facebook. 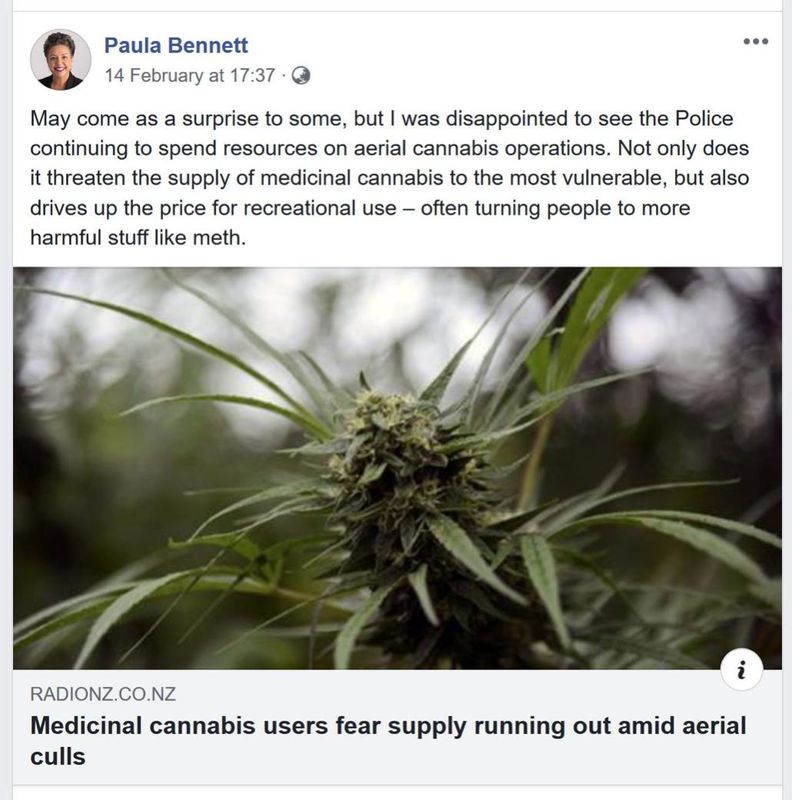 It's a nice enough sentiment. But it's completely at odds with her party's endless tub-thumping on the limited and temporary statutory defence for people in palliative care in the government's medicinal cannabis bill, – the provision repeatedly attacked by Simon Bridges as "decriminalisation by stealth". The "most vulnerable" people Bennett is sorry about not getting their medicinal cannabis are the same people her party wanted to have no protection from criminal prosecution. It's just maddeningly incoherent and it's not fucking good enough.

It's also incumbent on the government to communicate what it's doing and to consider all the issues as it frames the proposed law. I don't think it's a complete disaster if Cabinet decides not go go with a fully-worked-through law, if there's still enough detail for people to know what they're voting for, but it would be disappointing. Also, they need to crack on with this. There needs to be provision for a process and communication of that process in May's Budget. We need to be serious here.

Finally, and returning to the AM Show, I'm appalled that the show's producers have refused to provide sources for most of the claims Garner hurled at Swarbrick from his list of 12 bullet points. It's the most basic element of having a discussion about evidence. I think I might have tracked down the source of Garner's claims about students in Los Angeles and their attitudes to cannabis. It may have come from the comments here by the lead author of a study of the different ways LA  16 year-olds who have tried cannabis have used it.

I think the study has some issues: the assumption that vaping is somehow automatically of more concern than smoking in particular seems hard to justify. But that's not the main problem with quoting it as an argument against legalisation. That would be that all the field research for the study was conducted before cannabis was legalised for adult use in California.

Anyway, that'll do for now, but I'm interested in your thoughts and commentary on the issues raised here, links welcome.

And if you'd like to hear more from Chloe Swarbrick and you're going to Splore, come along to The Listening Lounge on Saturday morning.