When is a protected species not protected? When it gets in the way of fishing industry profits.

Fishers call this frigid sweep of green SQU 6T. That’s because each summer, millions of southern arrow squid gather here, in the cold subantarctic deep off the Auckland Islands, to mate. In the blackness of 200 metres, they whirl in an orgiastic throng. This is urgent. Arrow squid live for just a single year: they have this one chance to pay their DNA forward.

And it’s dangerous. New Zealand sea lions swoop out of the gloom, snapping at the teeming tentacles. The darkness is no defence; the sea lions’ big black eyes can see right through it.

These female sea lions are hunting at the edge of anaerobic load – a single breath – and they’re on the very limits of their endurance. Some have already swum more than 150 km to feed here, and time/depth recorders have shown they routinely dive beyond 600m – the deepest forays of any sea lion anywhere – for four or five minutes at a time.

That’s because everything depends on this seasonal spree. The females have a hungry pup back on shore – they’ve timed their breeding to coincide precisely with that of the squid. What’s more, they already have next year’s pup forming inside them. They need every gram of squid protein they can catch. 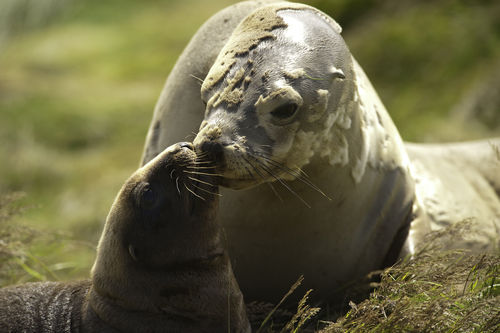 But they have to compete for it. The fishing industry has noticed this cornucopia as well: each season, around a dozen vessels ply these grounds, setting vast trawl nets as squid rise from the bottom to breed. Over the last five years, they’ve caught an average of 13,000 tonnes a year.

Every so often – 5.6 times every 100 tows, according to Ministry of Fisheries (MFish) data averaged over 16 seasons – they also catch a sea lion.

A sea lion trapped in a net will drown. They’re protected by law, but fishers are allowed to kill a given number each season – by way of a “Fisheries-Related Mortality Limit” calculated by the Ministry of Fisheries. If and when that limit is reached – when 68 sea lions are dead – the Minister is obliged to close the fishery, whether the trawlers have caught their squid allowance or not.

Much of what we know about by-catch on the high seas comes from the accounts of MFish observers posted aboard squid trawlers. But observer coverage has historically been patchy at best: fewer than 40 per cent of tows were typically observed, although in the last two seasons observation coverage has risen dramatically.

Skippers can get a ‘discount rate’ on their kill quota if they opt to fit a Sea Lion Excluder Device, or SLED to their nets. A SLED is a sort of steel cage in the net, the bars of which are wide enough to allow squid to pass through, but narrow enough to stop a sea lion, then deflect it up and out through a covered hatch atop the main net.

On their introduction in 2002, it was assumed that SLEDS would eject at least 20 per cent of sea lions entering nets. Under MFish rules, that allowed fishers to catch 20 per cent more sea lions before exhausting their kill quota.

Over the 2010-2011, season, the estimated sea lion strike rate dropped to 3.5 per 100 tows. Despite enormous statistical uncertainty, and contrary findings from DOC and University of Otago scientists, then-Primary Industries Minister David Carter accepted MFish advice that the lull justified a hike: in 2013, he upped the discount rate to a staggering 82 per cent. That had the effect of stretching out the squid season in SQU 6T to 4700 permitted tows – a 140 per cent increase and more than had ever been permitted at any time in its history.

Such is the faith the Government puts in SLEDS, but in 2002, Massey University vets autopsied 21 sea lions, six of were known to have been ejected from a SLED.

“The severe trauma described for many of the animals would likely have compromised their survival had they not asphyxiated,” reads the report, which makes repeated reference to the fact that many of the sea lions autopsied had regurgitated their last meal, a stress reflex with potentially fatal consequences. “Gastric reflux (vomit), if aspirated (inhaled into the lungs), can cause foreign-body pneumonia in animals that survive the initial impact.”

This is no way to talk about a critically endangered species, yet MPI and the fishing industry endlessly sing, in close harmony, the same songs of praise about SLEDS. Yet while net cameras show sea lions being ejected from nets, there is little evidence to prove they’re alive, let alone unharmed.

New Zealand sea lions need this like… well, like a hole in the head: females on the Auckland Islands now produce around half the number of pups their forebears did in 1998. That could be down to any combination of pressures: since 2002, the Auckland Islands colony has been afflicted by a bacterial infection, Klebsiella pneumonia. That first year, the disease caused a 20 per cent crash in pup production and has suppressed numbers ever since.

Then there’s the plain fact that a number of sea lions drown in fishing nets every year. While incident rates – and observed deaths – have flattened off in the last five years, Forest & Bird nevertheless estimates that more than 700 sea lions have been killed in SQU 6T in the last decade – not including the pups ashore that starve when mothers do not return, nor the unborn those females were carrying.

But the smoking gun, some think, is that the fishers are simply not leaving the sea lions enough squid to get into breeding condition. Or if they do, they can’t keep pups fed.

Elsewhere, this fisheries-enforced deprivation is well-documented. Steller sea lions in the North Pacific and southern elephant seals in the Antarctic have both been shown to produce fewer young in the face of competition from trawlers.

The fishing industry has remained silent about this. Instead, Seafood New Zealand chairman George Clement points the blame back at Klebsiella. “… this disease is a much bigger threat than fishing ever was.”

MFish consistently backs him: in a 2012 advice paper to Carter – the same one that called on him to raise the strike rate on sea lions – it said: “fishing is unlikely to be having a direct effect on the sea lion population that could be considered adverse.”

This is self-delusion. It is true that our sea lions face a whole raft of difficulties, but their numbers are now so low – their survival so tenuous (the Auckland Islands population could be extinct within 25 years) that any deleterious impact that can be mitigated damn well should be.

Last week, the International Union for the Conservation of Nature (IUCN) downgraded the status of our only endemic sea lion from threatened to outright endangered.

Under the Fisheries Act of 1996, the Crown is obliged to “avoid, remedy, or mitigate any adverse effects of fishing”. It is doing none of those things. If anything, the logic of kill quotas dictates instead that if it looks like being a bumper squid season, let’s just kill more sea lions.

Fishers could do the right thing. Trawling isn’t the only way to catch squid: in fact, it’s not even the accepted way. The vast bulk of arrow squid elsewhere – even around the New Zealand mainland – is caught instead by jigging, where squid are drawn near the surface by powerful lights, where they can then be hooked on lures dangled over the side of the vessel.

An observer report on non-target by-catch from squid jigging vessels off the New Zealand coast in 1999 recorded none: zip, nada, naff-all. The Ministry could easily stipulate that any Auckland Island fishing be done this way. But they won’t. The industry insists that the cost of converting their trawlers, or chartering purpose-built jiggers, is prohibitive.

That may be, but only because squid is actually an incidental bonus for the few New Zealand companies that trawl for it. It’s just a filler; a way to keep the trawlers working between the end of the hoki season, and the start of the southern blue whiting season (during which, incidentally, sea lions are also caught and killed. SLEDS were first deployed there in 2013 after a disastrous season). Factory trawlers cost a fortune to run, and even high-value hoki can’t keep them fed all year round.

It’s simple expediency. But in fact, both fishing effort and catches in SQU 6T have been declining in recent seasons, from just under 21,000 tonnes in 2010-11 to just 7400 in 2013-14. Much of it is down to economics and with Greece – once a major export market – no longer able to pay for delivery, is it really worth losing a species for the sake of such scant returns?

Sadly, when it comes to choosing between environmental stewardship and profits for export industries, we have a disgracefully venal record.