There is no definitive version of Pākehā disability history. My interpretation here may explain why disability was often viewed negatively, or is even invisible in the historical narrative.

Nineteenth-century New Zealand was settled by immigrants mainly from Britain and Europe who were prepared to endure a risky and lengthy sea trip for a chance of a better life. Although infectious illness and accidents were common, disability was unwelcome as it challenged the idea of a new society, and it could be a burden on others in a time when hard physical work was a daily necessity. So support was left to the benevolence of families or groups providing charitable aid.

The immigration acts that restricted the entry of Chinese in the late 19th century also banned ‘cripples, idiots, lunatics, infirm, blind, deaf and dumb’. The 1882 Imbecile Passengers Act required a bond from the person in charge of the ship before one of these ‘undesirables’ was discharged from the ship, and the 1899 Immigration Restriction Act went further banning the ‘idiot’, the insane and the contagious. 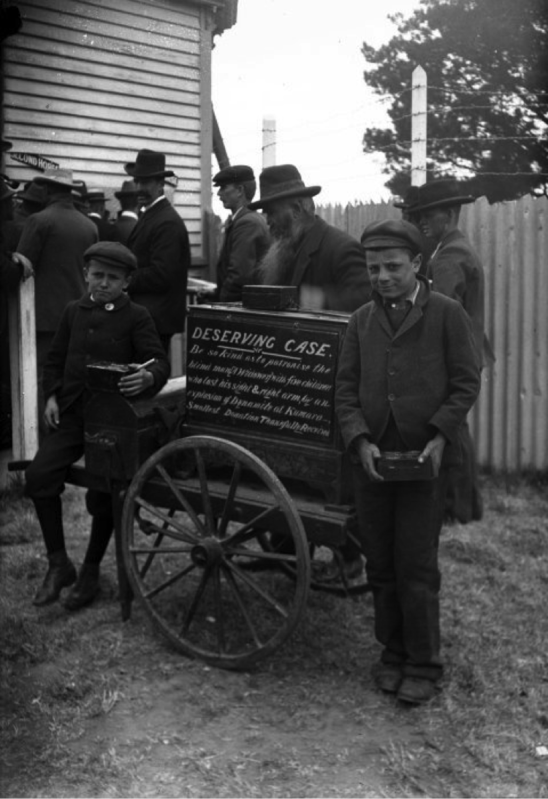 Jack (right) and Rudolph Lousich collecting donations for their father Louis Lousich. The sign reads: Deserving Case. Be so kind as to patronise the blind man a widower with five children who lost his sight and right arm by an explosion of dynamite at Kumara. Smallest donation thankfully received. Photograph taken ca 1897 in Kumara by Steffano Francis Webb. Alexander Turnbull Library Ref: 1/2-049635-G

Mental illness, then as now, was generally feared and misunderstood. A 1846 Lunatics Ordinance provided for public provision for incarceration of the mentally ill, at first in gaols. The first public ‘lunatic’ asylum was opened in Karori in 1854 and one in Porirua opened in 1887. Typically for the time, the Porirua asylum mixed several categories of ‘undesirables’: those with mental health issues, intellectual impairment, alcoholics, elderly and homeless people. For decades, these ‘inmates’ provided large captive communities for doctors and specialists to practice theories and interventions. Physically disabled people were often housed with old people in the ‘chronics wards’, established in the early 20th century in ordinary hospitals.

As New Zealand society developed, children began to be seen as more than just little adults or economic units. Their education became important and the 1877 Education Act provided free, secular primary school education. The Act’s purposes were for a better educated workforce but also government surveillance of children and their development. Rules and inspections were rigid.

As the 19th century progressed, so did medical and social policy, and some groups such as those with vision and hearing impairments, were seen as ‘habilitable’, meaning they had potential as worker citizens. Hence, the establishment of the residential schools which inadvertently provided the sites for deaf and blind people to develop cultures in opposition to oral and sighted cultures, and thus activism among these impairment groups.

The new century coincided with an increasing interest in the science of genetics and heredity initially raised by Darwin but developed by others into what is known as ‘social Darwinism’. In New Zealand these ideas were taken up by both liberals and conservatives who were concerned about the decreasing white middle class birth rate and consequent fears of losing their racial (and moral) supremacy.

In 1903 New Zealand-born W A Chapple published The fertility of the unfit which preached sterilisation for people with mental, moral and physical defects. The Eugenics Education society was founded in Dunedin in 1910 with an influential membership, one of whom was Truby King, the Medical Superintendent of Otago’s Seacliff Asylum. Theories and language linked intellectual impairment and some physical impairments like epilepsy to inferiority and moral degeneracy. Negative eugenists sought to limit fertility by public policy while positive eugenists supported interventionist policies to increase population ‘fitness’. 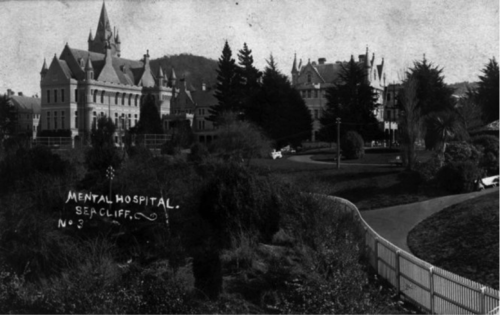 In this context, Plunket was started in 1907 to train mothers to grow healthy little citizens and soldiers for the empire. Founder Truby King, who had a physical impairment, later became Inspector General of Health.

He, his wife and supporters were positive eugenists who believed that teaching mothers the strict rules of scientific mothering would increase the fitness of the race. Committees of wealthy middle class women then took the ideology to the breeding populace. King was our local manifestation of the scientific mothering trend, and part of the international tradition of male experts telling women how to parent and then blaming them if anything went wrong. The mothers themselves of course were never consulted.

French-born nun Suzanne Aubert had personal experience of disability and was one of the few to speak out against eugenics. She founded her Home for Incurables in Whanganui in 1899 and, in 1907, opened her first Home of Compassion for all ‘needy’ or disabled adults or children in Wellington.

But certain types of intellectual impairment continued to be linked with ‘immorality’. So girls’ and boys’ homes and farm schools were founded mainly to keep the sexes apart and prevent criminality, deviant behaviour or reproduction. In 1908, Otekaike (Campbell Park School) near Oamaru was opened as a residential school for ‘feeble-minded’ boys and a few years later a similar residential school for ‘feeble-minded’ girls, Salisbury, was opened in Richmond, near Nelson.

These special schools were run by the Education Department, while Levin Farm, opened on the site that later became the Kimberley psychopaedic hospital, and Templeton near Christchurch, came under the Mental Hospitals Department. Differing classifications of ‘defect’ determined which government department was responsible for each individual.

The 1911 Mental Defectives Act classified groups of ‘other’ into six categories including idiots, imbeciles, feeble-minded and epileptics. The School Medical Service was founded to identify ‘defective’ children so they could be sent to the appropriate institutions and the 1914 Education Act made it obligatory for parents, teachers and police to report ‘mentally defective’ children to the Department of Education. The census of 1916 was the last time until 1996 that specific questions about disability were asked, possibly due to the lack of enthusiasm for self-identification.

In 1925 a Committee of Inquiry into Mental Defectives and Sexual Offenders  linked intellectual impairment with moral degeneracy and potential sexual offending, and sought to separate suspect parents and children. At-risk children could be taken off families and the short-lived Eugenics Board kept lists of ‘defectives’. A rare voice of protest was expressed by a mother about the proposed travelling clinics which would examine intellectually impaired children (Dr Gray was the Acting Inspector General of Health).

“Oh Mother, save me from Dr. Gray

And if I’m stupid he’ll take me away.

Oh, Mummie, save me from Dr.Gray!”

“I cannot save you, my little child.”

His Mummie said and her eyes were wild.

“You belong to the State, you’re no more my child!

But Oh, my darling don’t stupid be

And must be eradicated – you and me!”

After World War Two the revelation of the extent of eugenic policies in Nazi Germany (including the death of hundreds of thousands of disabled people) dampened overt policy enthusiasm for eugenics. However, it has never gone away and ongoing manifestations include occasional politicians urging limits on ‘breeding’ of undesirable groups such as beneficiaries. Many disability activists are concerned at the eugenic potential of genetic technologies such as pre-implantation genetic diagnosis, amniocentesis and other pre-natal testing to prevent births of ‘undesirable’, meaning disabled, children.

Life was often tough for disabled people and their families during the century following the 1840 signing of the Treaty of Waitangi and the official beginning of Pākehā settlement. They often faced widespread personal and policy discrimination, and lack of understanding and support. The establishment of the welfare state, and the rise of identity politics in the second part of the 20th century set the scene for disability activists to fight back. More about that story next time.