During the 1990s, some New Zealand disability activists, disenchanted with the inability of "the market" to provide appropriate or adequate support or services, targeted sympathetic Opposition politicians.

As mentioned in part three of this series , the activists taught them about the social model and disability rights. The election in November 1999 of the new Labour-Alliance coalition government provided a window of policy opportunity for a new partnership between politicians and the disability community.

Soon after winning the election, Prime Minister Helen Clark appointed the first Minister for Disability Issues, Ruth Dyson, who set up the Office for Disability Issues in the Ministry of Social Development (previously the Ministry of Social Welfare). Significantly, the Office would have a governance group of consumers – disabled people and advocates. In 2001, the New Zealand Disability Strategy (NZDS) was published after a lengthy consultation led by disabled people.

What sets the NZDS apart from previous disability policy is that it is explicitly grounded in the social model of disability:

Hence people are disabled by the system: ‘disabled people’. The Office for Disability Issues was charged with monitoring progress although legislative compliance with the NZDS was not required. Following the NZDS Strategy came reports such as the 2003 To Have an ‘Ordinary’ Life report which explained how the social model should work for adults with intellectual impairment in the post-institutional era. Other reports outlined requirements for disability support in education and employment.

During these years, New Zealand was actively involved in the drafting of the United Nations Convention on the Rights of Persons with Disabilities (CRPD). The chair of the Ad Hoc Committee chair was a New Zealander, several disabled people were part of the official delegation, and the Office for Disability issues provided research and secretariat support. Robert Martin, a New Zealander who had grown up in an institutions, addressed the United Nations in his role with Inclusion International.

The passage of the 2008 Disability Act to ensure New Zealand law was compliant with CRPD, and New Zealand’s ratification of the Convention in September 2008, were two of the last actions of the Labour-led government. 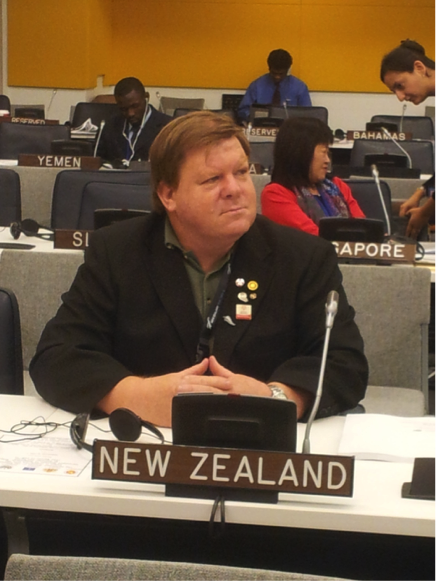 Robert Martin at the United Nations. In 2014 he was nominated for the international committee monitoring the CRPD. Photo from People First NZ

In summary, some highlights of the 2000s

However, things were not improving for all disabled people. Following concerns raised by consumers about abuse in post-institutional residential care, Parliament’s Social Services Select Committee consulted with the sector for an Inquiry into the quality of care and service provision for people with disabilities. The inquiry began in 2006 and its report and recommendations with cross party support came out just weeks before the 2008 General Election.

The new National Government’s response to the report was to establish a ministerial committee supported by some departmental chief executives and officials, and a 2010 Cabinet Paper outlining a "new model" of disability support.

Since then there have been various projects under the "new model", including Local Area Coordination in the Bay of Plenty, reviews of residential care, and extensions to Individualised Funding. Enabling Good Lives is a Christchurch and Hamilton based person-centred approach encouraging the Ministries of Health, Education and Social Development to work together to support the transition from school of a small cohort of local school leavers with high needs.

Progress included Paul Gibson’s appointment as New Zealand’s first Disability Rights Commissioner in September 2011. A Disability Action Plan 2014-2018 has been developed and a new Independent Monitoring Mechanism comprising the Human Rights Commission, the Office of the Ombudsman and the Convention Coalition (made up of Disabled People’s Organisations) now monitors the CRPD. New Zealand has not yet sign the Optional Protocol allowing individuals to take complaints to the UN under the CRPD.

Fifty years after the 1953 Aitken report led to the escalation of institutionalisation, Helen Clark’s Labour Government set up a Confidential Forum to hear the stories of abuse that resulted from that policy. The 2007 Te Aiotanga the Report of the Confidential Forum for Former In-patients of Psychiatric Hospitals contains testimony from residents and others in state care before 1992, as well as some family members and staff. Many were children – the youngest four years old – when they went into residential care. Although there were occasional references to kind and helpful staff, the report is grim reading.

A Confidential Listening and Assistance Service continued this restorative justice approach to hear stories from those in state care and from those denied human rights and personal identity but this Service is about to close, leaving numerous cases unaddressed. Many are hoping for an official apology for historic abuse.

Disability policy is a mixture of progress and retreat. Negatives included the reintroduction of work-testing on beneficiaries under the Social Security (Benefit Categories and Work Focus) Amendment Act 2013 and Funded Family Care (FFC).

FFC was introduced after the Ministry of Health lost a series of court cases seeking payment for family members to care for disabled people in preference to agency carers. A new section authorising the payment of family carers was inserted in the New Zealand Public Health and Disability Amendment Bill (No 2) and passed under urgency following the 2013 Budget. There are narrow eligibility criteria, the disabled person becomes the employer, and no complaints can be taken on human rights grounds. Not surprisingly only 187 families out of an anticipated 1600 receive the FFC payment. Some other supports, such as the Child Disability Allowance, have become harder to get.

Other legal victories against government in recent years have seen wins for minimum wage payment for residential care staff doing ‘sleepovers’ and for those doing carer relief, and pay equity for carers in residential accommodation. The IHC is heading an ongoing legal case against educational discrimination.

A major problem remains the funding discrepancy between ACC and Health which shows up starkly in funding and support comparisons between, for example, an adult using a wheelchair as a result of accident in contrast to a similar impairment as a result of a congenital condition or illness.

On the positive side is the educational achievement of many disabled students and there is now no excuse for disability policy and research to be undertaken without disability input and expertise, as in the rights slogan: ‘nothing about us, without us’.

Key to recent disability progress in New Zealand has been the strength of the relationship between the sector and previous Disability Issues Ministers Ruth Dyson (briefly replaced by Lianne Dalziel) and Tariana Turia. Despite 24% of New Zealanders identifying as disabled in the latest Census, the portfolio has low visibility and the Minister is often outside Cabinet. There is now a new Minister, National’s Nicky Wagner, who is yet to make her mark. Disability policy rarely makes headlines, but many of us care.

This is the last of my short series on aspects of New Zealand’s disability history. We walk backwards into the present and future recognising the lives and efforts of those who went before. Titiro whakamuri haere whakamua.