In parts one and two I covered New Zealand’s disability history up to the 1970s. From the 1970s the growing international disability rights movement developed what became known as the ‘social’ model of disability, whereby people have impairments but it is society’s attitudes that disable. For example, when a person who uses a wheelchair requires access to a public building the problem lies not with the person’s paralysis – the impairment – but poor building design that excludes the entry of some citizens.

Disability is thus the negative economic, political and social responses to impairment by a society built by and for non-impaired people and a disabled person is someone with an impairment disabled by society. To identify as a disabled person is therefore to adopt a highly politicised position which requires change to society’s values and structures.

In contrast the ‘individual’ or ‘medical’ model of disability sees impaired individuals as problematic or broken and requiring fixing. Their consequently lowered status can lead to institutionalisation or exclusion from participation in education, employment and other aspects of citizenship.

It is not surprising that the global disability rights movement developed out of the same 1960s ferment which encouraged women, youth, ethnic minorities, gay people and other marginalised groups to fight discrimination and reclaim civil and political rights. For disabled people, particularly those institutionalised and whose markers of identity such as personal clothing and possessions were often removed, it was not easy to organise into a strong advocacy force. But institutions also provided the sites for resistance.

A 1976 manifesto published by the London Union of the Physically Impaired Against Segregation (UPIAS) called for a change of attitude to disability policy.

Disability activism took slightly different paths in the US and the UK. In Britain disability studies developed within sociology departments and theorists adapted concepts such as power and oppression from Marxism. US disability activists tended to prefer an individualised anti-discrimination model in line with its constitution ‒ the 1990 Americans with Disabilities Act legislated for individual rights.

‘Nothing about us without us’ became the international slogan in the fight for nondisabling services and structures.

Disabled people and other disability lobbyists were also busy in New Zealand. Impetus was provided by the United Nations declaring 1981 the International Year of Disabled Persons. Funds raised by a Telethon (footage from NZOnscreen) went towards the establishment of Teletext, subsidised transport services and other services benefitting disabled people.

The formation of the pan disability organisation the Disabled Persons Assembly controlled by and for disabled people soon followed in 1983. Parents with disabled children established their advocacy group Parent to Parent the same year. People First, the consumer group for people with intellectual disability, was brought to NZ under the umbrella of the IHC in 1987 by JB Munro and Robert Martin (it later became independent).

A chapter on disability written by disability activist and later Human Rights Commissioner Robyn Hunt featured in the report of the Royal Commission on Social Policy in the late 1980s.

In a major advocacy victory Section 8 of the 1989 Education Act legislated for the right for all disabled children to attend their local school on the same terms as other children. Before then educational options were few.

However, despite the Royal Commission on Social Policy advocating more support for disabled people, incoming National Party Minister of Finance Ruth Richardson’s 1991 ‘Mother of all budgets’ chopped welfare. ACC provisions were also cut. Minister of Social Welfare, Jenny Shipley and Minister of Health, Simon Upton, promised new disability policy within financial constraints. Support for Independence for People with Disabilities – A New Deal was incorporated in the Health and Disability Services Act 1993. From 1994 most disability support services were transferred from Social Welfare to the Regional Health Authorities and funded by a capped and ring fenced budget from within Vote: Health. The landmark 1975 Disabled Persons’ Community Welfare Act was repealed. That act had acknowledged that the state accepted responsibility for the provision of many disability services and contracted CCS and IHC and other providers to provide the state’s services.

The market was now brought into service provision. A service provider tendered for the service via a contestable, detailed and competitive contracting process. Previously free services were now purchased by ‘clients’ from the state through Regional Health Authorities and service providers. Support was no longer a statutory right but dependent on available budgets, and disability became an individualised health problem. Access was through a new Needs Assessment and Service Coordination process, with strict eligibility criteria comprising only physical, intellectual or sensory (vision, hearing) impairment. The growing numbers diagnosed with Asperger’s Syndrome (autism without intellectual disability) were one group to miss out.

Two policy highlights of the era were the 1992 Mental Health Act which provided new processes including a complaints pathway, and the inclusion of disability in the 1993 Human Rights Act which made it illegal to discriminate on the basis of disability. DPA worked in coalition with gay rights groups to win this human rights struggle for both groups. Stories of abuse in institutions such as Lake Alice continued to filter into the media.

By the mid 1990s the neoliberal market model of disability support was under stress as the capped budget was not enough to provide required services, particularly at a time of high unemployment, market rents for state housing, and compulsory work testing for all beneficiaries. The killing of autistic teenager Casey Albury by her mother in 1997 occurred in this context. Following investigations a picture emerged of fragmented and inadequate services and lack of family support.

Meanwhile the success of the 1989 Education Act meant the state was supporting two systems: increasing numbers of disabled children at regular schools, as well as in numerous segregated environments. Considerable regional variation had also developed. The Government’s response was the controversial 1995 policy of Special Education 2000. Its aim was to promote mainstreaming of children with ‘special educational needs’ in regular schools and to close units and special schools. Unfortunately resourcing to support mainstreaming was highly inadequate. Legend has it that a Treasury official decided that only 1% of children would require targeted assistance, which was implemented through an Ongoing Reviewable Resourcing Scheme via a complex application and faceless verification system. There was widespread opposition to this policy from parents including a group who took the government to court. A review of Special Education 2000 was one of the Labour Party’s 1999 election policies. 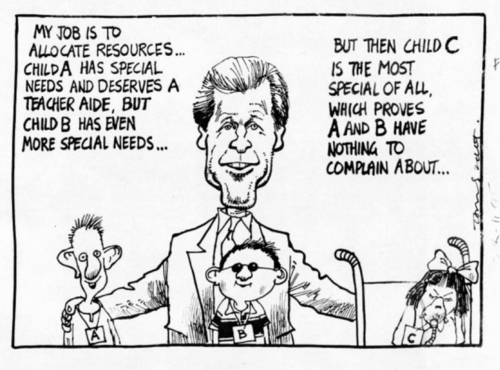 The neoliberalism of the 1990s was a difficult time for many disability activists although the rights movement continued to grow. They had instead been building relationships with opposition MPs, such as Labour’s Ruth Dyson. A window of policy opportunity opened with the election of the Labour-Alliance Government in November 1999 and a busy decade would follow. That’s in part four.