This is a sculpture of a cock.

This is also a sculpture of a cock, with added balls and Movember-worthy pubescaping. 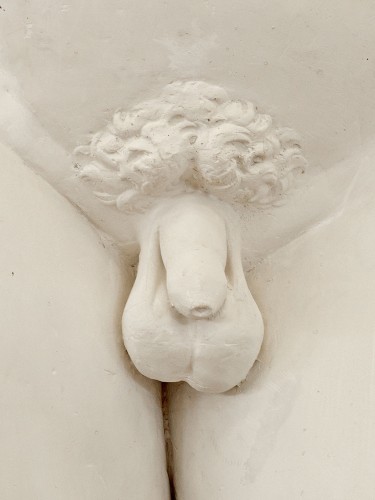 (Detail of a Plaster cast of original statue of 'David', by Michelangelo, Florence, Italy, 1501-4. Cast by unknown maker, Florence, Italy, about 1857. Currently in the collection of the Victoria and Albert Museum, London.  Fun but probably fake fact: Queen Victoria was so unamused this drop dead stylish fig leaf was promptly commissioned.)

However, if the following resembles any man-parts of your acquaintance, you have my condolences and a desperate plea that you encourage the owner to seek medical advice. This is a copy of The New Zealand Herald trying to keep that thrill of Catton-related cultural outrage going, with an unusually half-hearted freak out from Bernard Orsman.

To be fair, it was a long weekend and perhaps we should be thankful Orsman is finally fixating on a publicly-funded penis not attached to the incumbent mayor. I'm sure the reliably fatuous Councillors Brewer and Quax are on the case, and the usual suspects at the Taxpayers Union and Family First will denounce this outrage to public morality and public finances.

But I assure faithful readers, yesterday, your faithful Muse and his Better Half passed on the Big Gay Out to hang around an New Lynn alley looking for giant ratepayer-funded peen to be outraged by.  We're very easily outraged.  I even took many many photos, a tragically unsalacious selection of which I'll upload when the broadband decides to start behaving.  But, God, finding something even mildly filthy was a lot of hard work for little satisfaction, and I think I put my neck out.  Pained nostalgia for my slutty youth? Sure.  A rather pleasant afternoon spent in a part of town where development seems to be improving things rather than making it worse?  Probably.  But a full-scale moral panic just failed to happen.

Her considered crticial opinion: "I'm not really seeing it."

I was tempted to ask her if she'd like to come with us to Point Chev and go cruising for some dick that might live up to the hype.  Sadly, I bottled out, but she taught us all a valuable lesson:

Cock and balls, like everything else, really is in the eyes of the beholder.   And if you like that kind of thing, who am I to judge?