I blogged on the government's quiet moves to "expand" the International Travel perk for former* MPs (and their spouses) on Friday. [*if they were elected before the 1999 election]. I tweeted my post on Saturday, and got some traction - enough, it seems for a couple of MPs to indicate they didn't support the change (which, as the changes are in a statutes amendment bill, would be more than enough to defeat it). I will note at this point, that while the changes do increase the current value of the perk, that is only over its value since 1 July 2014, the changes return it to the value it held before that time. However, this does not necessarily mean the changes were an oversight of which MPs were unaware when they passed the law - they language the MPs themselves inserted is very clear.

The MPs who interacted with my tweets indicated they had no idea what it was about, so I wondered whether the Government had gone through the usual process of advising other parties of their proposals (this is the process for statutes amendment bills because, with one vote being enough to defeat any amendment, the Government's wasting its time if they don't get that support in advance). I've filed an Official Information Act request seeking the background to this change, including over what information was provided to other parties, but Annette King tweeted again today:

It's nice to have this confirmed, as I couldn't see why the government would not have done it, but it remains to be seen how clear the government was about the financial cost of the change when it consulted.

Was this a mistake? I’m not sure that matters, because even if it is a simple oversight, that does not mean that it is appropriate to fix it by a supplementary order paper to a statutes amendment bill released on a Thursday, to be adopted in a single debate the following Tuesday. But let’s look at this anyway.

Parliament passes a lot of law, and occasionally, words get drafted into those laws without MPs or officials realising exactly what they mean. Many of the other laws amended in Statutes Amendment Bills over the years have been fixed such mistakes. Is this one of them?

Importantly, the rules that the law was replacing (.pdf), did set the maximum international travel perk by reference to the cost of an Air New Zealand business class fare:

If the new law was intended to just adopt the old rules in a different place, then there was a mistake.

There was no reference to Air New Zealand in the initial version of the Members of Parliament (Remuneration and Services) Bill, but, perhaps more importantly, nor did it include the word “lowest-cost”.

And that is why we can be confident this was not a simple oversight by our MPs – the word “lowest-cost” is there because it was added by the select committee: 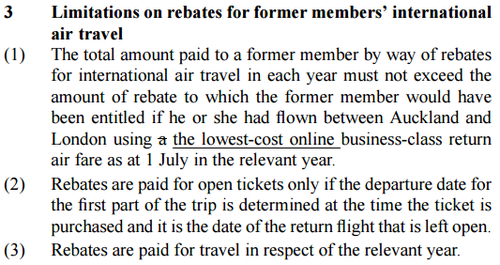 It was a deliberate decision. I don’t think it can be seriously suggested that, in adding the word “lowest-cost” MPs on the Government Administration Committee were doing anything other than knowingly setting the maximum international travel perk except by reference to the lowest-cost business class airfare. And we have a pretty good insight into why this change was made: the Cabinet Office advised them to.

With ministerial agreement, officials from Government Departments provide government advice to select committees considering bills. When considering the Members of Parliament (Remuneration and Services) Bill, the Government Administration Committee got advice from quite a few; primarily, the Cabinet Office of the Department of Prime Minister and Cabinet. Two bits of that advice are important: first, it noted that the bill mirrored the substance of the old rule, and then a few paragraphs later recommended the insertion of the words “lowest cost”. The advice gave no reason for this substantive change, but was adopted nonetheless.

What officials intend with particular language and what MPs intend with it are occasionally differnt. It seems possible that, in the context of other advice about how the first draft of bill might accidentally change others aspects of the International travel perk, the MPs present may have thought this change was proposed by officials to ensure the law didn’t change, or they may simply have been following departmental advice without thinking about it at all. But it is also clear that they did know exactly what law they were passing. This is not a case where a mistake means the law includes unintended language, but it may be a case of a law including unambiguous language, that everyone intended to include, knowing exactly what it meant, because they mistakenly thought that it what the old law said, and no-one could be bothered checking.

In the end, that probably doesn’t matter. What we are discussing is not whether there was an error that ought to be fixed; we are addressing whether it is appropriate to remedy any error there may have been by a supplementary order paper to a statutes amendment bill, released on a Thursday, to be finally debated the following week. And it isn’t.

Worst case scenario: former MPs taking their annual taxpayer-funded overseas holidays have to fly Business Class with Malaysia Airlines instead of Air New Zealand, or can fly Air New Zealand, but have to holiday in Honolulu or Singapore instead. That simply is not sufficiently egregious to warrant such urgency.

Of course, the travel perk isn’t the only thing being amended in this SOP. The other changes have a little more going for them, but probably still not enough to really justify avoiding the scrutiny of a select committee and the public.

Regular readers may recall a post looking at the financial incentives involved in the Te Tai Tokerau by-election, I noted that once Hone Harawira resigned, his pay and perks stopped. He got one more return flight to Wellington to clear out his office, and that was it. It seems that since the Members of Parliament (Remuneration and Services) Act entered into force, MPs who resign don’t even get that final office-clearing return flight.

That was apparently an oversight, and the type that could properly be fixed in a Statutes Amendment Bill. But, while I can see why the Parliamentary Service might want to remedy it quickly, I’m not sure that the consequences of waiting for the next statutes amendment bill (there seem to have been four going through various stages during the last Parliamentary term) are so dire that the ordinary processes shouldn’t be followed. There will, no doubt, be several legislative tweaks in the next one, that just missed the cut-off for this one, and will have to go unremedied for that extra year. I assume in this instance retiring MPs would simply be advised to clear out their offices while they’re still MPs (and some might give notice that has their resignations take effect a couple of days later to allow this to happen). This isn't going to see the IRD unable to collect hundreds of millions in taxes, or convicted burglars set free.

But, while I don’t think the other changes this SOP brings in need to be processed so quickly, you choose your battles, and I’m probably ok with them, while noting that we send bills to select committees for goods reasons, and one is that sometimes that gives officials, or members of the public, the chance to pick up mistakes. I can’t see a problem with the others changes, but I’m certainly not going to declare them error-free. MPs can object to individual clauses in a statutes amendment bill, so an MP could object to the bit amending the travel perk while allowing the other bits to stay.

So the question we now have, is, will this pass? It only needs one vote against, but it’s a bit of a movable feast. I have the Stuff story open in four different tabs, carrying four slightly different stories. The first notes (I think based on tweets) opposition from a range of MPs, but that has gone from later versions of the story. The latest story I have seen indicates that Annette King has shored up support from New Zealand First and the Greens. We may find out on Tuesday.