The following is an advertisement publicly released today by the Vote for Change group: 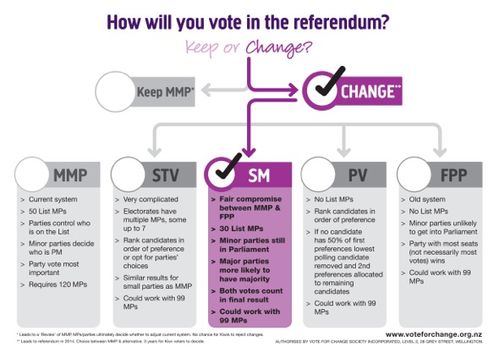 Seriously, how hard is this to get right?

It contains an error that has been repeated throughout the campaign. In this instance, however, it appears not to be a mistake, so much as a deliberate vote suppression tactic. The graphic clearly implies that people who vote to "keep MMP" do not also get to vote on which system they'd like MMP to face off against if it comes to a second referendum.

Given I pointed this out to Vote for Change before this was released to the wider public, I can only assume a deliberate choice was made to leave it as is, perhaps to increase the likelihood that people who want a say in the second question will vote for change in the first despite it not being their real preference, or out of fear of invalidating their vote.

This is something I am going to repeat as often as is needed.

Everyone who votes in the referendum gets to vote in both questions if they want to. They can also choose to vote in one and not the other without it invalidating their whole vote. And even if they cast an invalid vote in one part, as long as the vote in the other part is okay, it will still count.

Jordan Williams, the spokesperson for Vote for Change, states that the advertisement was not an intended to be independent, and was designed to promotes change to the supplementary member system. Vote for Change considers that the only way to get an improved voting system is to tick change.

For me, that isn't good enough. An advertisement can promote change without falsely implying that voters must tick change in order to vote in the second question. And it could have easily have avoided creating that impression by either having a greyed out arrow from keep MMP to the other options, or by only having the purple arrow and not having greyed out arrows at all.

UPDATE: Vote for Change have updated their referendum decision tree, meeting my objection, and have also added an additional footnote explaining that any change to the number of MPs will not come through the referendum, but through the separate constitutional review. 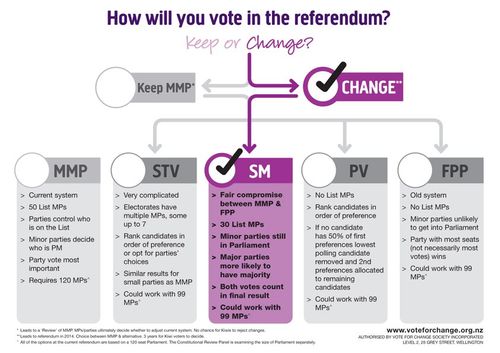