I have a half-written post on the sentencing of Nikolas Delegat. Since the news of the sentence became public I’ve read the news reports, and responded to comments on twitter and Facebook.

The sentencing seemed utterly unremarkable. I planned to say so. A first-time offender, 18 years old at the time of the offence, facing a charge of assaulting a Police Officer in the execution of her duty (which carries a maximum sentence of 6 months imprisonment) is simply not going to get a prison sentence after a guilty plea, at (technically) the first opportunity. And not qualifying for a prison sentence means home detention is out too. The maximum number of hours of community service someone can be sentenced to at one time is 400 hrs. You get a 25% discount for an early guilty plea. That makes it 300 hours. Add reparations on top of that. Easy. I was going to lay the blame on the police/prosecution for agreeing to guilty plea to such a minor charge if they wanted to complain about the sentence afterward.

But this isn’t that blog post. Because, as careful as I am on Twitter, I’m more careful when I blog. And part-way through the writing of my blog post (which to be honest, was going to carry little more information that the preceding paragraph) I figured I should read the sentencing notes. They’re rather sparse, because the judge also issued a judgment on Delegat’s application for as discharge without conviction. He lost that, and a conviction for violence is a pretty big penalty by itself if you’ve no previous record, and I was going to say so.

That blog post will remain uncompleted, merely summarised above. Because I have read the judgments, and I now know what Nicholas Delegat was actually convicted of. I apologise to the New Zealand Police for the tweets and comments I have made suggesting that it was their fault, or that of the prosecution, that a sentence of imprisonment was never even a remote possibility given that they agreed to a charge of assaulting a police officer in the execution of their duty. Because it turns out they didn’t think the assault so unserious so as to agree to a guilty plea to that most minor of all assault charges.

Oddly, I’ve had (I think) three conversation over the last few weeks with different people about Gell-Mann amnesia. It seems I am as prone to it as everyone else. Thankfully, I think I admitted that it all my conversations about it. It’s the observation that when the news media cover something you are intimately familiar with, you will almost always notice glaring errors, but when you read or watch a different news story, even in the same paper or bulletin, about an issue with you are unfamiliar, you will forget what you just noticed, and assume the basic facts in the story are true.

What of that editorial? I shouldn’t be too harsh, as it was the reporting that made so little sense, that it encouraged me to seek the judgment early in the process of composition. The way charges are described in charging documents, which tends to make it into on-the-fly sentencing notes as here, bugs me a bit, and can be profoundly misleading to a lay reader trying to match it up with a particular offence. The judgments describe the offending as the Herald did, and I suspect the Herald was led into error on that basis. But the judge also mentions the section under which Delegat was charged: section 192(2) of the Crimes Act.  The heading of section 192(2) of the Crimes Act is "Aggravated Assault". That should be a clue that the Herald editorial makes a couple of exceptionally odd statements:

He first appeared in court five days after the attack when he was charged with the aggravated assault of Kane, an offence carrying a maximum sentence of seven years' imprisonment.

…the case went back to the Dunedin District Court in June, when the aggravated assault charge was downgraded to assaulting a police officer with intent to obstruct her in the execution of her duty. The offence carries a three-year jail term.

The charge of assaulting a police officer acting in the execution of their duty carries a maximum of six months’ imprisonment. But the words do also describe the elements of the offence of aggravated assault. Such double-ups aren’t that unusual: the elements of summary offences act common assault (max 6 months) and the elements of the charge of common assault in the Crimes Act (max 1 year) are identical. But nonetheless, it is a charge labelled as aggravated assault in the the Crimes Act that Nikolas Delegat was convicted of.

The misunderstanding permeating and emanating from the media lead to a cartoon (I'm told by Moreu, and appearing in the Timaru Herald), which is particularly unfair to Minister of Police Judith Collins. 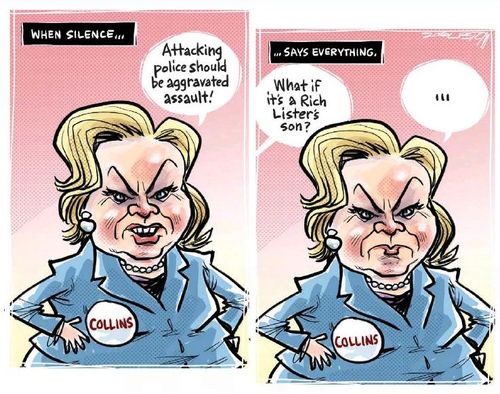 The Minister of Police shouldn’t be commenting of sentences before the appeal period is up in the first place, but criticising a Minister for not holding firm on the proposition that people who assault cops should be charged with the more serious aggravated assault charge (rather than the less serious assault on Police charge) is ridiculous when you are discussing a case where the person pleaded guilty to a charge of aggravated assault.

So, news media, you suck at this. Why, in the biggest criminal justice story in New Zealand for several days, did not a single news article (well, not a single news article accessible on google news at any rate) mention what the person at the centre of it was actually convicted of? Several news articles mention both Nikolas Delegat and “aggravated assault”, but only ever in the context of it being the charge he originally faced, which appears not to be true..

Stuart Nash, you suck too, assuming that the quotes from you in this Herald article is accurate (and, because I already seem to have forgotten what I’ve just written, my assumption is still that it is). First, you shouldn’t really be calling on the Government, and especially the Minister of Police to interfere with a prosecution, which you are reported as doing here:

"The Prime Minister and the Police Minister must come out and condemn the sentence as totally inadequate and state that Crown Law will appeal. This would send a very clear message that this type of behaviour against police will not be tolerated by our communities and offenders will be punished accordingly."

But mostly because, in light of the actual facts in this case, this a is a monumentally stupid criticism to be reported as making after someone has been convicted of aggravated assault:

"The proper charge for punching a police officer is not plain assault, but aggravated assault, which includes attacking an officer in the line of duty and carries a maximum jail term of three years."

And, of course, I suck too.